View All From You
Share
IOWA Alumni Magazine | December 2010
In The White House Garden
By Dan Zinkand
Agricultural journalist Dan Zinkand, 90MA, reveals what he learned while getting his hands dirty. 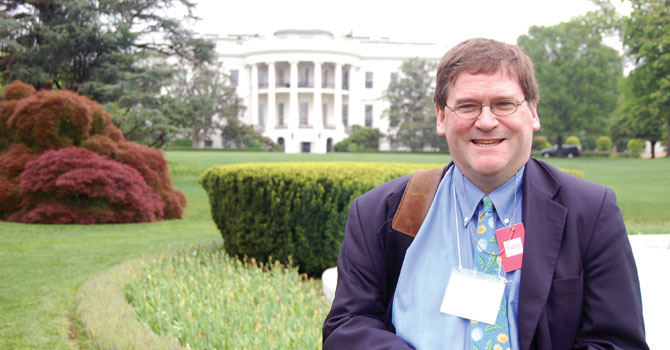 I kneeled, picked up some soil, and rubbed it between my fingers. It was light and sandy. Despite my curiosity, I didn't take it. After all, I was a guest at the White House.

Along with some other journalists, I visited the First Family earlier this year to learn more about the White House's highly publicized vegetable garden—the first since Eleanor Roosevelt grew one more than 65 years ago.

This project, which was Michelle Obama's idea, is tucked off to the side of the south lawn. At just 1,500 square feet, the world's most famous vegetable garden is small compared to the thousands of acres tended by farmers, ranchers, and others involved in production agriculture.

Still, this modest plot is significant. As well as showing Americans where their food comes from, it represents a giant, positive step toward helping people learn about the joy, complexity, and utter disappointment of farming.

Although the garden isn't certified organic, it receives no synthetic fertilizers or pesticides, and it has to survive on rain and hand watering rather than irrigation. Every agricultural producer or backyard farmer who has lost crops to deer, geese, or other pests will be delighted to hear that squirrels attack even the nation's First Kitchen Garden. (No, the Secret Service doesn't take care of the marauders.)

The real genius of the White House kitchen garden is that Michelle Obama decided to do it at all. After all, she could do anything in the world. Everyone involved in agriculture should stand up and cheer that the business of growing food and feeding people is receiving such attention.

I'd encourage the First Lady to enlarge the garden, invite in more children, adults, and the media. Let them kneel down to weed and water. Let them get dirt on their clothes and under their fingernails. There's a lot of room on the south lawn of the White House, which slopes down to a massive wrought-iron fence. As a native Iowan, I'd like to see a huge patch of sweet corn. Maybe even a corn maze.

Realistically, I know that the White House is landlocked. But its garden wields influence by raising the profile of how people should tend the land to reap its riches. One of those ways, of course, is to add organic matter to build the soil. An integral component of any compost bin is carbon, which is readily available in the form of newspapers.