View All From You
Share
IOWA Alumni Magazine | August 2010
Good Business
By Kathryn Howe
At a time when the corporate world seems to have lost its integrity, the University of Iowa aims to restore some old-fashioned values.

Two months after the offshore rig Deepwater Horizon exploded and oil began to hemorrhage into the Gulf of Mexico, BP CEO Tony Hayward appeared before a congressional subcommittee. With the look of a man who hadn't slept in days, he took a seat before a microphone and prepared to answer for his energy company's culpability in the worst oil spill in U.S. history.

The company faced accusations of recklessness, of questionable safety practices, and negligent operational standards—missteps leading this past April to an accident responsible for the death of 11 people and the rupture of a sea well that belched thousands of barrels of oil along more than 120 miles of coastline. On the day of Hayward's June hearing, the leak continued to threaten the Gulf's multibillion-dollar fishing and tourism industries and the health of area residents. Newspapers and websites carried harrowing images of oil-drenched and dying birds, turtles, and fish. By the time of the hearing, public anger and outrage had reached a boiling point.

Tony Hayward made a lot of statements that day. Among them, he offered this: "I give you my word that we will do the right thing. We will not rest until the well is under control."

Do the right thing.

Hollywood director Spike Lee turned that phrase into a feature film. Leaders at the UI Tippie College of Business have transformed it into an educational philosophy.

At a time when successive scandals have battered public trust in the corporate world, Tippie Dean William "Curt" Hunter and his colleagues believe the UI program owes more to its students—and society—than just practical training in disciplines such as accounting or finance. Hunter contends that the college has a civic obligation to cultivate a strong and unshakable sense of ethics and values in its future business leaders. From the "Integrity" element of the school's "Power of I" brand (also including "Innovation" and "Impact," the principles on which Tippie builds its programs) to an intensive MBA ethics course that challenges students to solve complex moral crises, the college stresses the importance of critical thinking with a conscience.

"We teach our students that, in the long run, ethical behavior wins out," says Hunter. "Woven throughout our curriculum, we reiterate the value of trust and credibility in any business relationship. Our young people need to understand that if they don't have that, they're not going to be successful."

In a world where good guys seem to finish last, wannabe entrepreneurs may question such statements. But, in recent years, gross errors in honesty and judgment have landed big dogs in hot water and toppled many a corporate Goliath. Before BP, there was Enron. In 2001, deceptive and dishonest executives at that energy company managed to hide billions of dollars in failed deals and projects from their board of directors, auditors, and shareholders, ultimately leading to one of the largest corporate bankruptcy filings in history.

No wonder Hunter maintains it's far wiser to emulate George Bailey rather than Gordon Gekko. 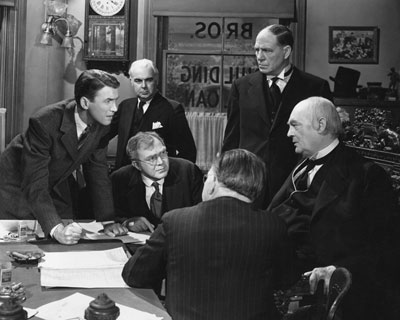 In the 1946 classic movie It's a Wonderful Life, James Stewart plays George Bailey, a compassionate, hardworking businessman who digs deep inside his own wallet to help struggling customers at his Building & Loan. Some 40 years later, another film stamped an iconic "greed is good" image on the business world. In Wall Street, Michael Douglas offers a mesmerizing performance as Gordon Gekko, a ruthless raider who illegally seeks inside information and stops at nothing to cut a lucrative deal.

As a man with values, though, George Bailey (pictured at right in a scene from the movie) eventually triumphs. Hunter says that's not just a feel-good Hollywood message; it's the truth.

"Without doubt, there are people who steal, cheat, make lots of money, and get away with it—but they are always at risk of losing everything with one fatal flaw. You don't have to worry about any of that if you do the right thing," says Hunter, who previously worked for the Federal Reserve, the central bank of the United States of America. One of the most ethical organizations in the world, the Federal Reserve depends on its impeccable reputation to effectively manage and secure the country's entire financial system.

The current Tippie curriculum, as well as that of other highly regarded schools, is partially a response to the disheartening business problems and scandals of the last two decades. For a period of years until the early 1990s, the UI offered ethics courses in its business requirements, but then discontinued the track to make room for other necessary classes. At other institutions, too, ethics slowly became less of a priority.

UI management and organizations professor Nancy Hauserman*, 76JD, characterizes the ensuing corporate crises as a symptom of the loss of the ethics emphasis and a hyperfocus on the bottom line.

Now, business schools like the UI have readjusted their programs and placed ethics back on the radar. While Tippie's main drive comes at the MBA level through its LEAP program (a series of courses that stress "Leadership, Ethics, and Professionalism"), faculty in all the functional areas and at every level take the opportunity to incorporate discussions about ethical dimensions into their material.

In fact, such debates take place in classrooms across campus. Course offerings from various academic disciplines and departments include "Journalism Ethics" in the College of Liberal Arts and Sciences, "Clinical Research Ethics" from the College of Public Health, and "The Law and Ethics of Organ Donation" in the College of Law.

Through the business school's undergraduate "Introduction to Law" class, Professor Lon Moeller touches on business ethics and corporate social responsibility, showing clips from films like Office Space and Enron: The Smartest Guys in the Room, as well as a PBS special on disgraced financier Bernard Madoff, to emphasize the consequences of unethical and illegal behavior. He's also taught a first-year seminar titled "Business Ethics: An Oxymoron?"

Moeller believes business is experiencing an upward trend of "good" and "ethical" behavior as consumers and employees reward socially responsible companies with their money, support, and loyalty.

"Shareholders are demanding more of corporate management in terms of acting in both a legal and ethical manner," says Moeller, 82BBA, 84MA, 87JD, who is also associate dean for Tippie's undergraduate program. "Many of our students are involved with volunteering and are looking for companies that promote community service and share their ethical values."

Many students first begin to really evaluate and prioritize such values in the ethics portion of the LEAP program. At Tippie, the MBA experience moves beyond technical training to prepare students to thrive in the competitive, often cutthroat business world. A four-semester, interactive educational experience, LEAP provides skill development in the areas of leadership, ethics, career function, and career professionalism. The ethics component—reinstated a couple years ago—features a new and comprehensive curriculum that includes exercises and activities (many outside the classroom setting) to help students grasp the gray and often subjective concept of ethics.

With Hauserman at the helm, the course creatively covers many topics. Her syllabus is likely the only one on campus that includes a reading of the Tony award-winning play Death of a Salesman, a debate over the ethical consideration of the sale of body parts, and a project that requires students to research and identify a charitable organization to which they'd like to donate money (as a lesson on the importance and impact of selfless philanthropy).

The professor's overarching goal is to expand and enhance problem-recognition and problem-solving skills. In key assignments, she presents students with several ethical dilemmas, asking them to make and defend decisions that consider the big picture—that weigh their own values with those of their hypothetical corporate employer, shareholders, individual personnel, and society as a whole. Rather than assume that only one response to an ethical problem is correct, students are encouraged to identify multiple "right" responses and then explain what priorities and values are reflected in the different solutions—as well as the consequences.

"What is a good decision?" asks Hauserman. "Ethics is about the way that people make decisions. It's all about the thought process. If your process is sound, your decisions will be ethical. To me, an ethical thought process is one in which people have broadly and thoroughly considered their actions."

Her students tackle subtle and complicated conundrums. One assignment challenges them to determine how an employer should approach a longtime, loyal employee caught taking money from the company to cover medical expenses for a sick child—even as she tries to slowly pay it back through her own personal checks. Another asks students to advise an NFL team on whether it should hire Michael Vick, who has served his jail sentence for a dog-fighting conviction and is ready to return to football. Some students recommended hiring Vick based on values of forgiveness, compassion, and the obvious advantage of his athletic talent, even as others gave the thumbs down when considering the importance of trust, honesty, and team cohesiveness.

Such exercises are similar to the types of dilemmas presented in another aspect of the college's above-board efforts: the Mary Thomas Prappas Business Ethics Essay Competition—established and supported in 2007 by Mary*, 49BSC, and Dempsey Prappas*, in an effort to cultivate conscience in the next generation of business leaders. The couple also committed funds that same year to the creation of the Mary Thomas Prappas Chair in Business Ethics to support faculty teaching and research.

Living in Houston, the Prappases had front-row seats when Texas-based Enron went up in smoke—and they grew increasingly discouraged at the lack of discipline and courage in the once-celebrated corporation. Says Mary, "We felt the corporate world had lost its way."

The couple decided the endowed chair and essay contest could make some small contribution to change, and the Prappases have been inspired by student participation in the writing competition, as well as the college's overall commitment to ethics. By all accounts, students appreciate the opportunity to critically analyze what "being ethical" means.

"I grew up with the idea that an ethical person simply does the right thing when no one is watching," says business student and 2010 essay writer Heather Fomon. "I have come to the conclusion that there are no set rules. However, across the board, I believe an ethical person views a situation from all perspectives and makes a decision for the greater good."

Dempsey Prappas says he's not really surprised by such positive responses. After all, Midwesterners are known for their integrity. He recalls a Chevy dealer in Iowa City who repaired his car bumper after a fender-bender accident.

"Once the repairs were done, he reduced the bill from $2,000 to $1,100," says Prappas. "He could have charged me for his original estimate, but he didn't end up needing to do that much work. How many people would do that? I was so moved by the honesty of that Chevrolet dealer."

Clearly, Iowa produces its share of George Baileys. The UI intends to keep it that way.