10 Favorite Hawkeyes of All Time

By Megan Walsh
3 minute read
From James Van Allen to Caitlin Clark, these Hawks rose to the top. 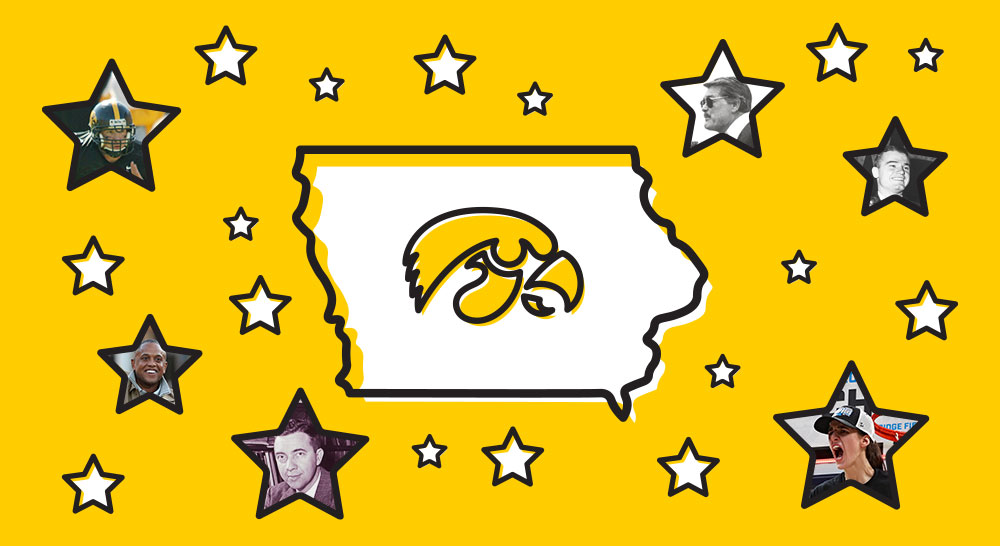 Equipped with a University of Iowa education, Hawkeyes go on to achieve the extraordinary in all they do. They rise to the top of their careers in business and health care, create artistic masterpieces, and give back to the community and the world.

So, we asked you on Facebook and in the Iowa Newsletter: Who is your favorite Hawkeye of all time?

But like a favorite movie or song, it’s hard to choose just one. The Hawkeye community answered with legendary coaches, Hollywood’s finest, professors who made an impact, and their own Hawkeye children, grandchildren, and spouses.

Fry served as head football coach from 1978 to 1998. Fry is known for guiding the development of the now-famous Tigerhawk, creating “The Swarm,” and leading the Hawkeyes to their first victorious season in 19 years.

Williams (38BA) is known as one of the top playwrights of the 20th century. Williams’ most notable works include A Streetcar Named Desire, The Glass Menagerie, and Cat on a Hot Tin Roof.

Van Allen (36MS, 39PhD) pioneered space research at the UI and discovered the Van Allen radiation belts. The late physics and astronomy professor’s legacy is still present in the classroom today, where he’s referred to as the “Father of Space Science.”

Still the sixth-ranked basketball player in Hawkeye history, Armstrong (89BA) became a fan favorite during his years at Iowa. After graduating, he was drafted by the Chicago Bulls in the first round of the 1989 NBA draft and won three NBA championships.

As a freshman on the UI women’s basketball team in 2020-21, Clark became the leader in NCAA Division I for three-pointers, total assists, and scoring. She’s taken home the Dawn Staley Award twice, been named second-team All-American, and was named 2022 Big Ten Player of the Year.

O’Connor (47MFA) was 22 years old when she joined the Iowa Writers’ Workshop. Before her death in 1964, O’Connor published two novels, two short-story collections, and over 100 book reviews for two Catholic diocesan newspapers, The Bulletin and The Southern Cross. Posthumously, a collection of her short stories, The Complete Stories, won the 1972 National Book Award for Fiction.

Long (85BBA) played quarterback in a record five bowl games and went on to play professionally for the Detroit Lions and the Los Angeles Rams. In Fry’s words, Chuck Long was “destined for greatness.”

Known best for his role as Willy Wonka in Willy Wonka & the Chocolate Factory, Wilder (55BA) had an illustrious career in film, comedy, and writing after graduating with a degree in theatre arts from Iowa.

Before playing in the NFL for the Indianapolis Colts, Tampa Bay Buccaneers, and the Baltimore Ravens, Clark (07BA) helped Iowa see their first undefeated conference season in 80 years.

Dwight (99BS) made a mark on Iowa football with conference records for punt return yardage and punts returned for touchdowns. After graduating from Iowa, Dwight was drafted by the Atlanta Falcons, famously running a 94-yard touchdown return for the team after the Super Bowl XXXIII kickoff against the Denver Broncos.

Honorable Mention: Me, Myself, and I

We love the honesty.