By Jim Snyder
6 minute read
The poker player, energy trader, and art collector wants you to have some fun before you die. 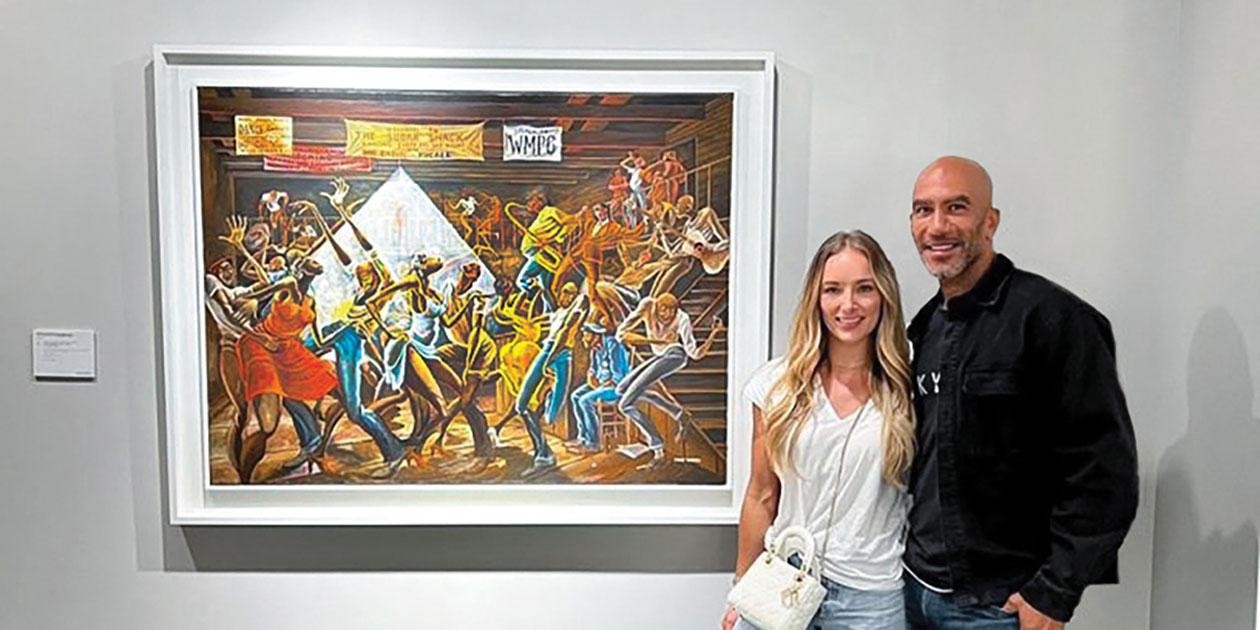 Each higher bid for the Ernie Barnes painting The Sugar Shack gave University of Iowa grad Bill Perkins another opportunity to put his free spending philosophy, which he lays out in the book Die With Zero: Getting All You Can From Your Money and Your Life, into practice.

Perkins (98BSE), a former Hawkeye football player who later struck it rich as a natural gas trader and hedge fund manager, became an author to spread the gospel that experiences and relationships are as worthy of your money as your 401(k). 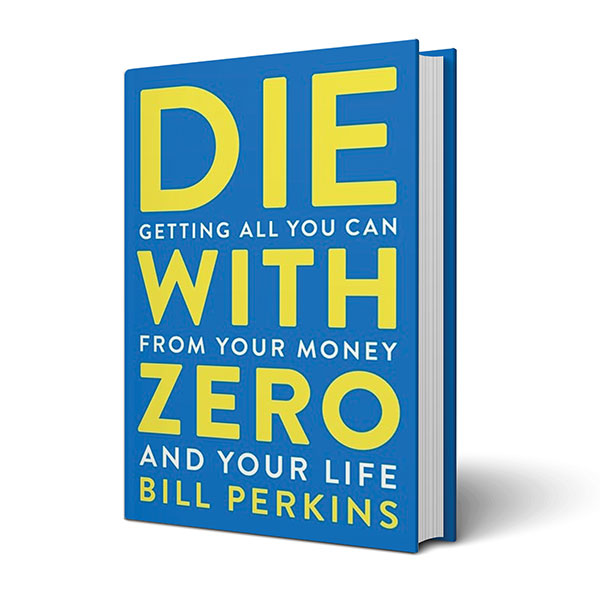 Too often, he believes, Americans hoard their financial resources until it’s too late to enjoy the activities or things they were saving for in the first place. If money is a means to an end, it doesn’t make sense to be sitting on a pile of it at THE end.

By the May 12 auction at Christie’s Auction House in New York, Perkins had acquired quite a bit of it. While he’s cagey when asked exactly how much, it is enough to treat family and friends to extravagant vacations, pay into high-stakes poker games, and acquire a growing art collection of early 20th century African American artists he felt were undervalued artistically and, lucky for him, monetarily.

The Sugar Shack, it turned out, was different. The 1976 painting was the cover art on Marvin Gaye’s album I Want You and in the closing credits of the 1970s sitcom Good Times. It depicts an elastic and ecstatic group of dancers and musicians in a Durham, North Carolina, music hall jubilantly shaking off the limitations on life in the Jim Crow South.

Christie’s originally expected the sale to net between $150,000 to $200,000. As the price quickly rose multiples of that, the 22 bidders at the start dwindled to just two: Perkins and an art adviser from Los Angeles, who stilled his hand after Perkins finally called out, “$13 million!” After additional fees, the total price came to $15.3 million.

“There’s nothing more American than the early African American painters. The things they painted about, the narrative, what was going on at that time, is distinctly an American experience,” says Perkins, who loaned The Sugar Shack to Houston’s Museum of Fine Arts through the end of the year. “They are the original American masters.”

His giddiness at having acquired The Sugar Shack hadn’t abated at all in a recent interview, despite the unexpected price jump. Perkins says he takes inspiration from the artist’s guts and perseverance: “Who’s crazy enough to be an artist, born in the ’30s, who’s Black?”

Of course, most people can’t afford to spend $1,500 on a painting, let alone $15 million. But if you are facing a choice between saving or spending, Perkins wants to put in a word for the spending side. He believes in “consumption smoothing,” leveling out expenditures to squeeze as much out of life as possible. 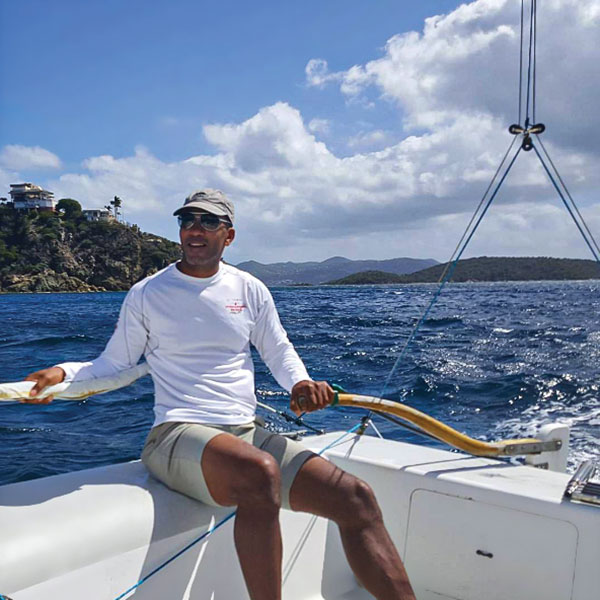 His friends call him an honorary billionaire, meaning he isn’t one but lives like he is. Perkins’ spending also includes big donations to charities, in particular groups that support adoption because he believes the roots of many of society’s problems stem from children who lack the stable home life his parents provided him. Charities, or children, shouldn’t have to wait until the end of your life to benefit from your largesse, he believes.

Perkins grew up in a comfortable home in Jersey City, New Jersey, the son of a lawyer and schoolteacher. Just across the Hudson River a glitzier environment beckoned: Manhattan in the ’80s, when yuppies in Armani suits seemed the center of the zeitgeist. His path to Wall Street took a detour through Iowa City because Perkins’ dad, Bill Perkins Jr. (65BA), played football at Iowa, including on the 1959 team that won the Rose Bowl. They would attend reunions together in Iowa City.

“I’ve been a fan of the Hawkeyes since I was a kid,” says the younger Perkins. “So, I kind of just wound up there through, I guess, fate.” A defensive back in the late '80s, Perkins says he “played the bench.” He spent time as a walk-on trying to manage the considerable demands of football and electrical engineering before he decided to give his long-suffering GPA a break his senior year.

Perkins said he never seriously considered engineering as a career, believing that life at a company like General Electric or IBM would be too bureaucratic for him. But he credits his education with enhancing an innate confidence that he could find solutions to complex problems.

“I love the puzzle of the markets every day,” he says. “Love attacking the puzzle. Love the competition aspect of it. Love the myself-versus-the-market. Yes, the goal is the money, but I really enjoy playing the game.”

After working for a few years in New York, Perkins moved to Houston to take over an options trading desk at an energy company, becoming a millionaire before 30. Now that he had money, he discovered he didn’t quite know what to do with it. 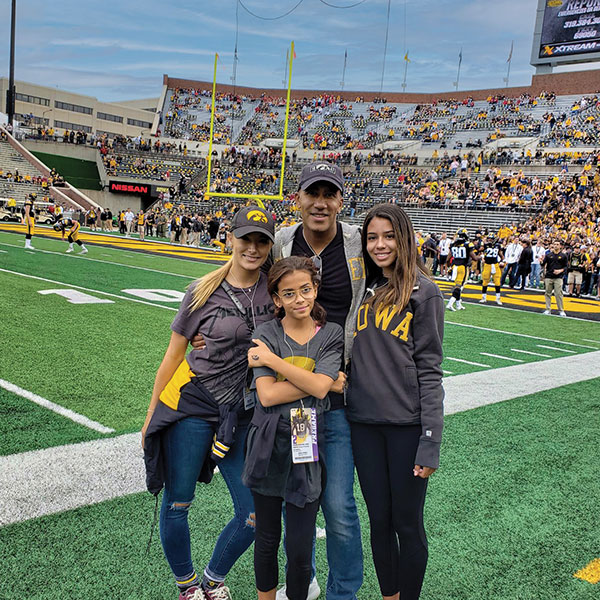 Of the two, Perkins’ life has leaned closer to the rap side of the ledger, judging from his Instagram account.

There he is with a flamethrower, driving a golf ball into the Caribbean, sitting knee to knee with Richard Branson on a couch on the beach. A Wall Street Journal 2017 profile said Perkins’ Insta account was famous for photos of bikini-clad women enjoying life on his yacht.

These days the women with him are Lara Sebastian, an actress and dancer whom he married in July, and his daughters, now aged 15 and 18, to whom he dedicated his book. All four attended a game at Kinnick Stadium in 2019—clad in Hawkeye gear—to support Perkins’ former teammate Michael Titley (09BLS), an honorary captain that day.

Perkins says experiences accumulate over time, like a dividend, leading to a rich life in a metaphorical sense. The biggest trick is figuring out exactly what you want, which is much of what Die With Zero is about.

“Going through life like it lasts forever is suboptimal,” says Perkins, who uses an app that estimates his own end date to be between 2053 and 2056. “It’s really about living intentionally, in each phase of our lives.”

There’s a time to tour Europe by staying in squalid youth hostels, a time for canoeing with your kids, and for him, a time to almost single-handedly reset an art market that, because of the vestiges of racism, has undervalued artists like Ernie Barnes.