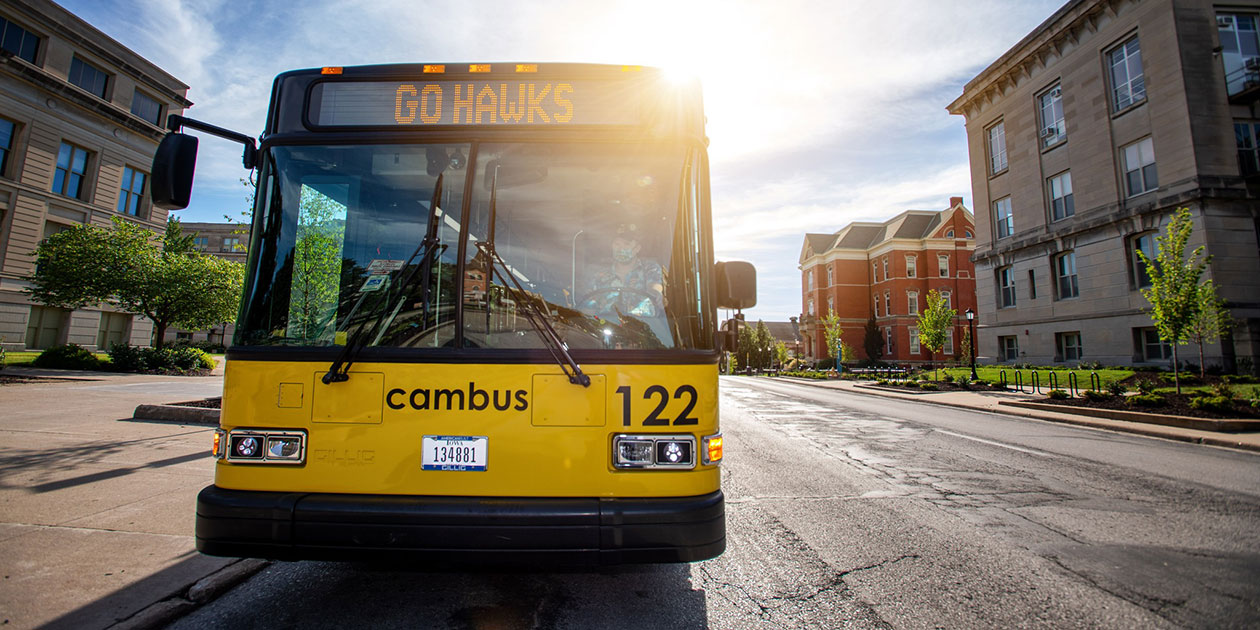 More than 50 years ago this fall, Doug Couto (72BBA) and his friends rented a school bus to make six daily trips from the University of Iowa’s westside residence halls to main campus to help fellow students get around. That was the dawn of CAMBUS, which the UI officially adopted in 1972. It was one of the first university-operated busing systems in the nation.

In honor of CAMBUS’s anniversary and upcoming homecoming reunion, here are a few memorable moments from its long ride.

“Freshman year I lived in Quadrangle, so it was always, ‘red to bed’ and ‘blue to school.’”
Jillian Wojcik Trim (05BA)

“I rode the CAMBUS for a few years before I retired from the VA in 2016. One day, the bus was packed, so I had to stand, which was fine with me, but a very polite young man offered me his seat! I knew then that I was officially old!”
Pamella Hale Kissinger 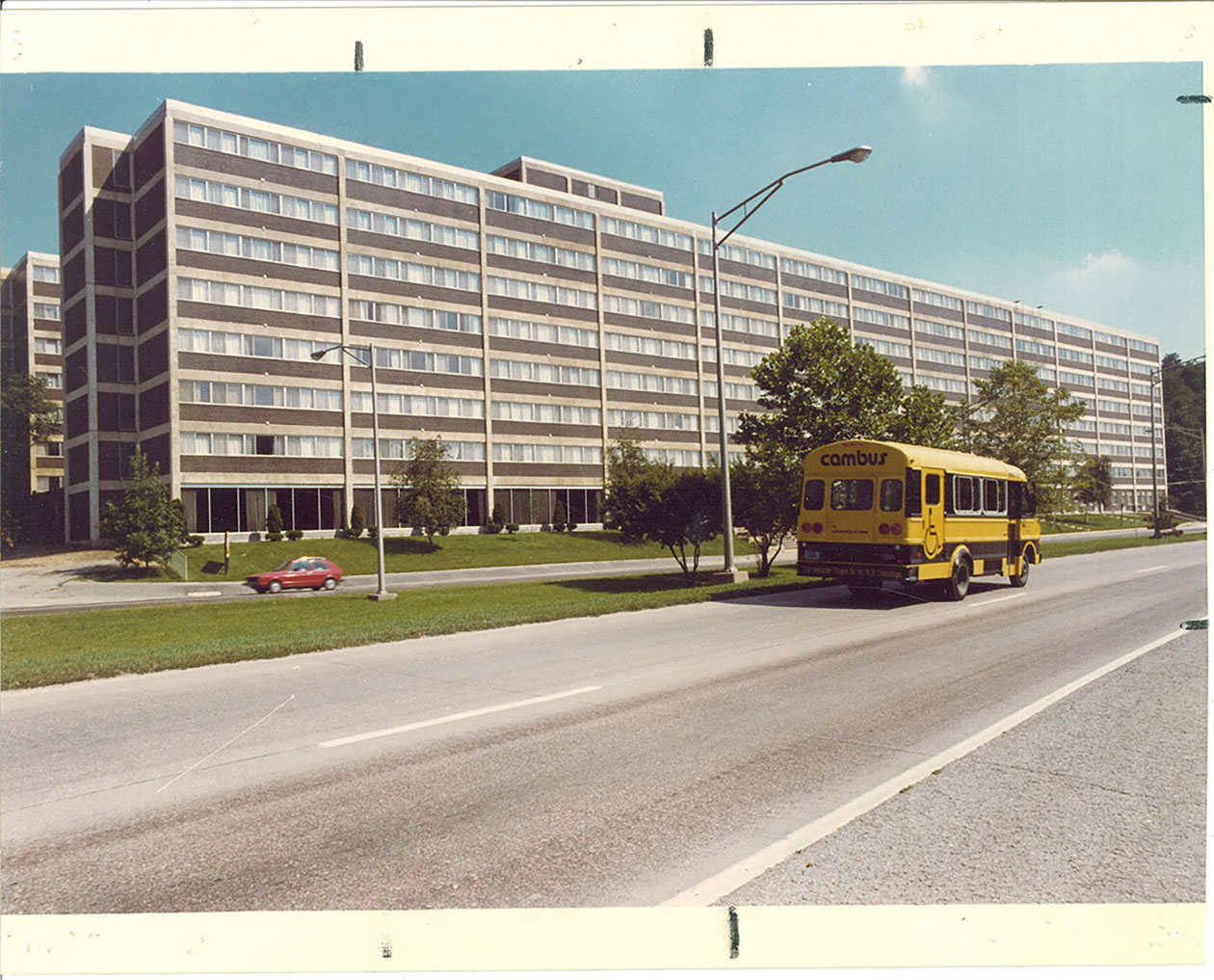 “I waited a little too long to leave my on-campus job after I went into labor with my second child. My normal commute was to ride the CAMBUS to the stop three blocks from my home, so I headed home to get my husband and head to the hospital. The bus was crowded, so I stood in the aisle, both hands on the overhead grip bar, breathing through my contractions. The walk was a little more harrowing, but I made it home to say goodbye to my toddler and get to the hospital with 50 minutes to spare.”
Amanda Whitmer Chrystal (00BBA, 01MAc)

“I remember one winter when the snow and ice was bad, and we couldn’t make it up Jefferson Street from the bottom of the hill. We all went to the back of the bus to gain traction, and, sure enough, made it up.”
Erin Anderson Roderick (98BSN)

“Most fun I ever had making money. I loved steam cleaning the engines down in the pit in the old garage.”
Drew Beck 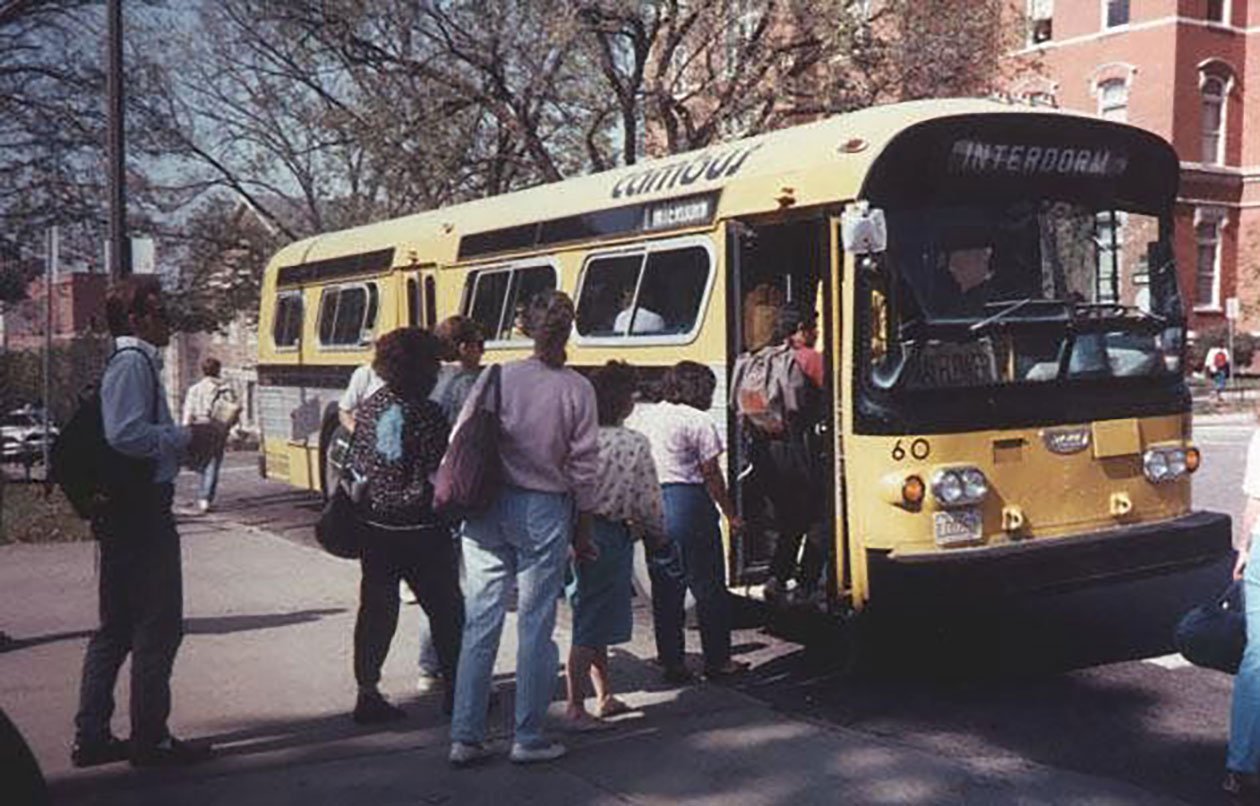 PHOTO: University of Iowa Students board a Cambus in 1977.

“If you watch one of my favorite Christmas movies—Miracle on 34th Street, the original one—they said the post office was [the most efficient organization on the planet]. That’s hogwash. The CAMBUS is. Kirk Ferentz said so. By God, I believe in Kirk Ferentz.”
Wrestling coach Tom Brands (92BS) at a January 2020 press conference, discussing CAMBUS’s role in transporting fans to Iowa dual meets

Homecoming Reunion
Oct. 28-29
CAMBUS alumni and the public are invited to a 50-year celebration and reunion at the CAMBUS Maintenance Facility, as well as a pregame tailgate.

Homecoming Reunion
Oct. 28-29
CAMBUS alumni and the public are invited to a 50-year celebration and reunion at the CAMBUS Maintenance Facility, as well as a pregame tailgate.

Join our email list
Get the latest news and information for alumni, fans, and friends of the University of Iowa.
Sign up now
Related Articles
Your Guide to University of Iowa Homecoming
Return to Iowa City this October to celebrate the people, places, and traditions that make the university great.
Mentee Becomes Mentor for First Gen Hawks
The donor-funded program helps first-generation college students learn and thrive at Iowa.
University of Iowa Course Examines Refugee and Immigrant Experience
Students help raise awareness of issues faced by displaced Afghans and other newcomers to the U.S.
Ready For a Boom on One Day for Iowa
The Hawkeye Marching Band was one of two areas to exceed 180 gifts during the University of Iowa's 24-hour online giving day in 2021. Its members are ready to inspire more participation during this spring's event.