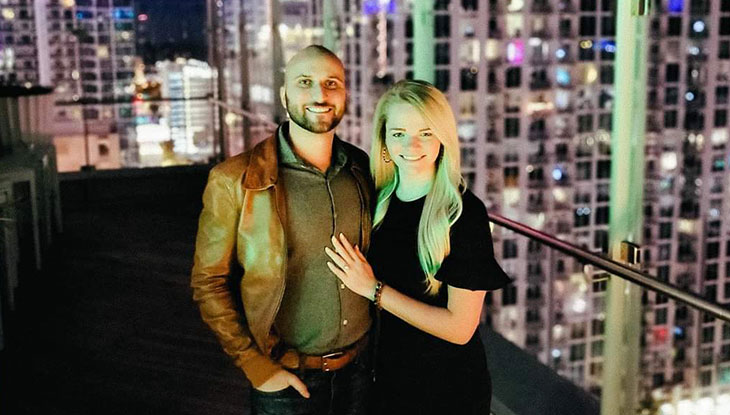 PHOTO COURTESY JAMES HACK Charlotte Iowa Club President James Hack and his fiancée, Kendall Boone, who got engaged at a Hawkeye football game watch, plan to be married on April 29, 2023, in Charlotte.

James Hack (17BBA), president of the Charlotte Iowa Club in North Carolina, proposed to his fiancée at a Hawkeye football game watch this past November before a crowd of cheering Iowa fans.

Hack joined the Iowa Club almost immediately upon moving to Charlotte in 2018. He was used to being involved in the University of Iowa community throughout college and saw the Iowa Club as a way to stay connected.

“[Joining] seemed like the obvious thing to do,” says Hack, who became president of the chapter in 2021.

Hack and his fiancée, North Carolina native Kendall Boone, initially met through the dating service Bumble, and they regularly attended game watches together. For the proposal, he pretended to draw her name in a raffle to get her up in front of the crowd. Though the couple had previously discussed marriage and even gone ring shopping together, he believes the proposal itself was a surprise.


Find an Iowa Club Near You

Learn more about our Iowa Clubs in 60 cities across the country and around the world. Wear your black and gold proudly as you cheer on the Hawkeyes during game-watch parties at local bars and restaurants, attend networking and cultural events, and raise scholarship funds for Iowa students from your community.