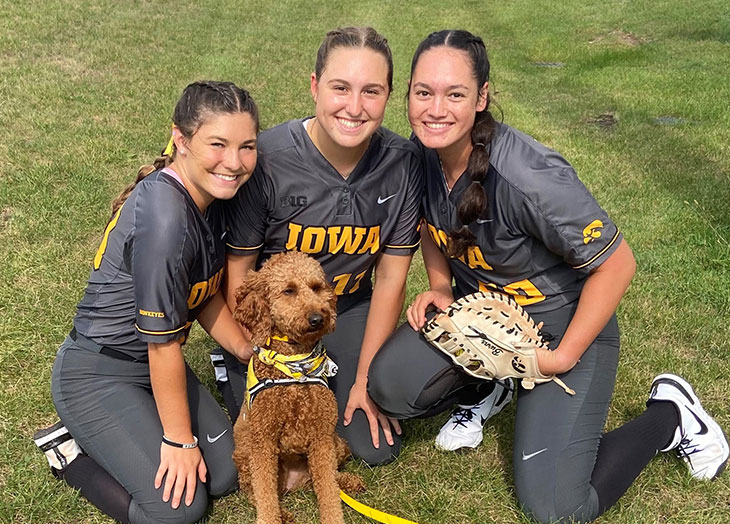 PHOTO: HAWKEYESPORTS.COM Senior Riley Sheehy, freshman Anna Henderson, and junior Kalena Burns play with Mali, the Hawkeye softball team's therapy dog.
In fall 2021, the Hawkeye softball team added a surprising new recruit. She doesn’t pitch, catch, or hit home runs. Instead, the rookie’s strengths include playing fetch and delivering lots of cuddles. She’s a petite goldendoodle named Mali, and as the first full-time therapy dog at the University of Iowa and in the Big Ten, she may be considered an adorable step forward for mental health support in college sports.

Originally, Erin Doud-Johnson (01BA), Mali’s owner and a volunteer assistant coach for the team, suggested that a therapy dog could help student-athletes maintain their mental health while dealing with the COVID-19-shortened 2020 season. Since joining the team, however, Mali has helped with a variety of other stresses too, including hitting slumps, school stress, and homesickness.

According to the team, she even senses what each student-athlete needs each day, whether that’s playtime at practice, support during a big game, or just some distance. “She has a personal relationship with every team member,” says Maggie Vasa, a Hawkeye infielder.

Finding Mali wasn’t a simple process. Doud-Johnson knew it was important to get a dog with the right temperament, so in April 2020 she adopted Mali from the Decorah, Iowa-based Kimberlee’s Kennels, a breeder known for dogs suited to therapy work.

Then, Mali and Doud-Johnson worked with a trainer for about a year and a half over Zoom to learn the skills the dog would need to support the team, such as staying calm and not getting distracted by hectic environments. The intensive process included nursing home visits to test her skills and a final certification examination by the Alliance of Therapy Dogs.

Mali’s work doesn’t end with the softball team. Doud-Johnson and Mali plan to visit UI Stead Family Children’s Hospital and share Meet Mali the Therapy Dog, the first book in a new series featuring the pooch. The rhyming picture book by Cedar Rapids author Mary Griffith Chalupsky tells the story of Mali’s journey to the softball team, and Doud-Johnson hopes children will benefit from Mali’s soothing presence as much as the Hawkeyes.

Doud-Johnson also hopes Mali’s example can serve as a catalyst for more therapy dogs in college sports. “I do think that if you looked at our teams in the past compared to where we are now, we’re much healthier,” she says. “For the student athletes, [she’s] a peace of mind.” 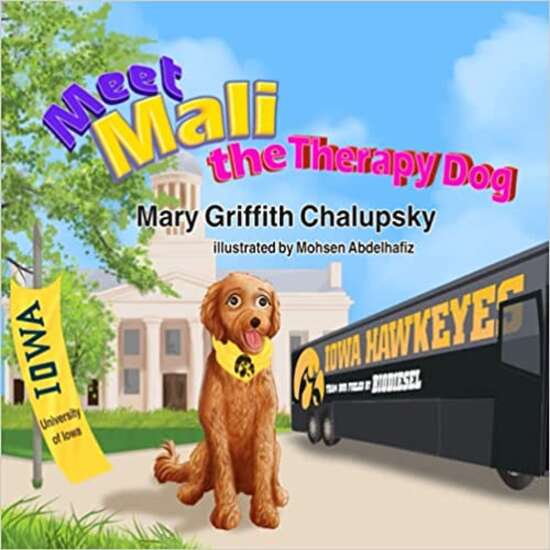 Meet Mali the Therapy Dog
by Mary Griffith Chalupsky, Corridor Publishing, 32 pp.
Available on Amazon
Join our email list
Get the latest news and information for alumni, fans, and friends of the University of Iowa.
Sign up now
Related Articles
A Golden Anniversary for Hawkeye Women's Athletics
From national titles to the Final Four, Iowa celebrates 50 years of sports equity and excellence.
Former Hawkeye Football Player Bill Perkins is All In on Life
The poker player, energy trader, and art collector wants you to have some fun before you die.
Know Your Stoops
Meet the famous Hawkeye football family, including Mark Stoops, the Kentucky coach who will soon face his former team in the Vrbo Citrus Bowl.
How Christine Grant Changed the Game
On the 50th anniversary of Title IX, the University of Iowa celebrates the legacy of the athletics administrator who helped level the playing field nationally and sparked a women's sports revolution.