For two weeks last fall, Inga Popovaite felt like a character in a science fiction novel set on Mars. She put on a mock spacesuit with a helmet to explore the red terrain on the Mars Desert Research Station—located in the Utah desert.

“The desert had all these beautiful colors. It looks completely out of this world,” says Popovaite (16MA, 21PhD), a recent University of Iowa sociology alumna who also holds a graduate certificate in informatics. “It was an adventure of a lifetime. It was interesting to live in science fiction for a bit—to live on Mars, while being on Earth.” 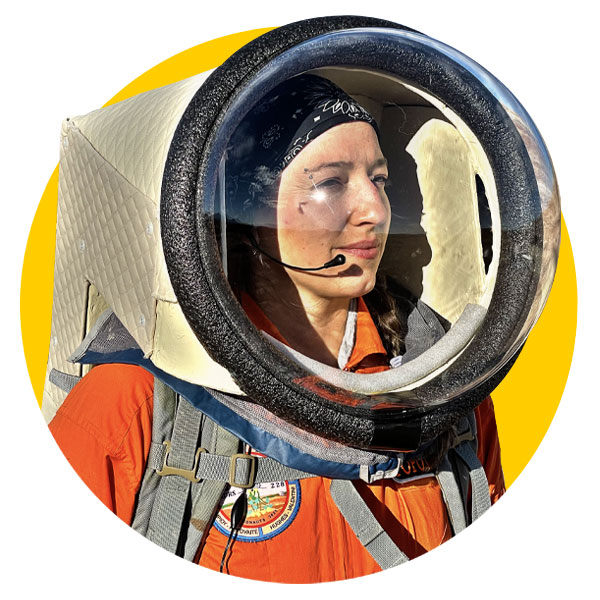 PHOTO COURTESY INGA POPOVAITE Popovaite wears her helmet and spacesuit on a quiet walk through the desert.

Popovaite, a sociologist from Lithuania, traveled to “Mars” to collect data for her dissertation while a graduate student in the UI Department of Sociology and Criminology. Popovaite conducted a study in a space analog environment, which approximates a long-term space flight, to determine how gender influences crew dynamics while in isolation and confinement. Her fellow crew members included a recent PhD graduate from Iowa State University who studied bioinformatics and served as mission commander, a retired American engineer who served as executive officer and crew engineer, and a master’s student from Malaysia who studies mechanical engineering and served as health and safety officer.

Popovaite applied to the nonprofit Mars Society, which owns and operates the Mars Desert Research Station, to become a crew member. The Mars Desert Research Station began operations in 2001 as a fully volunteer enterprise and has had 218 crews conduct research on the red planet. Popovaite’s data was used for the first chapter of her dissertation, which she successfully defended in fall 2021.

The Mars Desert Research Station is a prototype of a potential Mars habitat, and Popovaite and her fellow crew members stayed there to simulate human operations in the harsh environment. The habitat is a key component in current human Mars mission planning, and the Mars Society actively supports NASA and other space agencies in their ongoing exploration of Mars.

During her two-week mission, Popovaite and her three crewmates lived in a two-story cylinder, 26 feet in diameter. The lower deck houses spacesuit simulators, a shower room, toilet room, and a rear airlock leading to tunnels that provide access to other campus structures. The upper deck features the living quarters, with a common work/living area, a kitchen, and seven bedrooms with bunks.

There are two observatories on the campus. The Robotic Observatory features two telescopes that have several cameras for astronomical imaging, while the Musk Observatory is a solar observatory used by crews.

The Science Dome contains the solar system’s control center and is a microbiological and geological laboratory. The Repair and Maintenance Module houses an ATV/rover and is used for engineering research. All the structures except for the Robotic Observatory are connected via aboveground tunnels to allow participants to use the buildings while remaining in simulation.

While on campus, the crew members followed different protocols that mirrored life on Mars. Popovaite lived in close quarters with her crewmates 24 hours a day and had to conserve water when taking showers and doing dishes. “You couldn’t just go outside whenever you wanted. You were considered dead if you went outside without a spacesuit and your mission failed,” says Popovaite, whose trip was delayed multiple times due to the COVID-19 pandemic. “We were all very committed to the success of this mission.”

The crew’s commitment included eating only dried and shelf-stable food that’s used during space missions, since there aren’t grocery stores on the red planet. While the lack of fresh ingredients was her least favorite thing about the experience, she thoroughly enjoyed putting her full spacesuit on to go on space walks through the desert.

“It’s very eerie when you have a helmet on,” says Popovaite. “It physically bends what you see because it’s a plastic bubble. You don’t hear anything other than your radio. You know you’re on Earth, but it’s another layer of simulation, and you can feel it.”

Every day as part of the simulation, the crew communicated with members of mission control just as it would on a space mission, submitting a daily report about science, engineering, journalism, and other topics. Documentation was a big part of the mission.

In her reports, Popovaite discussed how gender contributes to an individual’s influence within a group. She argues that gender inequality contributes to gendered experience in isolated crews. Previous research on work groups shows that social inequality and cultural stereotypes are imported, reproduced, and reaffirmed in almost every interaction. For example, in work groups, people subconsciously stereotype others and make judgments about others’ abilities based on their gender, race, ethnicity, and other observable status characteristics.

Following her trip, Popovaite published a study in the Journal of Human Performance in Extreme Environments with Alison Bianchi, a UI associate professor of sociology, based on data from 30 different Mars Desert Research Station missions. The study revealed women were 6% less likely to participate in simulated extravehicular activities than men, controlling for crew role, education, and other factors. It showed that gender influenced group decisions in the simulation, which Popovaite and Bianchi say highlights the need for more studies on interactional inequalities in preparation for future human missions to Mars.

“In my crew, I observed a culture change that’s happening with the new generation of millennials and younger who are questioning the status quo of gender in STEM environments and in space specifically,” Popovaite says. “Basically, every day after breakfast, our discussion would just veer toward inequalities regarding gender, race, everything in between. We discussed what can be done about it. It’s interesting to see how gender and status is being talked about not just in diversity, equity, and inclusion presentations, but in the real world, too.”

Although many may think of space research as being primarily conducted by engineers and biologists, Popovaite believes sociologists can play a key role in studying the potential inhabitation of other planets by humans.

“I do believe the strongest research is interdisciplinary,” she says. “Space research is very STEM focused, which is great, because we need to figure out how to get there from an engineering and technical perspective. However, robots and tools are just one part of the equation.

“In the end, if we want to send humans to Mars and understand how humans interact and behave and what obstacles they would face, we need people from a social science background.”

After experiencing the Mars simulation, Popovaite believes sending humans to another planet is not an impossible task.

“It’s possible as long you have the technical parameters figured out and if people are ready to do that and live with each other for up to three years,” Popovaite says.

Would she jump at the chance to set foot on Mars?

“If people go there, a one-way journey would last nine months, not including staying on Mars,” says Popovaite, who wants to land a position with the European Space Agency.

“Will the private sector take us? I don’t know. Will NASA? They were debating about going in the 2030s. I would go, but not on the first flight. I would go if I knew there was a safe path of return.”

For now, the simulation has given Popovaite a fresh perspective on what life on another planet could be like—and how those lessons can offer new insights about our interactions on Earth.

Join our email list
Get the latest news and information for alumni, fans, and friends of the University of Iowa.
Sign up now
WATCH: University of Iowa graduate Inga Popovaite completed her dissertation in sociology at the Mars Desert Research Station in Utah. While there, she studied human cohabitation during a simulated life on Mars.

Visit the UI Graduate College online for more stories like this one.

WATCH: University of Iowa graduate Inga Popovaite completed her dissertation in sociology at the Mars Desert Research Station in Utah. While there, she studied human cohabitation during a simulated life on Mars.

Visit the UI Graduate College online for more stories like this one.

Join our email list
Get the latest news and information for alumni, fans, and friends of the University of Iowa.
Sign up now
Related Articles
At the UI Museum of Natural History, a Paradise Not Yet Lost
Iowa experts race to save one of the world’s few remaining cycloramas, which depicts the endangered bird haven Laysan Island in its heyday.
Iowa Alumna and Microsoft Innovator Offers a Window to Tomorrow
Kelsey Huebner discusses the future of the internet, metaverse, and AI.
Iowa Pharmacy Garden Explores Roots of Medicine
Visitors can use smartphones to learn about the healing properties of plants.
AI @ IA: Five Ways Artificial Intelligence Powers Discovery at Iowa
From forecasting floods to fighting cancer, Iowa researchers are deploying AI to tackle some of society's biggest issues.