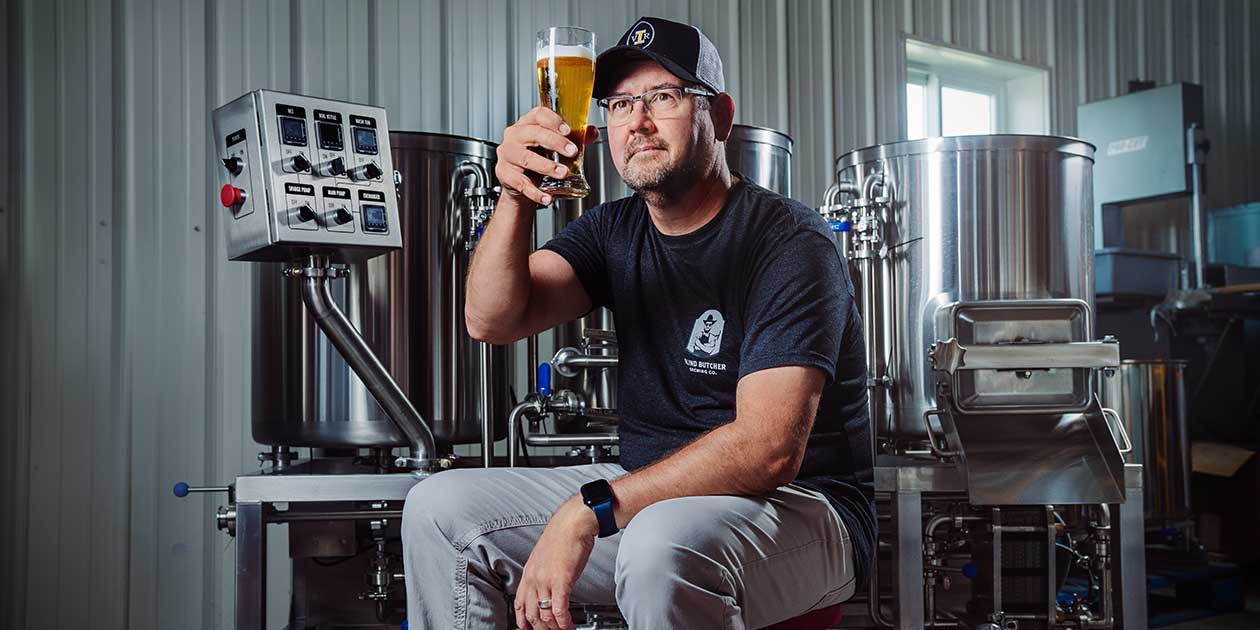 Rob Hage noticed his vision drastically waning while driving. He could no longer see the cyclist riding on the shoulder of the road or the deer ready to dart across. He'd triple-check an intersection, yet pull out in front of an oncoming car.

Hage stopped driving long before he was legally restricted from it. In August 2017, he and his wife made the five-and-a-half-hour trek across the state to the University of Iowa Department of Ophthalmology and Visual Sciences for a checkup where Institute for Vision Research director and ophthalmologist Ed Stone (89R, 90F, 92F) confirmed Hage's fear: he was legally blind and barred from driving. "That probably had the most profound effect on our lives," says Hage. "Just losing that capability of going wherever I needed to go."

In December 2020, Hage received new hope for regaining his vision during a Chat From the Old Cap webinar featuring Stone, who discussed the IVR's mission and encouraging advances in vision research. The webinar inspired Hage to raise money and awareness to support the IVR through a hobby he started early in the pandemic: brewing beer. With the help of many family members and friends, Hage opened Blind Butcher Brewing this past September on his farm north of Inwood, Iowa, where a portion of the proceeds will go to support the IVR. 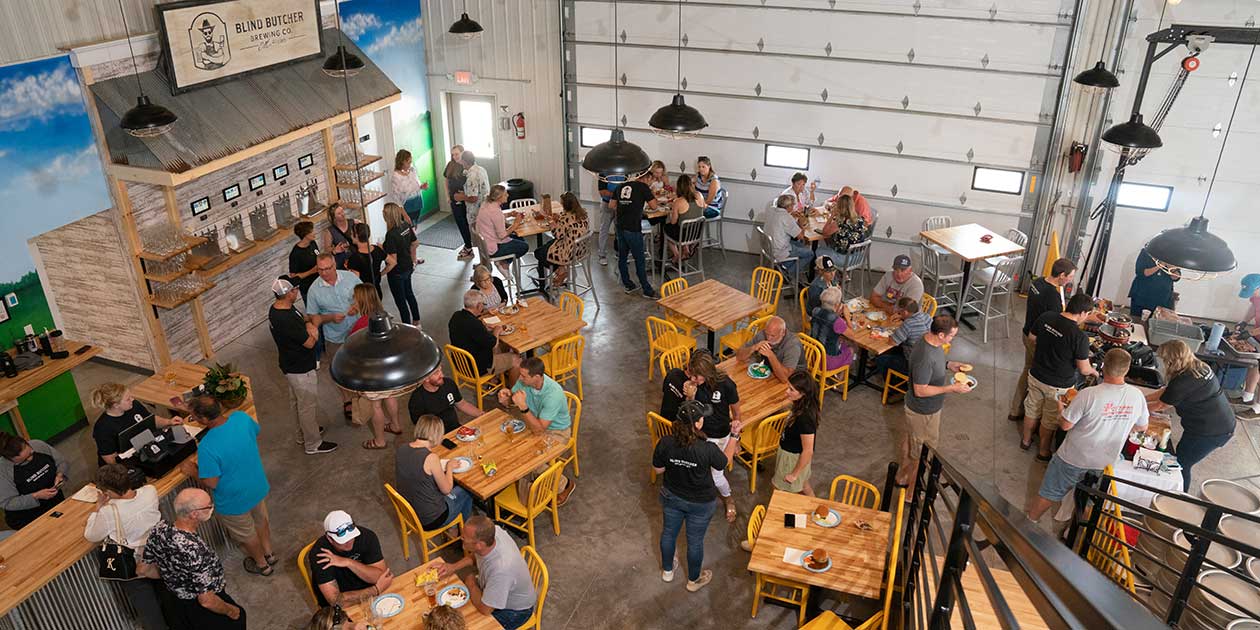 PHOTO: Laura Bahnson-Kramer Blind Butcher Brewing is housed inside a remodeled machine shed on the Hages' farm north of Inwood, Iowa. The brewery has a self-serve tap system, offering a variety of beers from across the state.

In front of the brewery stands an oak tree that serves as a daily reminder of the journey Hage started 12 years ago. Hage planted the tree after he was diagnosed by Stone with retinitis pigmentosa, a rare genetic disorder that involves a breakdown and loss of cells in the retina. Hage likens the condition to a form of tunnel vision that's slowly diminishing his sight. "That vision loss is narrowing in on my central vision," says Hage. "The tunnel is closing."

Stone's webinar gave Hage hope that UI research could help widen his vision again one day. A promising vision-restoring treatment that uses patient-derived stem cell therapy is well positioned to undergo clinical trials at the IVR in the coming years. The therapy uses the patient's DNA to grow new healthy retina cells, which are inserted into the back of the patient's eye to replace the damaged cells. Stone believes the treatment will be readily available in less than a decade, though the additional challenge is making it widely affordable. He says the IVR is poised to improve accessibility to the treatment as a nonprofit that can manufacture it in-house. As a world-renowned institute that focuses on finding treatments for all forms of genetic eye diseases, the IVR operates with a "leave no one behind" mentality—and meets a societal need that wouldn't otherwise be met by commercial, for-profit organizations. 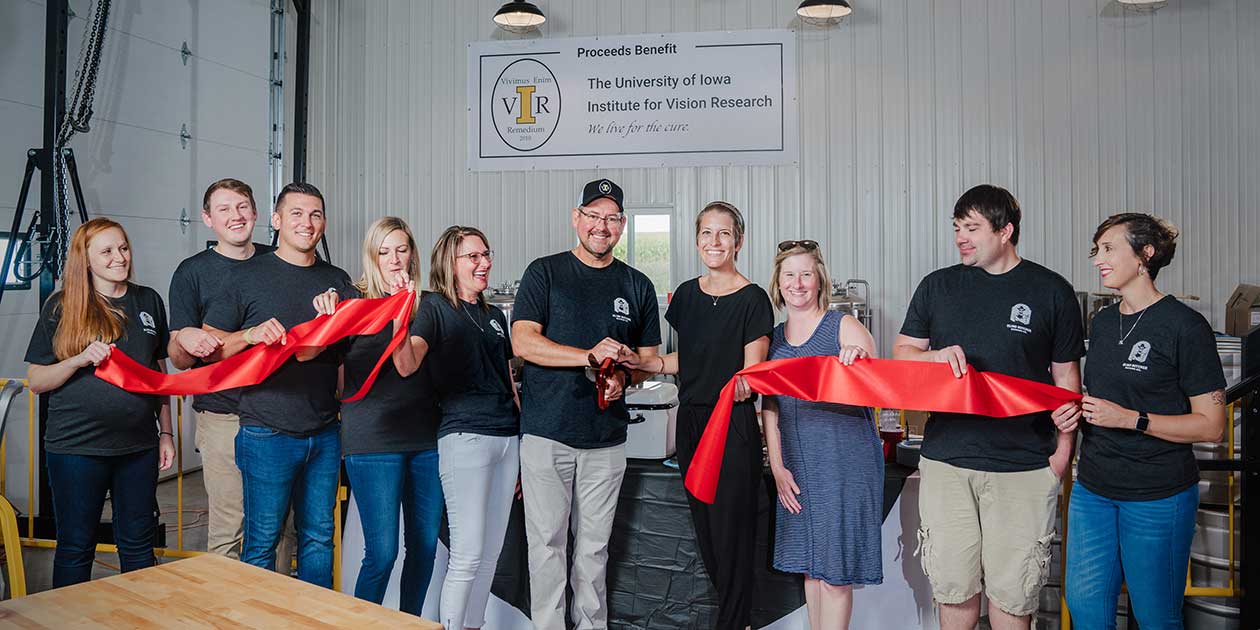 Hage's brewery and other giving can also support bringing the treatment to market and assist those who need help paying for it. "Rob's efforts to raise support for, and awareness of, the IVR is truly inspiring," says Stone. "To see a patient do so much to help others with inherited retinal diseases further energizes me and my colleagues to continue working to make these treatments available for all who need them."

Through collaborations with other breweries, Blind Butcher Brewing plans to can and label four of its own flagship beers by 2022. Profits from outside sales will go to the IVR and each can will include a QR code that people can use to donate online.

Reflecting on the brewery's early success, Hage remains optimistic that within 5 to 10 years he'll once again see many of the things he's been missing. "There's always hope but realistic hope is when you come to understand how this is going to happen," says Hage. "I heard enough from that seminar to walk away saying, 'They've got this. It's now just a matter of time and funding.'"

Watch the Chat From the Old Cap webinar featuring Ed Stone.
Join our email list
Get the latest news and information for alumni, fans, and friends of the University of Iowa.
Sign up now

Research by the Numbers

Since 1987, the UI Institute for Vision Research has studied genetic eye diseases to find treatments to cure and prevent blindness. Founded by ophthalmologist Ed Stone (89R, 90F, 92F) and his colleagues, the IVR has become an internationally renowned institute that is developing gene- and stem-cell based therapies to help preserve and restore vision for people around the world. Here is its impact by the numbers.

Research by the Numbers

Since 1987, the UI Institute for Vision Research has studied genetic eye diseases to find treatments to cure and prevent blindness. Founded by ophthalmologist Ed Stone (89R, 90F, 92F) and his colleagues, the IVR has become an internationally renowned institute that is developing gene- and stem-cell based therapies to help preserve and restore vision for people around the world. Here is its impact by the numbers.