By Leah Klevar
Retired UI journalism professor Judy Polumbaum pays homage to her father's work on the frontlines of history. 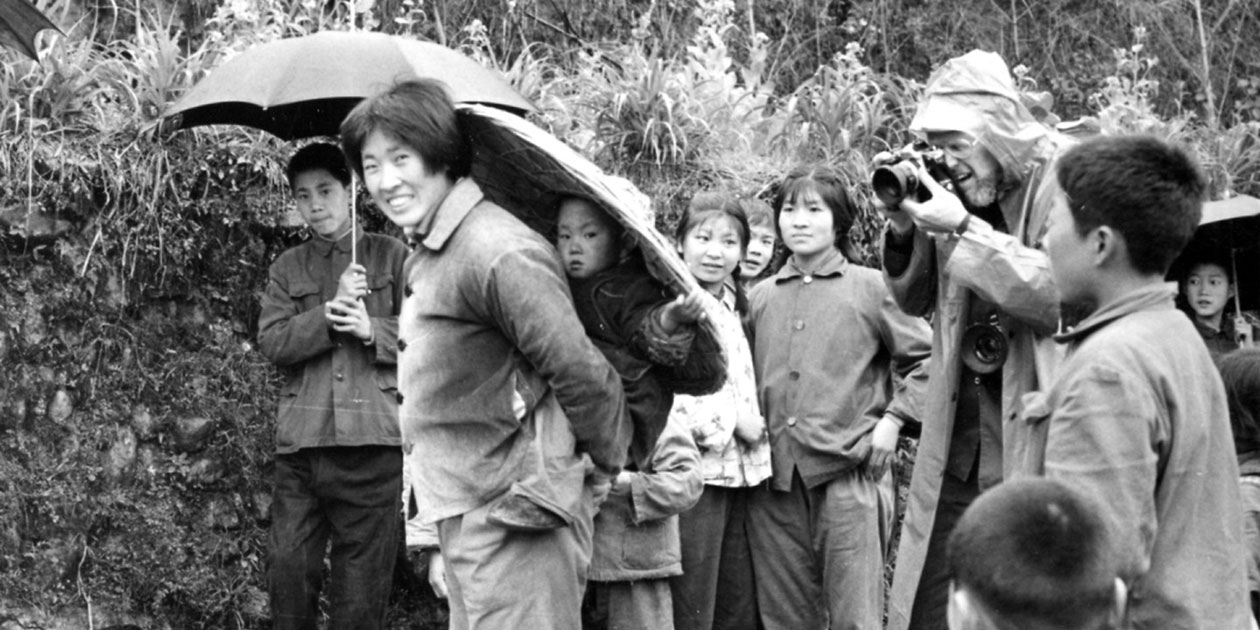 PHOTOS:TED POLUMBAUM COLLECTION Judy's parents visited her while she taught in China in spring 1981; here, Ted takes pictures in a remote village in Anhui Province.

From defying congressional inquisitors during McCarthyism to photographing Freedom Summer volunteers, freelance photojournalist Ted Polumbaum had a front-row seat to social change. He captured moments, large and small, across the globe and documented major cultural movements in the second half of the 20th century.

Now his daughter Judy Polumbaum, a University of Iowa professor emerita of journalism and mass communication, is sharing his remarkable story in her new book All Available Light: The Life and Legacy of Photographer Ted Polumbaum.

It chronicles Ted Polumbaum's work throughout more than four decades, during which he photographed both newsmakers and ordinary folks—and captured historic events and everyday life with beauty and dignity. He completed more than 400 assignments for LIFE magazine—with subjects ranging from politics, science, sports, and religion to medicine, natural disasters, and the arts—and hundreds of others for publications that included Time, Sports Illustrated, and The New York Times.

Judy Polumbaum hopes her father's legacy will enlighten new generations: "Ted's story, and the power of his pictures, can illuminate the enduring influence of the past upon the present and, I hope, further inspire those working for a better future." Winter cornfield in the Amanas, 1980s; Ted was in the area photographing Amana factories for a Raytheon Corp. annual report.
[©Ted Polumbaum/Newseum collection] Ted stands in Boston snow at the start of his freelance photo career. The famed Cambodian temple complex, Angkor Wat, in 1961, before its destruction under U.S. bombing, and long before it became a tourist attraction; Time Inc. sent Ted to Southeast Asia to capture images for a Time Life Books series on regions of the world.
[©Ted Polumbaum/Newseum collection] Listen to Judy Polumbaum talk about her new book on Iowa Public Radio.

Join our email list
Get the latest news and information for alumni, fans, and friends of the University of Iowa.
Sign up now
Related Articles
Xochitl Gonzalez on Hulu Pilot, Release of Her Debut Novel, Olga Dies Dreaming
The recent Iowa Writers' Workshop graduate wrapped up an eight-week shoot of a screen adaptation of her novel. The book will be released in early 2022.
Iowa Artist Honors Her Hometown, Grant Wood in Public Mural
An Iowa art alumna creates a mural for Eldon that spotlights the town’s unique connection to the famous painting American Gothic.
Iowa Graduate Unearths New Details in John Wayne Gacy Case
Tracy Ullman uses her communications studies degree in her career as a documentarian, including as executive producer of the NBC docuseries John Wayne Gacy: Devil in Disguise.
T.C. Boyle's Latest Book Explores Interspecies Communication
The Iowa Writers' Workshop graduate examines what it means to be human in Talk to Me.
Advertisement