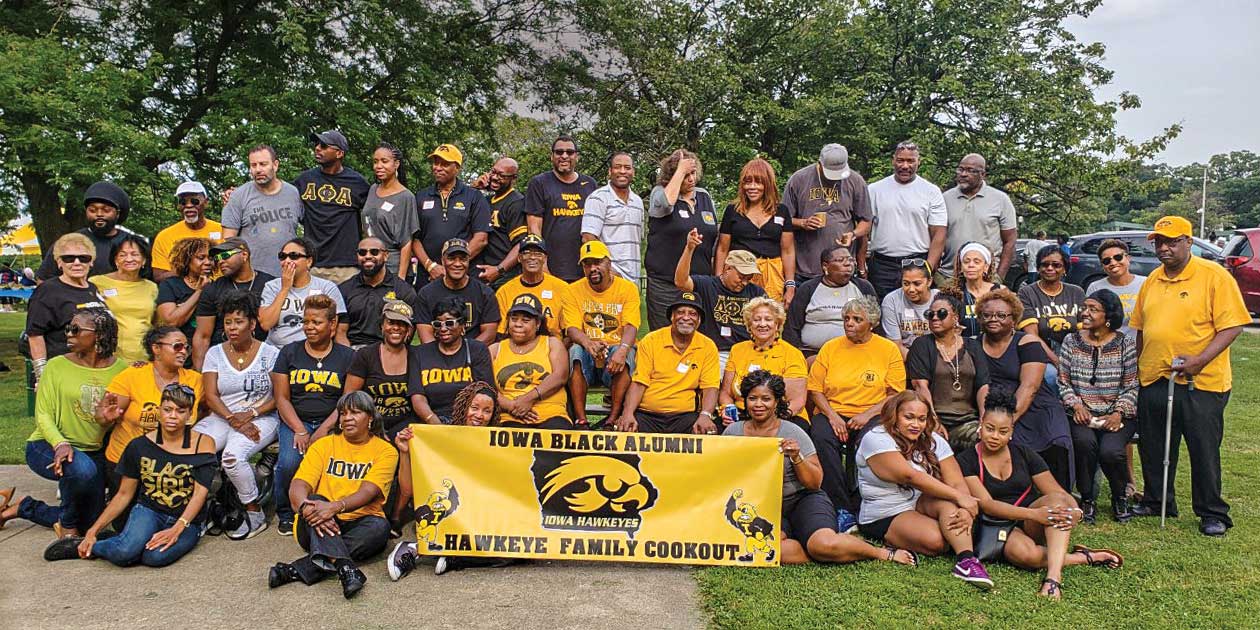 Orville Townsend (67BS, 72MA) came to Iowa in 1962 on a football scholarship, participated on the fencing team, and quickly became friends with other Black students out of necessity. "We were very close-knit because it wasn't safe to go out alone," recalls Townsend. "We needed each other."

Townsend and his wife, Billie (95MA), have expanded that support network over the years as longtime members of the Iowa Black Alumni Association, a group founded in 1963 that has more than 300 members nationwide. The IBAA recognizes the achievements and service of Black students and alumni, fosters career and educational opportunities through networking, and helps improve the lives of Black students and alumni through advocacy and an annual scholarship established in 1993. Open to alumni and friends, the group first gathered at the home of the late McKinley "Deacon" Davis (55BA) and hosts reunions and regional events, including a recruitment picnic in Chicago.

Recently, the Townsends communicated with UI President Bruce Harreld and other UI administrators about improving campus minority programs, reinstating African American Studies as a department with masters and PhD programs, and providing outlets for Black student-athletes to voice their concerns while on campus.

Billie, a retired UI staff member who has served as the IBAA president since 2016, emphasizes the need for younger members to step in to continue the group's pursuit of racial equity. "It's a constant battle, but someone has to do it," she says. "You can either sit back and watch things happen, or you can step up and make things happen."

Throughout her K–12 education, Melita Pope Mitchell (97BA) had only two white classmates. The Gary, Indiana, native experienced culture shock in fall 1991 when she arrived on a predominantly white campus as a UI first-year student. Challenges ranged from finding hair products to dealing with racial incidents, though Mitchell also found strong camaraderie among fellow Black students. "I searched for community, and community also found me," she says.

Mitchell's connections helped launch the Iowa Black Alumni Network in 2009 for Black UI alumni, students, faculty, staff, and allies. The group, which has more than 1,500 members, is developing a mentorship program and hosts campus reunions and panels with students. "The students' most requested topic often revolves around finding a sense of identity and community at the university," says Mitchell, a veteran educator and interim dean in North Carolina. "Those discussions show me there's a very different sense of community on campus than there was in the 1990s."

Mitchell, a UI Alumni Leadership Council member, also participated in a Zoom session with UI administrators this past fall. Though encouraged by the university's support for underrepresented students, Mitchell believes a more critical lens should be applied to the perpetrators of racist acts and that more candid conversation is needed. "We tend to have good intentions when we talk about diversity, equity, and inclusion, but we also have to be OK with having uncomfortable dialogue," she says. "Until we can push through those dialogues and get to a point where we can be open and honest about experiences and expectations, we won't get to a point where progress can be made."