By Leah Klevar
The world-renowned Iowa Neuroscience Institute seeks answers for the family of a 5-year-old girl with McCune-Albright syndrome. 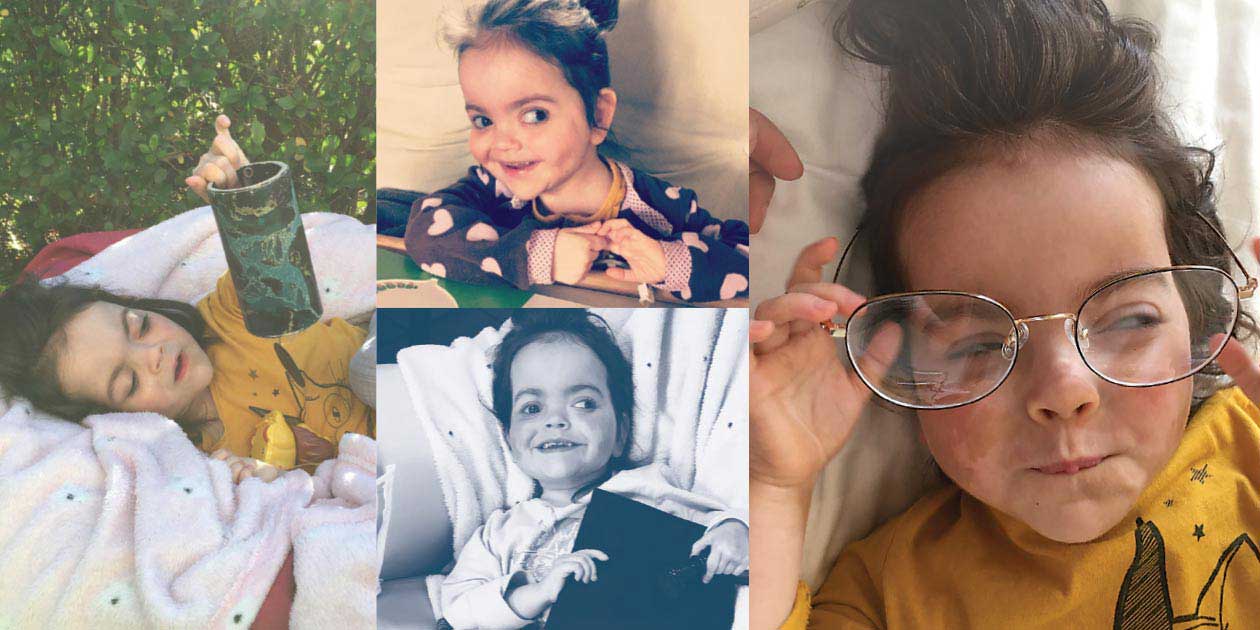 The swelling was the first sign that something was seriously wrong. Then Aurélie "Lili" Lagneau and Damien Gautron learned their newborn daughter, Gaďa, was near death because her body was releasing too much cortisol, a stress hormone that can cause elevated heart rate and blood pressure. Doctors removed her adrenal glands before offering a devastating diagnosis: McCune-Albright syndrome (MAS), a rare genetic disorder affecting the bones, skin, and endocrine system.

Nothing has been the same since. The couple left behind life in Paris for the French countryside, where they have devoted themselves to Gaďa's care. Their daughter can't move her head or speak. She eats through a feeding tube. Light-brown patches dot her skin. She suffers from fibrous dysplasia (FD), a condition in which scar-like tissue develops in place of normal bone, causing deformities or fractures.

The stress was nearly unbearable until Lagneau had an epiphany. "One day I realized that our hard life wouldn't change unless I created the new beginning," she says. So Lagneau, a longtime knitter, launched Supportive Skein in 2018. Her initiative sells donated knitting patterns and wool to support FD/MAS research.

Lagneau also established Association MASFD, a patient organization in France, and connected with the Fibrous Dysplasia Foundation (FDF), another patient-led organization that facilitates FD/MAS research, education, and advocacy. The foundation worked with Lagneau to guide her $60,000 donation to a globally renowned University of Iowa neuroscientist whose lab was more than 4,400 miles from her home.

Ted Abel, the Roy J. Carver Chair in Neuroscience and a member of the National Academy of Medicine, directs the Iowa Neuroscience Institute, which explores the causes of—and preventions, treatments, and cures for—the many diseases affecting the brain and nervous system. He has helped position Iowa as a leading destination for brain and nervoussystem research, education, and clinical care.

Lagneau learned of Abel's work through physician Andrew Shenker—chair of the FDF's scientific advisory council and a member of the National Institutes of Health team that discovered the gene mutation that causes MAS.

"Once we heard Lili was interested in why some MAS children like Gaďa have cognitive or behavioral problems, we thought of Dr. Abel's previous research on the effects of the MAS gene in the brain—and his world-class reputation—and we put them in touch," says Shenker.

Lagneau's gift will help Abel track down answers to a question that haunts her: Is MAS the cause of her daughter's many cognitive issues, including an inability to speak?

"I've been exploring the molecular basis of behavior for more than 25 years," says Abel. "Lili's fund will allow me to use that knowledge to develop a mouse model for studying the poorly understood central nervous-system manifestations of MAS."

Gaďa is 5 now. She loves the sound of chimes—and dancing in her parents' arms. She gives kisses and occasionally tries to pronounce her name. Her parents spend their days working on exercises to improve her physical and cognitive abilities, and they try not to worry about what will happen to her when they get old. Lagneau says research such as Abel's gives her hope.

"All that time, I was waiting for something to happen, but once I decided to create the change, everything accelerated," Lagneau says. "I feel like we're building something that will help Gaďa's future."