By David McCartney, University Archivist
A University of Iowa Libraries collection honors the life of a former professor who helped build the field of African American studies at Iowa and nationwide. 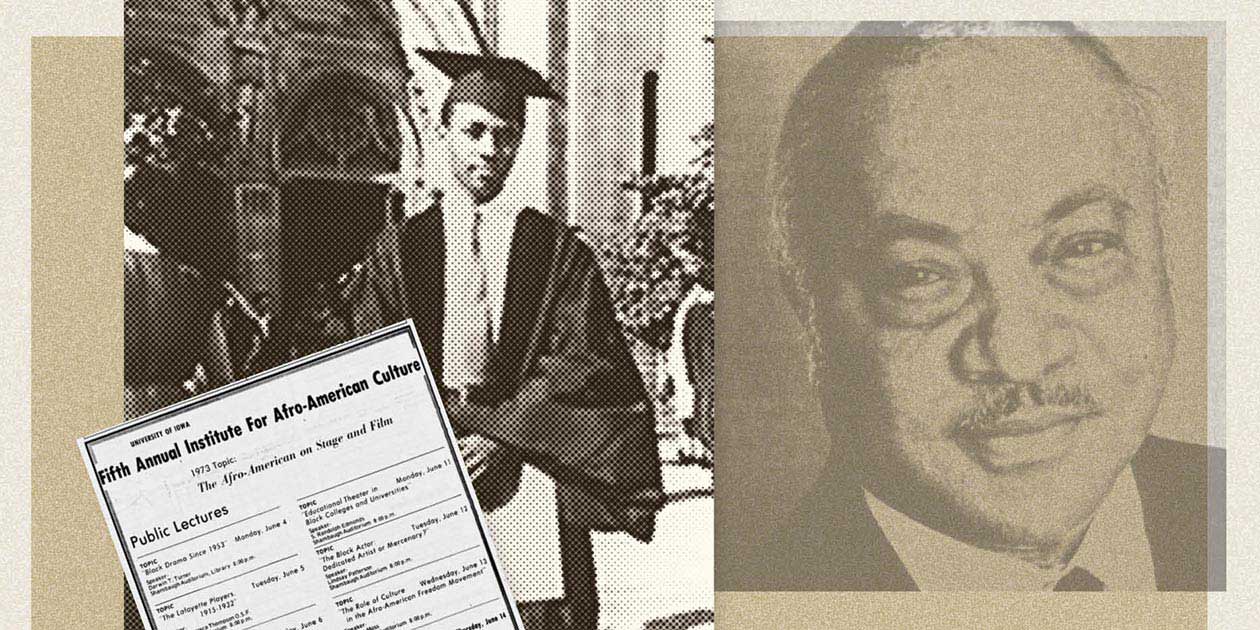 PHOTOS: UNIVERSITY OF CINCINNATI ARCHIVES AND RARE BOOKS LIBRARY; DAILY IOWAN LEFT: Turner upon graduation from the University of Cincinnati in 1947 at age 16. Right: Turner later in life. INSET: A Daily Iowan advertisement from 1973 for the Institute for Afro-American Culture that Darwin Turner led.

Darwin Turner arrived at the University of Iowa in 1972 to join the faculty of the newly established Afro-American studies program. Soon after, he became chair when Charles Davis accepted a position at Yale.

For the next 19 years, Turner developed a program that pioneered this emerging field of academic study. Iowa was among the first institutions in the nation to offer advanced degrees in Afro-American studies, providing intellectuals of Black culture the opportunity to teach and conduct research at colleges and universities across the U.S. and abroad.

Throughout his life, Turner (1931-1991) achieved milestones that contributed to the expanding discipline. A native of Cincinnati, Turner was considered a child prodigy. At age 13, he enrolled at the University of Cincinnati, graduating in only three years as an inductee of Phi Beta Kappa. He continued his studies at Cincinnati, receiving a Master of Arts degree in English and American drama at age 18. By age 25, he was awarded a PhD at the University of Chicago.

A review of the UI's general course catalogs published during Turner's tenure reveals a rich and diverse array of course offerings open to majors and non-majors alike. The 1976-78 catalog lists over 40 courses in a curriculum that included Black literature, theatre, history, political science, and advanced research techniques. Black Action Theatre, later renamed in his memory, was established during this time at his behest and continues to present thought-provoking pieces for social and cultural awareness through the UI Department of Theatre Arts.

Turner's contributions to the profession were substantial. He edited more than a dozen works of African American literature, and his original works included literary criticism and poetry. In addition, he wrote extensively for academic journals and anthologies.

The papers in the Darwin Turner collection at the University Archives are currently undergoing processing to be available for researchers to access. A significant part of the collection is a set of audio tape recordings featuring visiting speakers who participated in the Institute for Afro-American Culture, a nationally acclaimed lecture series coordinated by Turner.

Old Gold was astonished to learn of the more than 450 recordings, documenting visitors to Iowa City during the 1970s and 1980s whose lectures were broadcast on WSUI radio. Speakers include poet and essayist Rita Dove (77MFA), historian John Hope Franklin, and novelist Ralph Ellison, author of Invisible Man. The collection also includes heavyweight boxing champion Muhammad Ali's speech to a standing-room only crowd at the Iowa Memorial Union in 1967, only a few months after he announced his opposition to serving in the Vietnam War.

In 2019, UI Libraries received a Historical Resource Development Program grant of about $27,000 from the Iowa Department of Cultural Affairs to preserve and digitally reformat the recordings. The COVID-19 pandemic has slowed progress on the project, but the recordings are expected to be accessible online via the Iowa Digital Library, a website hosted by UI Libraries, by early 2021.

Turner died in 1991, at age 59, following a heart attack. Today, his legacy is remembered at Iowa through the Darwin T. Turner Awards, which recognize the scholarship of students from historically underrepresented groups, and the College of Liberal Arts and Sciences' Darwin Turner Endowment that provides additional scholarship opportunities.

The African American studies program at Iowa marks its 50th anniversary this fall. To celebrate, the program has a goal to raise $100,000 for its endowment in the next three years to create a scholarship, seminar series, student events and programs, and faculty development and mentorship opportunities that honor the legacy of Darwin Turner. To give to the Darwin Turner African American Studies Fund, visit foriowa.info/turner.

The African American studies program at Iowa marks its 50th anniversary this fall. To celebrate, the program has a goal to raise $100,000 for its endowment in the next three years to create a scholarship, seminar series, student events and programs, and faculty development and mentorship opportunities that honor the legacy of Darwin Turner. To give to the Darwin Turner African American Studies Fund, visit foriowa.info/turner.

Join our email list
Get the latest news and information for alumni, fans, and friends of the University of Iowa.
Sign up now
Related Articles
Nonfiction Essay: Dressed Up
An ocean away from family during the pandemic, a University of Iowa adjunct professor of creative writing thinks of her Nigerian father and his impeccable fashion sense.
Who's Watching From Social Media's Shadows?
During an Iowa Law panel, experts discuss the challenges of retaining privacy in the digital age.
Hawkeyes Answer the Call to Service in the Peace Corps
Iowa graduate Maurice Albertson helped create the humanitarian organization.
Can Comics Stimulate Conversations on Social Change?
University of Iowa College of Liberal Arts and Sciences Professor Deborah Whaley, an expert on race and gender in graphic novels and comics, explains why the genre can be an inviting medium for complex conversations.