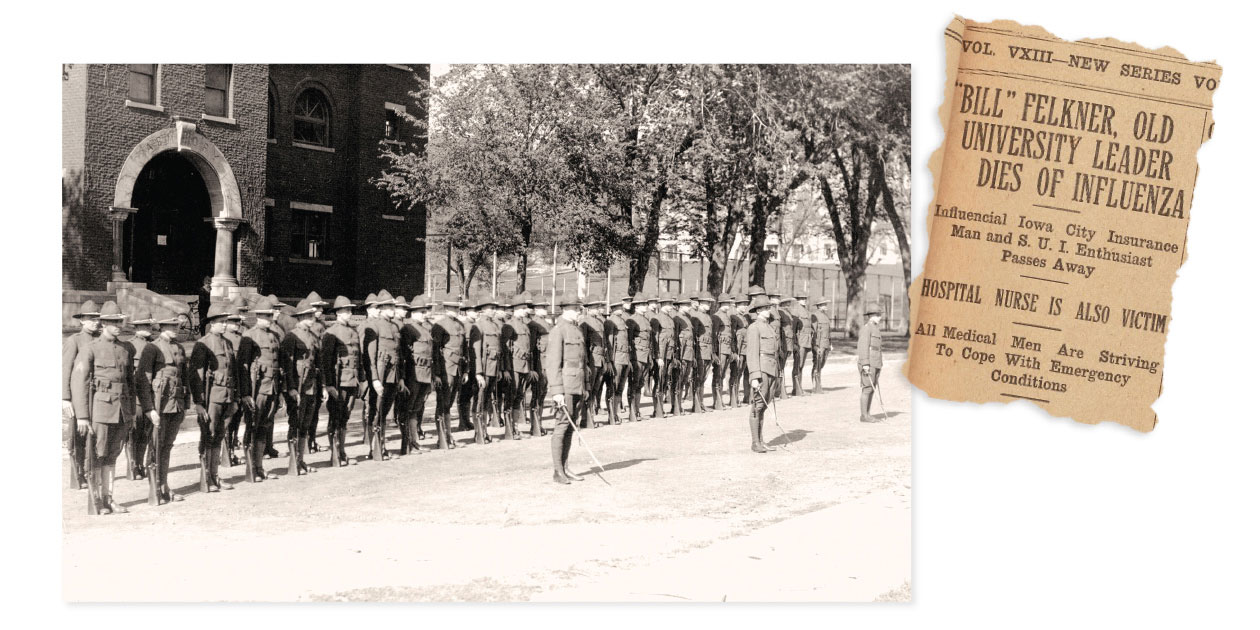 The warnings and precautionary orders were dire, eerily similar to today's directives concerning COVID-19, which closed our campus in March. Just over a century earlier, university and state officials were sounding the alarm about a deadly outbreak of influenza, a pandemic that would eventually claim up to 50 million lives worldwide by the time it ran its course in 1919.

Commonly known as the Spanish flu, the earlier pandemic first reportedly surfaced at Fort Riley in Kansas. Those serving in the military in preparation for the Great War bore the brunt of the outbreak. Like other military bases, Camp Dodge, just outside Des Moines, became a hotspot. To this day, the recorded losses there remain the state's deadliest event. It is estimated that 702 soldiers succumbed to the virus.

At the State University of Iowa, the ranks of the Student Army Training Corps swelled to nearly 2,000 young men in the summer of 1918, and the first round of the outbreak occurred on the campus that fall. Thirty-eight students and faculty members lost their lives.

To contain the outbreak, patients were quarantined in makeshift spaces after the University Hospital's isolation wards filled up. Public areas were closed, and SATC cadets were specifically barred from classes. As the flu spread across Iowa in 1918, health officials advised residents to place trays of water on radiators at home to keep indoor air moist, among other precautions.

Large gatherings were banned across the state, according to "Epidemic: Iowa Fights the Spanish Influenza," an article published by the State Historical Society of Iowa in 1981. A football game between SUI and Coe College in Cedar Rapids was closed to the public and played in a nearly empty stadium.

Until recently, the campus newspaper's accounts of this tragic chapter were not widely available to the public. A University Archives project to digitally reformat The Daily Iowan revealed that issues from a nine-month period—September 1918 to May 1919—were not among the archives' holdings. The library's microfilmed versions of these issues were of poor quality.

To fill this critical gap, the State Historical Society of Iowa loaned its set of original newspapers to the University Archives for the project. In the midst of the current pandemic, digitization of these rare issues was completed and is available online at foriowa.info/diyhistory.

The Daily Iowan editions from this period will offer us new perspectives of a century-old global crisis—perspectives that will complement our experiences today.

Be safe and be well, Hawkeyes.

Learn more about the UI's experience with the 1918 influenza outbreak.