By Leah Klevar
Students commemorate the centennial of the 19th Amendment with an examination of the decades-long movement to earn women the right to vote in the U.S. 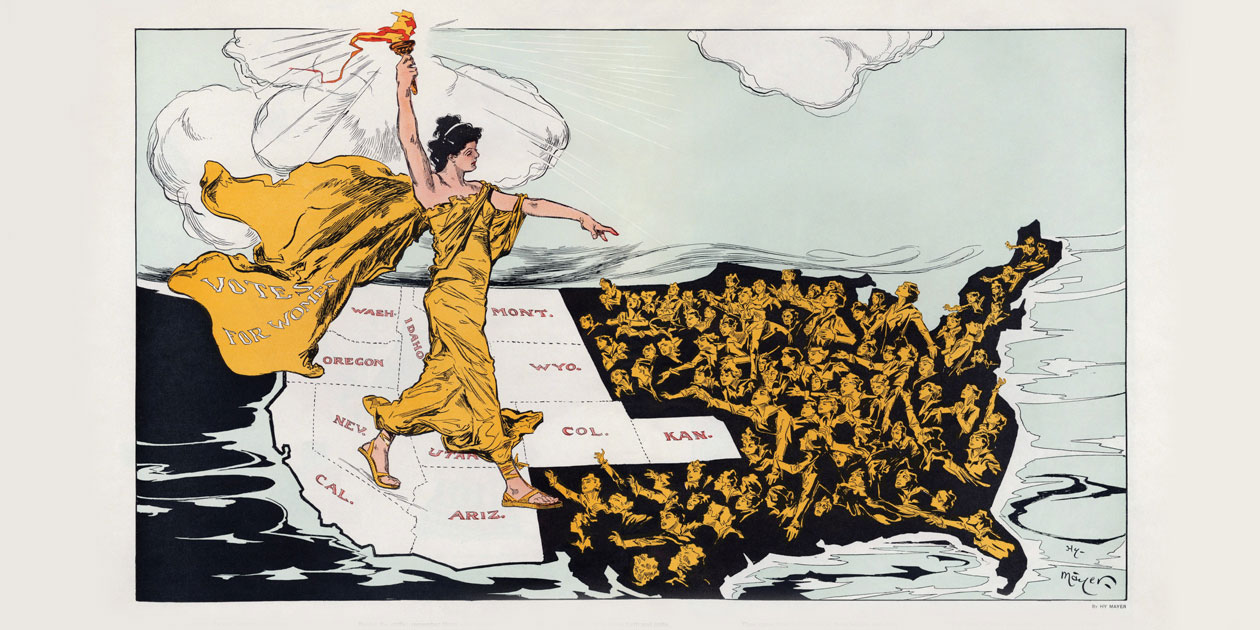 ILLUSTRATION: HENRY "HY" MAYER/PUCK MAGAZINE In 1915, Puck magazine published this illustration of the women's suffrage movement sweeping across the U.S.

Leslie Schwalm, professor and chair of the UI Department of Gender, Women's, and Sexuality Studies

This seven-week course exploring the history of women's suffrage in the United States is part of the university's Rapid Response History Lecture Series, which typically is open to both students and the public. The UI originally scheduled Hard Won, Not Done as a weekly evening lecture at the Englert Theatre. However, due to the COVID-19 pandemic, the class moved online, along with all of Iowa's spring 2020 courses, and became available only to UI students.

The women's suffrage movement was a decades-long crusade to earn women the right to vote in the United States. It took activists nearly 100 years—marked by arrests, beatings, and public dissent—to win the battle on Aug. 26, 1920. That's when Congress finally ratified the 19th Amendment, making it illegal to deny women the right to vote because of their sex.

Schwalm organized Hard Won, Not Done to commemorate the amendment's centennial—as well as the 150th anniversary of the 15th amendment, which made it unconstitutional to deny someone the right to vote based on race or previous condition of servitude. "Our work was not done with the passage of either of these amendments, and it's not done today," says Schwalm.

That's why the class explores both women's achievements and continuing inequities. It asks students to tackle difficult questions, including how racism affected the suffrage movement and why the Equal Rights Amendment failed to pass.

To cover as many perspectives as possible, Schwalm enlisted a roster of "rock star" UI scholars to present a different topic for each lesson [see sidebar]. Students complete assigned readings, attend weekly online lectures, and write short responses to each class. "Our campus has a long tradition of specializing in women's history," says Schwalm. "I wanted students to benefit from a broad exposure to that expertise."

The Equal Rights Amendment is designed to guarantee equal legal rights for all American citizens, regardless of sex. Women introduced the first version of the ERA to Congress in 1923, and in 1972, a revised version of the amendment went to the states for ratification. As of January 2020, 38 states had ratified the ERA; however, the amendment has faced decades of controversy and opposition and still is not a law.

"My hope is that students will understand the long history behind what we face today," says Schwalm. "I want them to see that women have been centrally involved in efforts to gain full citizenship rights in this country, but we aren't there yet."