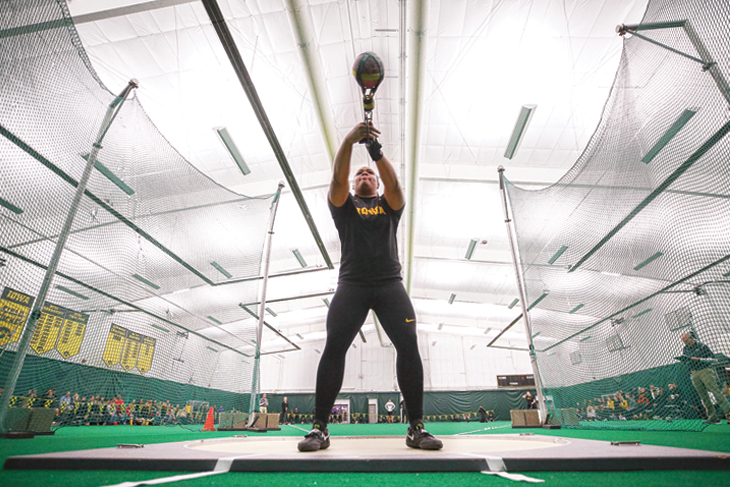 Throwing heavy objects has come naturally for Laulauga Tausaga since she attended a high school track practice on a whim. Then a freshman in Spring Valley, California, she heaved a men's shot and earned a varsity spot on the team.

Tips for the Weight Throw

Tausaga recently shared these tips for the weight throw with Iowa Magazine. The indoor event involves swinging and throwing a 20-pound ball attached to a triangular handle within a 2.1-meter circle.

Tausaga wins the shot put at the 2018 Big Ten Outdoor Track and Field Championships.
Big Ten Network host Spice Adams tries his hand at shot put against Tausaga.
Join our email list
Get the latest news and information for alumni, fans, and friends of the University of Iowa.
Sign up now

Tausaga wins the discus at the 2019 NCAA Track & Field Championships.

Tausaga wins the discus at the 2019 NCAA Track & Field Championships.
Join our email list
Get the latest news and information for alumni, fans, and friends of the University of Iowa.
Sign up now
Related Articles
A Golden Anniversary for Hawkeye Women's Athletics
From national titles to the Final Four, Iowa celebrates 50 years of sports equity and excellence.
Former Hawkeye Football Player Bill Perkins is All In on Life
The poker player, energy trader, and art collector wants you to have some fun before you die.
Know Your Stoops
Meet the famous Hawkeye football family, including Mark Stoops, the Kentucky coach who will soon face his former team in the Vrbo Citrus Bowl.
How Christine Grant Changed the Game
On the 50th anniversary of Title IX, the University of Iowa celebrates the legacy of the athletics administrator who helped level the playing field nationally and sparked a women's sports revolution.