Appropriately, my wife, Susan, and I were introduced to the University of Iowa in 1954 by attending a football game the first Saturday we were in town. A Big Ten game is truly a celebration, especially in Iowa, where the whole state focuses on collegiate football. People come from all over the state, and a huge number of students attend. The leaves have turned, the air is crisp, and the fans are wholeheartedly loyal. It is the collegiate rite of autumn. 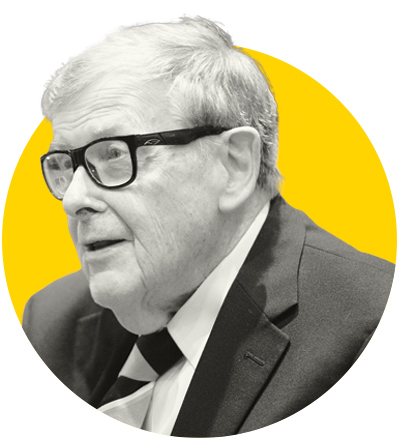 First-time visitors to the University of Iowa are astounded to find it situated on bluffs on both sides of (what else) the Iowa River. Instead of prairie, there is geological convolution, and pedestrians constantly move up and down when crossing the campus. At our first university social event, Susan told the provost, Harvey Davis, that the campus looked like a Hollywood set. He said he had never heard it described that way before.

That event was a dinner to honor Joseph Welch, formerly of Primghar, Iowa, then of Boston, where he was a member of the venerable law firm of Hale and Dorr. Using his best Iowa manner, Joseph Welch had become a national hero by reducing Senator Joseph McCarthy to ruins in the army hearings before Congress. Welch proudly described himself as just a country boy with old-fashioned values as he completely demolished McCarthy's credibility. Nevertheless, the menu for the Welch dinner in Iowa City was not for thrashers.

In addition to meeting Joseph Welch, that evening in 1954 we met another country boy who had become a lawyer. Virgil Hancher was born on a farm near Rolfe, Iowa, graduated from both the liberal arts and law colleges at Iowa, went to Oxford as a Rhodes Scholar, and then practiced law in Chicago. In 1940, he was the surprise choice to be the 13th president of the University of Iowa. Unlike Welch, Hancher did not affect a country boy manner. He was urbane and reserved. In fact, he discouraged playing the "Iowa Corn Song" at football games.

Highly regarded among American university presidents and Iowans, Hancher was less highly regarded on campus, where he was the natural target for everyone's complaints—like every president, including his successors, Howard Bowen and me. But President Hancher had a major handicap. He had never been a faculty member; the faculty gained the impression that he never really felt comfortable with them, and many of them did not feel comfortable with him.

In fact, Virgil Hancher served Iowa ably in difficult times—the Depression, World War II, and through the postwar influx of veterans and their exodus after graduation, accomplishing much with little money. I vividly remember Howard Bowen saying to me about a year after becoming president that Virgil Hancher had done exceedingly well under difficult circumstances. President Hancher stood firm against bureaucratic state intrusion into university affairs. In the 1950s, he spoke and wrote eloquently about the evils of a pre-audit that the state had thrust upon the regents universities. His forthright opposition led to its repeal.

The University of Iowa has always traveled in high-level academic company. It was an early member of the Big Ten Midwestern universities and of the Association of American Universities, known for its research. Iowa is the smallest of the Big Ten state universities in enrollment, faculty, and budget. The physical campus was underbuilt, with no freestanding university library until the 1950s and no auditorium until the 1970s. Yet much had been achieved with little in the first half of the 20th century. Innovation was encouraged. Iowa pioneered programs in speech pathology, audiology, educational testing, hydraulic engineering, surgical specialties, and both the creative and performing arts. Administrative costs and regulations were spare and did not hinder change.

Iowans have always taken great pride in their educational institutions—elementary schools, junior high and high schools, and the three regents universities. This has not always translated into a high priority for funding these institutions, however. In the 1940s and '50s, while other states invested in their public universities, Iowa fell behind. A political old guard did not feel the need to invest significantly in higher education.

That changed with the new guard of World War II veterans in both parties. Leo Hoegh was elected governor in 1954. He was an Eisenhower Republican. In his inaugural address, Governor Hoegh stunned the legislature by calling for an increase in state aid to public educational institutions as part of an ambitious legislative program. One legislator was quoted as saying, "No Iowa governor in history has presented so ambitious a program. He can't hope to get it all enacted in one session." The General Assembly, however, responded to his call for higher appropriations and an increase in special taxes. Labeled High-Tax Hoegh, he was defeated in the next election.

The Iowa regents universities owe much to the late state senator and U.S. District Court judge William C. Stuart. In the 1950s, Stuart appreciated his prewar undergraduate and legal education at the university, and he wanted future generations to have the same opportunity. As a forward-thinking conservative in the Iowa Senate, he saw other states investing in higher education, and he did not want Iowa's public universities to be left behind. Competition for exceptional faculty was accelerating nationally, as new public universities were established and existing ones expanded. A realist, Bill Stuart knew that competitive salaries were essential. Looking at comparable state universities in the Middle West from Nebraska to Michigan, he led the General Assembly in establishing a faculty salary benchmark. He reasoned that if Iowa could play in the Big Ten, it could pay in the Big Ten. Iowa's public universities continue to benefit from his visionary leadership more than half a century later. Stuart's role shows the necessity for the regents universities to reach out to the members of the General Assembly and to the citizens of Iowa. The plan to do so was conceived by Dewey B. Stuit, dean of liberal arts, and Max Hawkins, who ultimately became director of state relations. They invited several members of the General Assembly to meet with them at Old Capitol in the heart of campus. When these legislators did not appear, the two decided they would go to them. This was the beginning of the County Contact Program, implemented by the regents universities during the 1950s, '60s, and '70s. The alumni associations of each of the three universities divided up Iowa's 99 counties, with each county becoming the responsibility of one of the three. Before elections, the associations hosted a luncheon in each county during which presentations were made to all candidates for the General Assembly, both the House and the Senate, addressing the regents' concerns. This was a large undertaking, but it helped tremendously in connecting with legislators and alumni throughout the state. The alumni responded positively and became effective advocates for the regents' appropriations requests.

The University of Iowa Foundation, created in 1956, constituted another important step forward in secure funding. Historically, public universities had not wanted to "stand on a corner with a tin cup." In the 1920s, the University of Wisconsin was offered funding by the Rockefeller Foundation to build new medical facilities. Wisconsin turned the offer down, on the grounds that Rockefeller money was tainted by association with the infamous Standard Oil. Rejected by Wisconsin, the Rockefeller Foundation came to the University of Iowa and made the same offer. Iowa accepted, the General Assembly matched the grant, and the medical school and University Hospital were able to move from outmoded facilities on the east campus to new ones on the west campus. Private funds also helped build Kinnick Stadium and the first section of the Iowa Memorial Union. But in the postwar world, public universities were beginning to appreciate the importance of raising private funds systematically.

President Hancher asked me, as professor of corporate law, to organize the University of Iowa Foundation (which has evolved into the present-day UI Center for Advancement). I sought information from other university foundations and visited support foundations at the Universities of Wisconsin, Illinois, Indiana, and Purdue. In the 1950s, the University of Iowa did not allow university cars to travel outside the state, so it was necessary to make this circuit by rail. I did so via Chicago. My most memorable experience was a layover in Chicago when I could not find a hotel room. I stayed at the South Wabash YMCA behind the Hilton Hotel and stunned the university administration with my hotel expense report: 50 cents. Never let it be said that I lived high on the hog.

Iowa was relatively late in organizing a freestanding fundraising foundation. These support foundations were created because donors were fearful that state governments would reallocate any donated private funds away from the university. In addition, public university investment discretion was limited by statutory policies that excluded equities.

To keep private funds separate from public funds, the University of Iowa Foundation was established as a separate entity apart from the university itself. Organized under the Iowa nonprofit corporation statute, the foundation's board of directors selects board members, and the university president is the only university employee on the board. Notwithstanding the independence of the foundation, its staff, board, and donors are enthusiastic supporters of the university. In the fall of 1956, the first board meeting of the University of Iowa Foundation was held in Old Capitol. President Hancher went around the meeting table effusively introducing each of the founding members. When he came to me, he said, "And here is Mr. Boyd from the law school." One of the new board members turned to me and quietly said, "You must be the hired hand." I was indeed.

UI president emeritus Willard "Sandy" Boyd (81LHD) was known for his economy of words. "Never too brief" was his philosophy when it came to commencement addresses and other speechmaking. But in his forthcoming memoir, A Life on the Middle West's Never- Ending Frontier (UI Press, 394 pp.), which is excerpted here, Boyd finally allows himself some room to expound upon his famous refrain that "people, not structures, make a university great."

Boyd's memoir is largely the story of the UI over the past 65 years. He came to Iowa City as a young law professor in 1954, became provost, served as president from 1969 to 1981, and returned as interim president in 2002-03. His career at the UI was interrupted only by a 15-year interlude as president of Chicago's Field Museum. The book chronicles his childhood in Minnesota, his succession of Howard Bowen (35PhD) as president during an era of campus and societal unrest, the hiring of coaching legends like Lute Olson and Hayden Fry, and his steadfast advocacy for diversity and human rights.

A Life on the Middle West's Never-Ending Frontier will be published in May by the UI Press and can be pre-ordered at uipress.uiowa.edu.

Join our email list
Get the latest news and information for alumni, fans, and friends of the University of Iowa.
Sign up now
Related Articles
Author Sheri Salata Writes about Life After Oprah
After leaving TV, a former Oprah producer writes a book about her search for fulfillment.
Game of Thrones Creator Set to Helm Next Star Wars
After creating a cultural phenomenon, Iowa Writers' Workshop alumnus D.B. Weiss heads to a galaxy far, far, away.
You Oughta Go
A new musical based on the songs of Alanis Morissette features a storyline penned by Iowa alumna and Academy Award-winning screenwriter Diablo Cody.
Author Q&A: Jamel Brinkley
National Book Award finalist Jamel Brinkley has been in high demand since the release of A Lucky Man, written mostly in Iowa City.
Advertisement