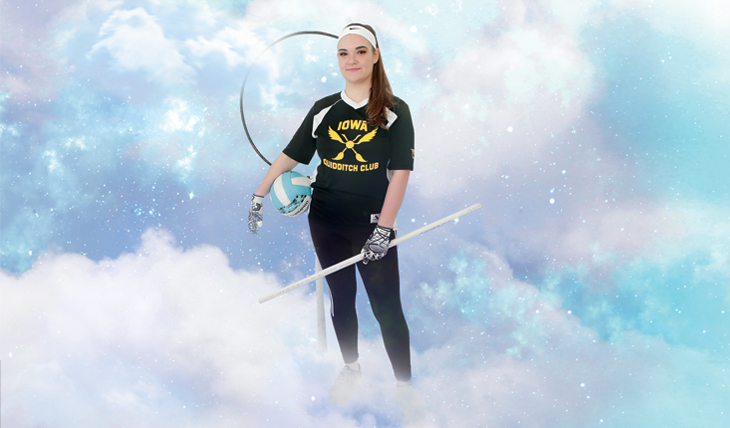 New Iowa quidditch team recruits must first understand this: They're not joining a Harry Potter fan club. Sure, players have a fondness for all things Hogwarts, including the fantastical sport dreamed up by author J.K. Rowling. But if they've come to talk about the finer points of wizarding, they've been sorted into the wrong house.

There are bodies slamming into each other. Dodgeballs ricocheting off faces. Players crashing to the turf.

At the UI and college campuses across the country, quidditch has become a real sport with real rules. And UI senior Lily Neumann has the real bruises to prove it.

"When you think quidditch, you probably think it's a bunch of nerds running around in brooms and capes," says Neumann, the club's president. "But it's so competitive. There are really athletic people playing this sport, tackling each other and being super rough."

This is the second season for the Iowa Quidditch Club, which is easily the most unique of the more than 40 sport clubs offered through UI Recreational Services. Founded by Neumann and her friend, senior Lauren Bisgard, the coed club has grown to 35 members and competes in several tournaments each semester across the Midwest. Last fall, the club hosted the Hawkeye Quidditch Invitational, which attracted a dozen teams from surrounding states. Every Big Ten school now has a quidditch club, and the sport is overseen by a governing body called U.S. Quidditch, which has 150 collegiate and community member teams who adhere to a standardized rulebook and compete for the U.S. Quidditch Cup.

In 2005, eight years after Rowling introduced the game in Harry Potter and the Philosopher's Stone, real-world quidditch originated at Middlebury College in Vermont with a group of cape-wearing, broom-riding fans. What began as a whimsical and informal activity has since evolved into a full-contact sport that's best described as a cross between rugby, dodgeball, and tag.

Neumann, an English major who was enchanted by the Harry Potter series as a kid, didn't play sports in high school. But when she and Bisgard attended a quidditch tournament as fans a few years ago in Ames, they decided to form their own team as a way to make friends and get involved on the UI campus. Even without the spells and flying broomsticks of the books, quidditch has helped Neumann discover something just as magical. "Starting this team has helped me find a place where I fit in on campus," she says. "Quidditch is welcoming of all types of people, so it's a really fun and inclusive community."

The real-world version of quidditch largely follows the same rules as J.K. Rowling's fictional game, with one notable exception—it's played on the ground rather than on flying brooms. Here are the basics of the small but growing activity: