By Ben Frotscher
3 minute read
A decade since its introduction, the Wahls Protocol continues to help those with autoimmune diseases improve their lives.

Two months after being diagnosed with multiple sclerosis, Annette Reed woke up unable to walk.

Doctors immediately put Reed on heavy-duty steroids for one week to help her body function. For Reed, the problem was just the beginning of a multi-year battle that saw her health slowly deteriorate. While her mobility suffered, she also experienced extreme fatigue and declining vision.

"I was still working, but I had lost a lot of function on the left side of my body," says Reed, a Hawkeye fan from Riverside, Iowa. "I knew that if it continued to progress, I was going to be in trouble."

Thanks to family and friends, Reed heard about the research of Terry Wahls (82MD, 86R), a clinical professor of internal medicine at the University of Iowa, and her novel way of approaching autoimmune diseases such as multiple sclerosis. After being diagnosed with multiple sclerosis in 2000 and experiencing a considerable decline in health, Wahls saw dramatic changes thanks to what is now known as the Wahls ProtocolŚa lifestyle plan that includes a Paleolithic diet, stress reduction, neuromuscular stimulation, and exercise.

UI physician Terry Wahls has spent the last decade introducing audiences to the Wahls Protocol, including through this 2011 TEDx Iowa City lecture.

Reed and her husband, Harry, went to a seminar featuring Wahls in 2010 and were convinced this was the answer to their problems. They were right.

During the past decade, Wahls has tirelessly researched how diet impacts multiple sclerosis. While she is currently leading a study funded by the National Multiple Sclerosis Society that compares a low saturated fat diet with the Wahls Protocol, Wahls says she would not be as far as she is today without the help of private support.

"My first three studies were conducted with the help of philanthropy," says Wahls. "When the data from those studies was published, the grants I was applying for started to become more and more successful."

Recently, Wahls participated in a fundraising campaign through GOLDrush, the UI's crowdfunding platform, and a total of 244 donors gave more than $35,000 to support future research projects. While there are still many unanswered questions, Wahls says eating more vegetables will always benefit your health.

"We have a ton of research that says each additional serving per day of greens or deeply colored vegetables will decrease your risk of heart disease, cancer, stroke, diabetes, obesity, and mental health problems," says Wahls. "Just adding more vegetables will have a huge impact.

Want to give the Wahls Protocol a try? Here's a recipe to get you started. 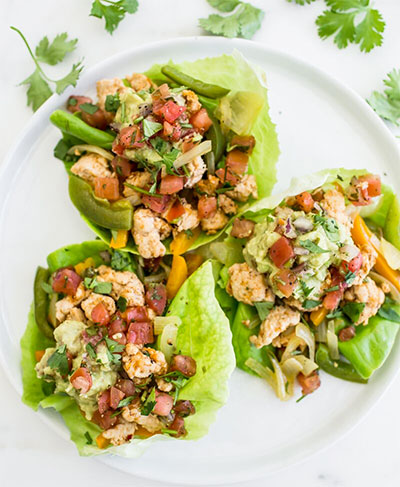 This recipe isn't a typical skillet recipe. Instead of preparing your greens with the other ingredients, you use the greens as a taco shell. Butter lettuce and Boston lettuceŚor other greens such as mature curly kale or collard leavesŚwork well.