Old Gold: Mystery in the Stacks

By David McCartney, University Archivist
Old Gold uncovers the truth behind the blood-signed papers in the university archives.

Old Gold loves detective work, especially if the investigation comes to fruition. This is a trait shared by many archivists, museum curators, and others who work in cultural institutions. It comes with the territory, and we gladly dive in as we attempt to resolve long-standing mysteries. An object or document with few, if any, clues as to its origin, age, or purpose can be tantalizing to staff and researchers.

One such mystery in the stacks confounded Old Gold for several years. A box labeled simply "anti-war petitions" occupied a space among the University Archives' student life collections. Opening this box one day, Old Gold found that there were, indeed, anti-war petitions—about 200 by his count. Each petition, identical in language with a unique signature at the bottom of each copy, criticized the university's response to the war in Vietnam. 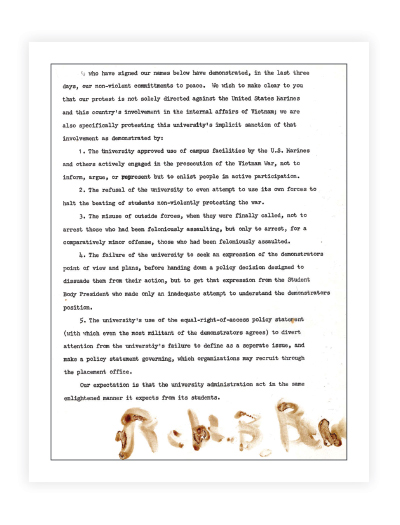 These petitions had no supporting documentation—no dates, no associated events to refer to, no correspondence, no context. All that Old Gold could determine was that the petitions were printed and signed sometime during the 1960s or early 1970s, based on references to the war. And the petitions were signed in blood.

Let the detective work begin. Sampling about two dozen names from the petitions, Old Gold determined when the signatories, most of them UI students, were enrolled by referring to university directories. Remember those? The University Archives has a complete set and Old Gold searched them, beginning with the mid-1960s editions. It became clear that all the names appear together in the fall 1967 semester directory.

Progress, but still no specific date. Next, Old Gold reviewed online historic copies of the Daily Iowan newspaper (dailyiowan.lib.uiowa.edu/). Coverage of an anti-war protest outside the Iowa Memorial Union appeared in the Dec. 6, 1967, issue recounting events of the previous day. So, Old Gold reasoned, the petitions were possibly signed on Dec. 5, 1967. For several months, it was thought—without further confirmation—that that was the correct date.

Old Gold's colleague Colleen Theisen, now the outreach and instruction librarian at Syracuse University's special collections department, did some further checking as the solution to this mystery unfolded. She eventually tracked down a Nov. 4, 1967, article appearing in the Chicago Tribune: "Iowa Demonstrators Use Blood to Write Anti-War Petitions." The event occurred the day before, Nov. 3, on the east steps of Old Capitol. According to the Tribune account, over 200 participated in the protest, evidence that is consistent with the number of petitions that comprise the archives' collection.

More in-depth coverage of this event could then be verified from local media. An account in the DI noted that students from the College of Nursing had set up blood-drawing stations in the lower level of the newly opened English-Philosophy Building for this particular protest.

So now we know the circumstances leading to the creation of these petitions, and these records have at last been contextualized so that they are more meaningful to researchers. Old Gold suspects that there are more clues in the stacks, as well. Perhaps the papers of UI President Howard Bowen (35PhD) or College of Liberal Arts Dean Dewey Stuit may shed more light on this episode.