By Josh O'Leary
The Recovering: Intoxication and Its Aftermath
By Leslie Jamison (06MFA), Little Brown and Company, 544 pp.

The archetype of the tormented writer—booze-soaked but brilliant—is an enduring one. From Poe to Hemingway, libraries are lined with authors who drank to write and wrote to drink. Here in Iowa City, the most bookish of book towns, the drunken escapades of Raymond Carver, Denis Johnson (71BA, 74MFA), and John Berryman are as legendary as the stories and poems that spun from their typewriters. 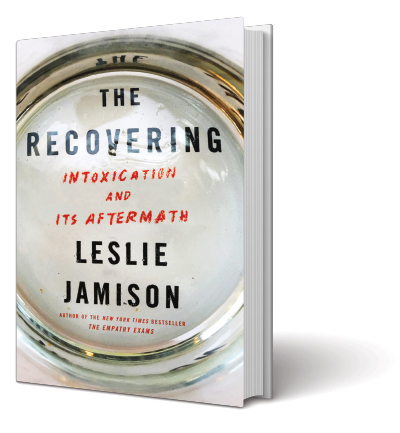 So when aspiring author Leslie Jamison (06MFA) arrived at the Iowa Writers' Workshop just after her 21st birthday, the ghosts of those mythic writers loomed large. Jamison drank long and deep from Iowa City's literary well—and everything else she could get her hands on. "I idolized the iconic drunk writers because I understood their drinking as proof of extreme interior weather: volatile and authentic," writes Jamison in her new book, The Recovering.

But that romanticized vision soon gave way to crushing dependence. The Recovering reveals how Jamison tumbled into alcoholism during her workshop days, and how she climbed from its depths after attending her first Alcoholics Anonymous meeting in Iowa City. Still, this is anything but the familiar addiction-to-redemption memoir. Jamison spent years conducting archival research and interviews for the book, which also delves into addiction's role in the literary tradition and chronicles the history of the recovery movement.

Now eight years sober, Jamison is an assistant professor at Columbia University, where she directs the nonfiction MFA program. The Recovering will be published in paperback in January and has editions in print worldwide. Jamison spoke with Iowa Magazine from her home in Brooklyn, where she lives with her husband, novelist Charles Bock, and their two daughters.

How did your research of other writers who struggled with addiction shape your book?

One thing I was interested in exploring was the ways in which sobriety and recovery can be incredibly generative forces for creativity. When I was young, I inherited a lot of ideas about the genius who writes from darkness and dysfunction. That can happen and does happen, but the stories we hear less often are about what it means to create from spaces of getting better. Those stories are out there too and are really compelling, and I wanted to shine more light on them with this book.

What was the turning point for you?

For me, the drinking had become this really corrosive force in my life. I woke up every morning and my first thought was, "What am I going to drink, when am I going to drink it, and how am I going to drink it?" There was something deeply claustrophobic about that obsession. The last night was not a car wreck or a night in jail or something dramatic like that. It was just another drunken fight with my partner and another night when I disappeared into the back of my apartment with a bottle of whiskey. I hit a point where I didn't want to live that way anymore.

How has your writing changed with sobriety?

On a very concrete level, it's easier to write when you're not waking up with a pounding headache. But on a deeper, emotional level, sobriety is about being awake in an ongoing way in my own life, and that means being aware of the whole range of human experiences—pleasure, discomfort, happiness, frustration. That heightened presence deepens my work, because for me being a writer is largely drawing on the emotional experience of the world and trying to analyze and interrogate it.