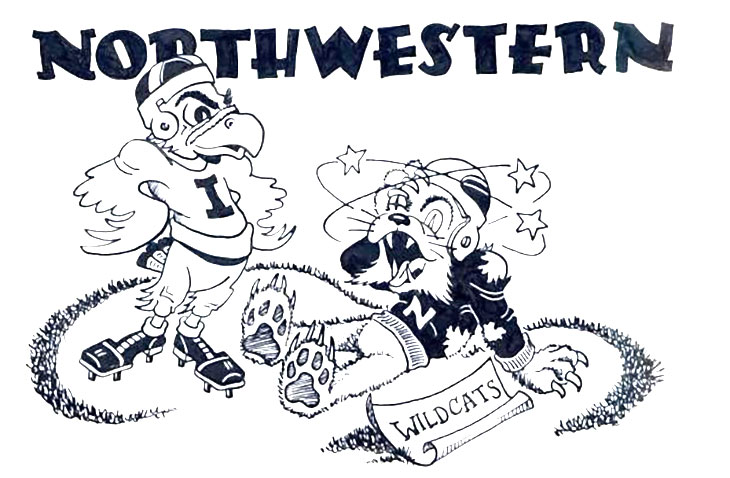 For some years now, Old Gold has been eligible to join AARP. For that matter, so is Herky, who turns 70 this year. But unlike Old Gold, Herky is as athletic and energetic as ever, and his septuagenarian-ness is truly something to celebrate. More on the celebration in a minute, but first, our history lesson.

Who hatched Herky back in 1948? The answer comes in two parts: the character by artist, and the name by creator. Since the artist's vision came first, we'll start there. 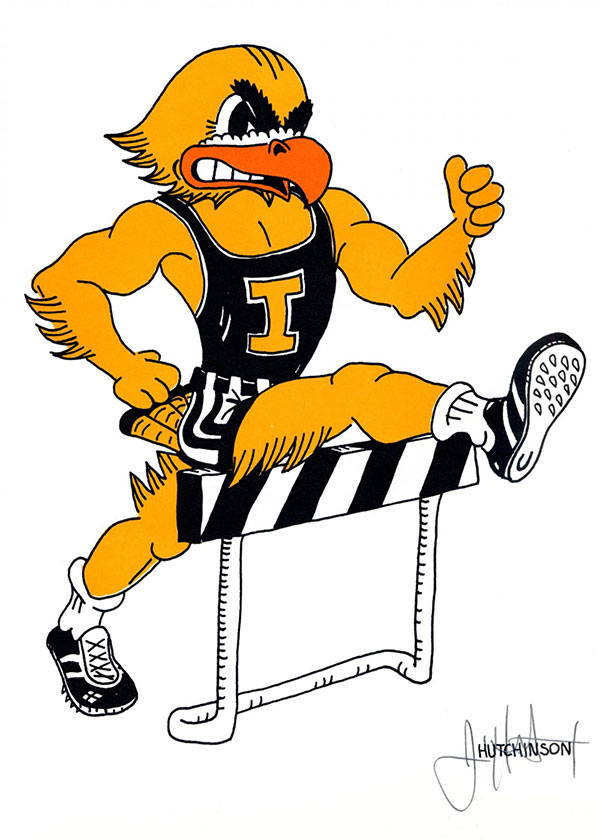 Frank Havlicek (48BSPE), the UI athletics business manager at the time, believed that the Hawkeyes needed a mascot like other B1G conference schools. By 1948, Wisconsin had its Bucky Badger, Northwestern its Willie the Wildcat, and Minnesota its Goldy Gopher. Iowa's team, long known as the Hawkeyes, needed representation, too. When Havlicek announced a contest for mascot ideas in spring 1948, the winner turned out to be close to home: Dick Spencer III (43BA), an instructor in journalism at the UI who, incidentally, was teaching the nation's first editorial cartooning course at the time.

Soon after, a second contest was arranged to find a name for the new mascot. Submitted by John Franklin of Belle Plaine, Iowa, "Herky the Hawk," short for "Hercules," was the winner. The announcement was made on July 19, 1948, and was reported the next day in a six-paragraph item in The Daily Iowan on page two.

Spencer eventually moved west to accept a publishing position in Colorado, but before he left Iowa he gave Havlicek a set of one of his earliest drawings that had been used in game programs and other publicity for the 1949 football season, along with additional samples of his early Herky work.

In 2016, Havlicek's widow, Bernice "Bunny" Weede Havlicek (40GN), and their daughter Jane Roth donated the set of 48 drawings to the University Archives. That same year, Merrill James "Jim" Hutchinson Jr. (76BGS) of San Rafael, California, donated a set of drawings he prepared as an undergraduate. The Spencer collection can be viewed online in the Iowa Digital Library.

An exhibit celebrating Herky's birthday runs until October 19 in the Department of Special Collections, University Libraries. Chloe Waryan (18MS), a recent graduate of the UI School of Library and Information Science, designed and created the display, which includes artifacts and documents from the archives. Join us and celebrate all things Herky—whether you're AARP-eligible or not.