By Shelbi Thomas
4 minute read
The ‘Avengers: Infinity War’ director receives a superhero’s welcome at his alma mater. Avengers: Infinity War co-director Joe Russo reunites with his favorite UI professor, Jay Holstein, after 25 years to discuss filmmaking and the influence of his time in Iowa City. Video by Matt Jansen.


Only days after Avengers: Infinity War debuted with the biggest box office opening weekend in cinematic history, Joe Russo—who co-directed the Marvel blockbuster with his brother, Anthony—returned to the University of Iowa campus, where his passionate pursuit of storytelling first took flight.

Russo (92BA) visited his alma mater April 30 to speak to students and fans, reminisce with college friends, and pay tribute to Jay Holstein, the popular UI religious studies professor who influenced his films.

“Fifty years at the University of Iowa—60,000 students have gone through his classes. You wouldn’t have Infinity War without him,” Russo said at a public event hosted by the UI Lecture Committee and FilmScene. “A lot of his teachings have found their way into our storytelling at Marvel. He understands the human narrative and mythology, and he inspired me to start telling my own stories.” 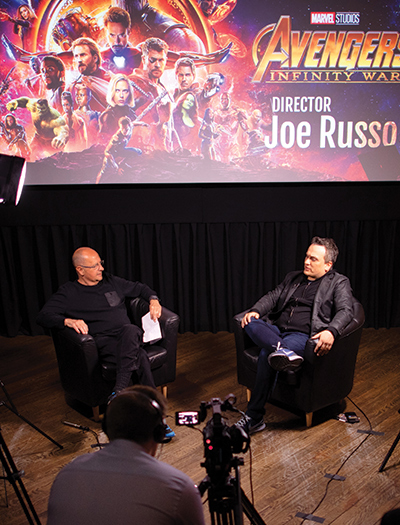 Infinity War earned $630 million worldwide in its first weekend to unseat Star Wars: Episode VII—The Force Awakens as the highest-grossing opening film of all time. Featuring more than two dozen superheroes played by Hollywood A-listers such as Robert Downey Jr., Chris Hemsworth, and Scarlett Johansson, the ensemble blockbuster pits the Avengers against a supervillain conspiring to wipe out half of the life in the universe.

“The theme of the film is, ‘What is the cost to be a hero in a world where there are no easy answers?’” Russo says. “Our intent is to explore the idea of doing what’s right no matter the cost, because I feel that’s an incredibly important issue for humanity moving forward.”

Infinity War is the latest in a series of Russo Brothers productions that have captured the hearts of fans and critics alike and includes cult favorite sitcoms Community and Arrested Development, as well as Marvel movies Captain America: The Winter Soldier and Captain America: Civil War. The duo also has filmed an untitled sequel to Infinity War due in 2019. During his visit to Iowa City, the younger Russo traced this journey from Hawkeye to one of the top directors in Hollywood.

A self-described comic book and film fanatic with an interest in writing, Joe Russo enrolled at the UI to take advantage of the literary community cultivated by the Iowa Writers’ Workshop. The Cleveland native majored in English and developed a passion for acting while studying abroad in the United Kingdom, but also took classes in subjects as varied as philosophy, poetry, and theater arts.

Most inspiring to him were the religious studies and comparative literature courses he took with Holstein, whom he worked with as a teaching assistant during his senior year. Russo says the lessons in deconstruction from Holstein’s class at UI can be seen in his inclination to ground Marvel’s superheroes, such as Captain America, who transforms from an unquestioning patriot to an insurgent in The Winter Soldier and Civil War.

“My brother and I like to explore taking a myth and pulling it apart in a way that exposes the humanity of the characters,” Russo says. “These characters are flawed and human and accessible.”

Iowa City was not only where Russo developed valuable storytelling techniques, but also where he met his wife, Alicia, and formed many friendships that endure today. Whether imagining dialogue for passersby at the Coralville Reservoir, watching GoodFellas four times in one week at the Englert Theatre to study filmmaking technique, or reading Where the Wild Things Are in costume to friends in the courtyard of Burge Residence Hall, Russo unleashed his creativity at the UI. The director holds such fond memories of his college days that he even planted a shout-out to Iowa City in The Winter Soldier.

After living out a “10-year overnight success story,” Russo says he and his brother are now determined to help aspiring filmmakers achieve their dreams. Their new film studio, AGBO, will focus on bringing the voices of diverse, up-and-coming directors to mainstream audiences.

“I think it’s incumbent upon us in Hollywood to give people the ability to identify with characters through race, sexual orientation, and gender,” Russo says. “Black Panther was a resounding voice from the audience: we want more of this and we want it now. I think you’ll see more characters rise up and take over the narrative moving forward who are incredibly diverse and hopefully will speak to many different cultures.”

While in Iowa City, Russo also discussed the importance of hard work and determination with young fans at City High School and dissected his movie for UI students studying film and storytelling at a FilmScene screening. “He’s so generous with his time and wants to be that spark for someone down the road,” says college friend Rhonda Roeder Evans (91BSN, 13MSN), a donor coordinator on the UI Hospitals and Clinics blood and marrow transplant care team.

Wendy DeCora (00BA), an app developer in Iowa City who has an interest in film, was moved by Russo’s visit. “It’s really exciting to see someone who went to Iowa make it as big as you can make it, and it’s interesting to see how Holstein influenced him, because those were some of the most intellectual and intensive classes I took,” says DeCora, who studied film and video production, communication studies, and computer science at the UI. “It gives you a lot of hope to go ahead and pursue your dreams, because you don’t know where they might lead.”