Life Out of a Backpack

By Tyler Strand
A recent grad finds joy in minimalism along the Appalachian Trail.

Drew Boysen (15BBA) wasn't heeding his own advice. Less than a year after he spoke at the winter 2015 UI commencement and encouraged hundreds of fellow undergrads to follow their dreams, the marketing and entrepreneurial management graduate knew he wasn't living that message. It was time for a change. "I didn't want to start off my early 20s just playing it safe,"ť says Boysen, who felt unfulfilled as an associate project coordinator in his native Coralville.
Emboldened by his entrepreneurial education to pave his own path, Boysen decided his next step wasn't a different job, but rather an imposing physical and mental challenge: thru-hiking the Appalachian Trail. He researched the trail for several months, quit his job in February 2017, and started the 2,190-mile route in March from Georgia's Springer Mountain. Carrying trekking poles, his phone, a tent, and a few other essentials in his backpack, Boysen began his journey with minimal expectations. He began hiking a daily average of 15 miles, administering KT tape to his aching knees and joining two other hikers he met along the way who became "friends for a lifetime." Trekking through heat, cold, rain, and snow in one change of clothes, Boysen camped most nights, staying at hostels or hotels about once every 10 days. He gained his "trail legs"ť around mile 600, when his legs no longer seemed to tire, and steadily increased his daily average to 25 miles. 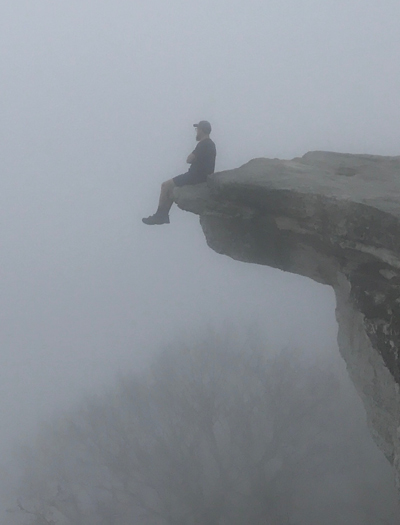 Boysen's early attempts at healthy sustenance—Clif Bars, tortillas, and tuna packets—steadily shifted to sugary Little Debbie snacks and rehydrated potato dinners. Too exhausted to fire up his stove after long days on the trail, he sent it home. And instead of mailing resupply packages of food to upcoming towns, Boysen stopped at gas stations and grocery stores, stuffing his bag with a few days' worth of fuel to account for the daily 5,500 calories he burned. "It was like a kid's dream," Boysen says. "You just grab everything that looks good and throw it in your bag."
Those food stops were the closest thing to extravagance for Boysen during his 133-day journey in discovering the joys of simplicity and minimalism. "You're living out of a backpack—living below the poverty level," says Boysen, "and I was just as happy as could be."
Among a welcoming community of hikers and their supporters known as "trail angels," Boysen realized the importance of being surrounded with positive people. He embraced the lack of distractions, lived in the moment, and learned the truth in the cliché, "It's not the end that matters; it's the journey," when he completed the trail last July at the summit of Mount Katahdin in Maine. Says Boysen: "What I thought was supposed to be the grandest moment of the hike wasn't really that great."
Boysen returned to the outdoors last fall to thru-hike the 800-mile Arizona Trail and also trekked parts of Nepal and Vietnam earlier this spring. This month, he'll embark on the 2,650-mile Pacific Crest Trail along the West Coast—a journey that will last through the fall—before he returns home to pursue a new job.
Boysen has yet to decide which career path he'll take next, though he's well-versed in facing challenges head-on. At the UI, he overcame his fear of public speaking, embraced his independence, and expanded his business and communication skills as a member of the Student Philanthropy Group. His time on the trail also may have helped uncover a secret to fulfillment. Says Boysen: "If you're doing something you love and with people you love, you don't really need much."