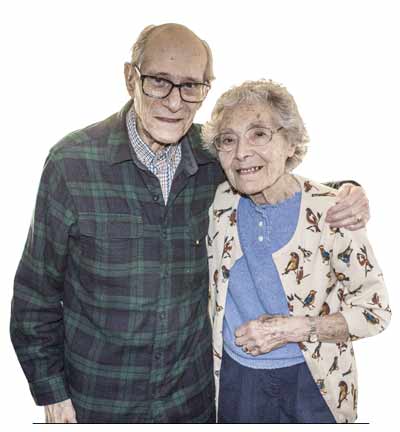 Through eight decades as a couple, Arthur and Miriam Canter have shared a love of music, art, and community involvement. Those mutual interests sparked a love connection in September 1940 at a Jewish freshmen student mixer through UI Hillel. Miriam taught Arthur (46BA, 48MA, 50PhD) how to dance, and the two developed a quick rapport. “We just took a liking to each other, so we started to date,” says Arthur, who celebrated 72 years of marriage with Miriam on Jan. 27, 2018.

By sophomore year of college, the couple sat together in geology and psychology classes, studied in Schaeffer Hall, and attended university dances featuring big-name orchestras at the student union. Their inseparableness changed when Arthur was drafted to World War II before junior year for non-combat duty and was reassigned as a voice interceptor for the Signal Corps. Miriam transferred to the University of Minnesota to pursue a Latin American studies major, though the two kept in touch through letters. Arthur was discharged in December 1945 and married Miriam at Temple Judah in Cedar Rapids the following month.

Arthur finished his degree and became a clinical psychologist at the UI in 1950, while Miriam served as a teaching assistant in the Spanish department. The Canters also have volunteered and given to the UI School of Music, Old Capitol, Hancher Auditorium, and UI Libraries, where the rare book room within Rita Benton Music Library was named after them.

At 95 and 96 years of age, Miriam and Arthur share the secret to their lasting love with smiles and laughter from their Iowa City living room. “The big thing is, you don’t think about it,” Miriam says. “I don’t think we ever sat down and decided we were going to be this or that to each other. We just assumed things would go well—and they do.”

Please submit your marriage, birth, or anniversary stories to uimagazine@foriowa.org.