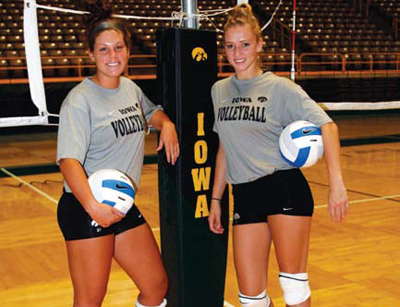 Déjŕ vu? Hawkeye fans might think so when they spot two familiar names—albeit on an unfamiliar roster.

For the first time since the late 1970s, a Hilgenberg and a Kittle are teaming up at the University of Iowa—but as members of the volleyball team rather than the Hawkeye football offensive line. Mara Hilgenberg, a junior setter from Lake Forest, Illinois, and Emma Krieger Kittle, a freshman outside hitter from Iowa City, are daughters of two famous Iowa football players from the early Hayden Fry era.

Mara's father is Jay, a 1977-80 letterman for the Hawkeyes, who went on to become a seven-time NFL Pro Bowler and a member of the 1985 Super Bowl champion Chicago Bears. Emma's father is Bruce, a letterman for the Hawkeyes from 1977 to '79 and also in '81. Jay and Bruce were more than teammates: they were also roommates at a time when football players were required to live in the dormitories during their entire careers.

The irony of their family heritage is not lost on the two new volleyball teammates, who only met each other for the first time on their campus visit.

"I'm proud," says Mara Hilgenberg. "I love representing the University of Iowa and I think it's great that basically my whole family went here."

Emma Krieger Kittle agrees with that sentiment: "A lot of my family members have gone here, so it's exciting to be part of something that has been passed down."

UI head volleyball coach Sharon Dingman is impressed with the efforts of the Hawkeye legacies.

"Mara's feisty," Dingman says. "She's very competitive. Some of Jay shines through in her sometimes with that 'hit 'em in the mouth attitude.'"

Dingman calls Kittle "the most pleasant surprise" on the team. "We knew she was a great athlete," says the coach, "but she has surpassed our expectations of her volleyball ability."

By late October, as the Hawkeyes headed into the second half of the regular season, Hilgenberg had played 67 sets and distributed 655 assists (9.78 per game), with 136 digs, 24 blocks, and eight ace serves. Krieger Kittle had played 54 sets with 98 kills (.194 attack percentage), 24 digs, and 11 blocks.

What sort of advice has father passed down to daughter? Both former Iowa athletes advised their fledgling Hawkeyes to have fun in college, while Kittle added a warning that the time would fly by.

Jay Hilgenberg runs a golf course he developed in Kenosha, Wisconsin, while Bruce Kittle works for the Iowa Department of Corrections and is a parttime pastor and a line coach for the Iowa City West High School football team. They both often turn up at Carver-Hawkeye Arena to cheer on their daughters and the rest of the squad.

"Oh, yeah," says Krieger Kittle when asked if her father will be a regular at Hawkeye volleyball matches. "He better be."