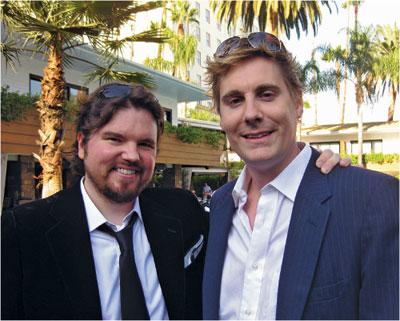 A man wakes up with an airtight cube over his head. Slowly, the cube fills with water that threatens to drown him. How will he survive?

Marcus Dunstan, 98BA, and Patrick Melton, 97BA, have an idea—and it's not pretty. As screenwriters for some of the Saw movies, they regularly put characters through the wringer—from predatory lenders who literally give up a pound of flesh to the man in the cube scenario who uses a pen to give himself a tracheotomy. The Saw movies, in which a serial killer traps average people in life-threatening moral dilemmas, place second only to the Friday the 13th series as the highest-grossing U.S. horror film franchise of all time.

Dunstan and Melton first joined forces at Iowa, where they studied communications, donned the Herky uniform as the UI's official mascot, and made movies together. "It all happened at the UI," says Dunstan, who jokes that the Illinois natives drew inspiration for their frightening writing from their days as pledges for Delta Tau Delta.

Both moved to Los Angeles after graduation to pursue their screenwriting dreams. Since winning the Bravo filmmaking reality competition Project Greenlight in 2005, they've seen their haunting words come to life in Feast, The Collector, and Saw IV, V, and VI. The scripts begin as outlines that transform into movies over months of rewrites. "People think of writing as solitary," says Melton, "but making movies is a collaborative process."

Melton and Dunstan find their ghoulish muse in unlikely places ranging from AC/DC songs to art shows. Both have vivid childhood memories of being scared by horror films made by John Carpenter, Tobe Hooper, Wes Craven, and Dario Argento. Says Melton, "Even now when I see a hedge, I think someone on the other side is going to grab me."

What scares the pair the most, though, is the specter of unemployment. "We're fortunate to get paid to do what we love," says Melton, "but in the film industry, there are no guarantees." Dunstan adds, "We don't rest, because that's when the competitor strikes."

With current projects including Saw 3D, a remake of David Cronenberg's Scanners, and an ABC TV pilot about a haunted hotel, it looks like these two horror writers won't have to face their ultimate fears anytime soon.