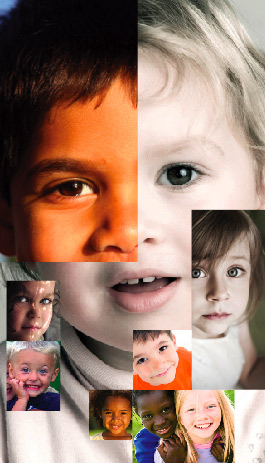 The University of Iowa has partnered with the University of Pittsburgh to create, manage, and coordinate the first-ever encyclopedic database on how the faces of healthy children develop. The institutions will share a five-year, $9 million grant from the National Institute of Dental and Craniofacial Research to create this project, called FaceBase. In total, the initiative will involve the efforts of 12 sites nationwide and ten additional grants for different projects that focus on a specific aspect of craniofacial development.

The FaceBase data will provide crucial information to help doctors intervene at the detection of facial defects or stop them from happening in the first place. The project continues the UI's longstanding tradition of craniofacial clinical care and research. UI professor of medicine and UI Children's Hospital pediatrician Jeff Murray—who also runs the university's Murray Lab, which specializes in the study of birth defects and prematurity—will serve as co-principal investigator, along with Pittsburgh colleague Mary Marazita, professor of oral biology and human genetics and director of the Center for Craniofacial and Dental Genetics.

Calling FaceBase the "epitome of interdisciplinary research," Murray says the two universities will compile existing and new information into one integrated database that is available at no cost to scientists and clinicians worldwide. The database will bring together biochemical, molecular, genetic, and imaging findings related to human facial and skull development.

Scientists do know that, in early pregnancy, colonies of embryonic cells form near the primitive mouth and produce highly specialized cells. These cells develop into the bone, cartilage, ligament, nerve, and soft tissue visible on a developing face at a first sonogram. But, between the first cells and that first sonogram, a great deal unfolds developmentally that confounds doctors. As part of its data, FaceBase will include a list of genes and proteins that drive the embryonic cells, as well as a clearer picture of the cellular dynamics that dictate tissue formation.

"FaceBase will essentially create a 'how-to' manual of all the instructions that are needed to properly develop the mid-face, which includes the nose, upper lip, and palate, or roof of the mouth," Murray says. "This knowledge can then go a long way to preventing defects such as cleft lip and palate and jaw malformations."

Says Marazita: "It's like exploring the cosmos. We can see certain things, but we don't know in detail how they became what they are or how they got where they are, and there are additional aspects that are not even visible to us right now."