View All From You
Share
IOWA Alumni Magazine | October 2009
Heroes on Horseback
By IAM Staff
In an unusual campaign, American support to the Northern Alliance defeated an army of at least 50,000 Taliban fighters in two months. 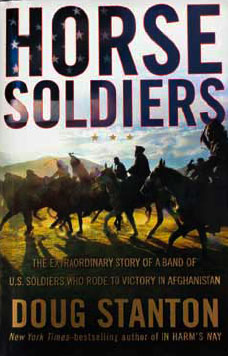 Unbeknownst to the American public, the U.S. sent men into war shortly after 9/11, when a quartet of CIA paramilitary officers and three commanders with 50 highly trained Special Forces personnel were deployed to Afghanistan. Not even wives and families knew where the men had gone or what they were doing.

It's a story of a few hightech capabilities amidst Old World realities, where an Afghan's unwrapped turban dropped down the side of a fortress under siege gives Americans a handhold and the ability to scale 80-foothigh mud brick walls.

It's a tale of long-limbed U.S. soldiers climbing onto small mustang-like horses to dash over precipitous mountain trails into battles between the Northern Alliance and the Taliban. By ride's end, many soldiers are not only saddle sore, but bleeding and unable to dismount without help.

It's a story of heroism and respect, where colorful Afghan warlord and one of the leaders of the Northern Alliance, Abdul Rashid Dostum, says, "I asked for a few Americans. They brought with them the courage of a whole army."

Doug Stanton, 88MFA, conducted hundreds of hours of interviews with Afghans and Americans, visited battle sites in Afghanistan, and reviewed countless government documents, as well as other reports, to record the remarkable cooperation leading up to the taking of Mazar-i-Sharif, a city of 300,000 people suffering under Taliban rule in northern Afghanistan.

When the troops—both Afghan and American—ride into Mazar-i-Sharif early in November 2001, a grateful population greets them. Cognizant that the Afghans had been fighting for years to rid their country of the Taliban, U.S. soldiers decide not to hoist an American flag: "This is their victory," one of the men says.

Stanton captures the drama and nuance of a new brand of fighting in the war against terror. He discovers bravery in all camps, especially in an ambush in the fortress of Qala-i-Janghi. Only one American died in that bloody battle, thanks in part to air support and rescue efforts by fewer than a dozen men in the U.S. Army Tenth Mountain Division, but also because of the unstoppable courage shown by the U.S.'s Afghan cohorts in the Northern Alliance.

As Stanton tells it, relatively few U.S. soldiers and 15,000 Afghan troops "succeeded where the British in the nineteenth century, and the Soviets in the 1980s, had failed."