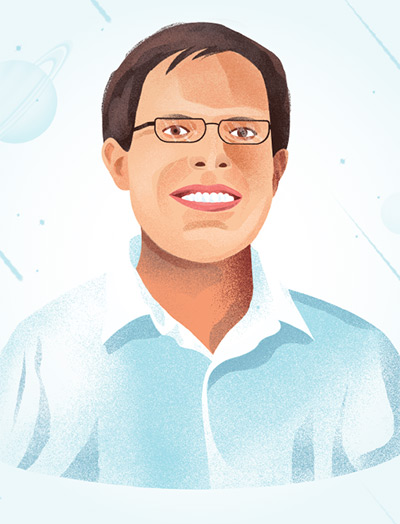 Brian David Metzger, 03BS, is an Indiana Jones of astrophysics. While pursuing some of space’s deepest secrets, he and a team of intrepid astronomers and astrophysicists struck gold, tracing its origins—and those of all other heavy metals in the universe—to the explosive swan song of two dying stars.

“I’m involved because I’m ‘the kilonova guy,’” says Metzger, who majored in physics, astronomy, and math as a University of Iowa undergraduate and now is a theoretical astrophysicist at Columbia University. He coined the term “kilonova”—referring to the collision of two neutron stars—in 2010, before scientists had ever actually observed such an event. When they finally witnessed one last summer, Metzger’s Harvard astronomy colleagues invited him to join the international consortium of scientists who were analyzing the incredible occurrence.

What were they witnessing?

On Aug. 17, 2017, an intergalactic “chirp” traveled 130 million light-years to Earth, setting off interferometer detectors, which identify space-time ripples caused by gravitational waves. This unexpected cosmic vibration first triggered the Virgo detector in Pisa, Italy, at 8:41 a.m. Eastern time, and milliseconds later, it pinged the two Laser Interferometer Gravitational-Wave Observatory detectors in the United States—one in Washington state and the other in Louisiana. News of the alerts spread like wildfire among more than 70 astronomy laboratories and observatories across the globe and sent scientists gazing giddily skyward, trying to pinpoint the location and source of the ripples.

What they found, using data from both the interferometer detectors and traditional telescopes, left them awestruck. In the constellation Hydra, two neutron stars, each the size of a small city and packed so densely that a single teaspoon of its matter weighed one billion tons, had spiraled together into a colossal explosion that produced both gravitational waves and light. The violent impact also flung a massive cloud of radioactive gold dust across the galaxy. “We saw the direct creation of heavy elements,” says Metzger. “We found the source of gold.”

He also discovered that his theoretical predictions about how a kilonova would emit light—blazing blue and then fading to red within a few days—were correct. “It was an unbelievable experience,” he says. “It really does make you feel like you’ve outsmarted the universe, for once.”

According to Metzger, this event has ushered in a revolutionary era of “multi-messenger astronomy,” because, for the first time, scientists have been able to analyze both gravitational and light waves from the same event. Using such fundamentally different information to explore the universe gives astronomers and astrophysicists a much more holistic way to study the skies. “We have a new astronomy laboratory now, and that’s a big discovery in itself,” he says.

The assistant professor of astrophysics plans to be part of this revolution—and hopes to bring his students along, too. “My UI professors inspired me to love science,” Metzger says. “I want to help launch my own students’ careers, and I know their breakthroughs will be even greater than ours. It’s important to let everybody in on the secret.”