View All From You
Share
IOWA Alumni Magazine | January 2018
PLAYMAKER: Marching to Her Own Beat
By Tyler Strand 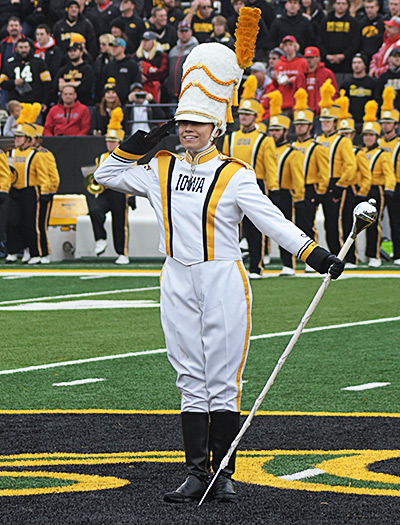 On Iowa football game days, Analisa Iole leads the 260-member Hawkeye Marching Band onto the Kinnick Stadium field to the cheers of an enthusiastic crowd. During her carefully orchestrated routine, Iole twirls a five-foot mace through the air, plants it in the turf, and offers a salute. As Iowa’s first female drum major since World War II, Iole hopes many young women in the stands are paying attention—and feel inspired to follow in her footsteps.

Before Iole, only three women performed as drum major in the band’s 136-year history. Each served during World War II when male candidates were limited: Rose Day and Mary DuMont in 1943 and Doris Lotts, 47BA, in 1945. Following that era, the Hawkeye Marching Band was exclusively male, while women participated in the Scottish Highlanders, until Title IX took effect in 1972. That’s when percussionist Robyn Schulkoski, 75BM, and piccoloist Julie McCartney joined the marching band.

Women have held leadership positions in the organization for the past 20 years, says recently retired director Kevin Kastens, though none have claimed the highest-ranking student position until Iole this past spring. “A lot of people say ‘it’s about time,’ but it was a different set of circumstances because not a lot of women went out for the [drum major] position,” Iole says. “Now that a woman has the position and it’s visible, I think it will encourage more women who are younger than me to audition.”

Fifteen years of ballet, two years as drum major for the Marshalltown High School marching band, and three years on the Hawkeye Marching Band’s undergraduate teaching staff for the clarinet section prepared Iole for the Kinnick Stadium spotlight. This past spring, she was one of six candidates who auditioned to replace previous Hawkeye Marching Band drum major Isaac Anderson, 17BM, commissioned by the U.S. Army earlier this fall. She took the reins alongside Anderson during halftime of this past September’s Penn State game and will retain her role next fall. Iole, a human physiology major who recently applied to the UI College of Pharmacy, says: “I like being in a position where I can express my ideas and make sure the people in the band have their ideas heard.”

Iole juggles many roles as drum major, including conductor, cheerleader, and mediator. For an 11 a.m. game day kickoff, she hops in a van before sunrise to unload gear at the UI Recreation Building and later directs the band through rehearsal at Kinnick. After rehearsal ends, Iole gives a pregame speech atop a ladder about the Hawkeyes’ opponent and a projection of the game’s outcome. “I’m not expected to predict that we’re going to lose a game ever,” Iole says with laugh.

During the game’s third quarter, Iole and Golden Girl Kylene Spanbauer greet patients on the top floor of UI Stead Family Children’s Hospital. Along with this visit, Iole says the best game days end with her directing “The Victory Polka” to celebrate a Hawkeye win.