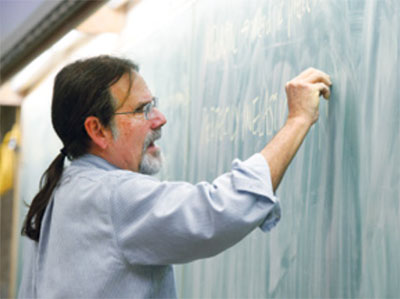 Sparked by a NASA grant, a team of UI physicists is planning a potential mission to study the mysterious, powerful interactions between the magnetic fields of the sun and Earth.

Physics and astronomy professor Craig Kletzing leads the group drafting a proposal to NASA that demonstrates how UI could build and launch the instruments and spacecraft to research the magnetic fields. Kletzing's team recently received a $1.25 million grant to conduct an 11-month concept study. The UI will vie with four other institutions for an additional $165 million through NASA's Explorers Program to fund the mission in the coming years.

NASA is keen to study these magnetic interactions because of their effects on Earth. If not for the magnetic bubble surrounding our planet, the sun's supersonic winds would inflict doses of harmful radiation that would affect most, if not all, life.

Solar wind does reach the Earth, however, through openings created when the Earth and sun's magnetic fields touch. When these holes are sustained, the solar wind pours through in events called cusps. The energy coming from these magnetic interactions creates effects that can be mesmerizing—particularly auroras, which are also known as the northern and southern lights. But it also disrupt communication from satellites and other forms of communication on Earth.

"We want to understand how this chain of events works because it is important for modern technologicalsociety," Kletzing says of the UI's proposed mission, called Tandem Reconnection and Cusp Electrodynamics Reconnaissance Satellites, or TRACERS.