An Iowa City writer and sustainable food expert gets to the core of the "democratic fruit." 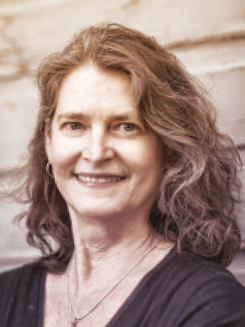 PHOTO: Curtesy of Will Jennings

Susan Futrell grew up climbing neighborhood apple trees, eating warm apple pie, and reading about Johnny Appleseed. Her lifelong love of Golden Delicious and other varieties ripened at an early age in her family's kitchen.

More recently, Futrell, 78BS, 04MFA, has visited dozens of orchards around the country, getting to know the people, stories, and economics behind the iconic American fruit. The result is her first book, Good Apples: Behind Every Bite, a 262-page stroll through the apple industry published this month by the University of Iowa Press. The book follows the apple's journey from seed to shopping cart, with stops in laboratories, warehouses, and marketing meetings along the way.

"When you go to the store or to the farmers market, most people don't know what it takes for that apple to look good and taste great," says Futrell, who earned her UI master's in nonfiction writing. "I want to help readers appreciate the people who grow the apples as much as they love the fruit itself."

Futrell has worked in the food and agriculture industry for more than three decades, including 25 years in distribution, sales, and marketing at a Midwest natural foods cooperative. She is currently director of marketing for Red Tomato, a Massachusetts-based sustainable produce distributor that represents a network of 20 orchards in the Northeast. To research her book, Futrell spent time at orchards in New England and Iowa, where she divides her time. She also traveled to Washington state, where more than 60 percent of the nation's apples are grown. Futrell's professional connections have given her a unique look into the challenges family farms face as the grocery industry becomes more global and competitive.

The apple's story, like that of America itself, began with immigrant roots. Before there were appletinis and Apple watches, European settlers planted the first apple trees in the New World, and orchards spread west alongside the pioneers. In her book, Futrell explores the idea of 19th century activist Henry Ward Beecher that the apple, because of its versatility and accessibility, is the "true democratic fruit." Says Futrell: "It's such wonderful common ground."

After biting into apples from coast to coast, Futrell's favorite remains the variety that reminds her most of her childhood: the Jonathan apple, a tart, red-skinned classic often put to good use in cooking.

"But I've almost never tasted an apple I didn't like," she laughs.