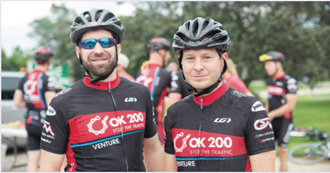 In a world often shrouded in darkness, Andrew McCoy wanted to shine a light.

His friends told him he was crazy to pedal 200 miles in one day. Yet McCoy, 99BSE, 03MS, 06PhD, turned a personal challenge to cycle from Des Moines to Okoboji, Iowa, into an opportunity to draw attention to the problem of human trafficking, which enslaves 27 million adults and 13 million children worldwide.

As the father of two elementary school–aged daughters, McCoy was horrified to hear of the abuse, neglect, torture, and sexual exploitation that children as young as his have suffered. Once he learned about human trafficking from his church community, he put his faith to action. In 2011, McCoy co– founded the Okoboji 200, inviting avid bikers to join him to "stop the traffic."

Now in its sixth year, the ride attracted more than 60 cyclists this past summer and has collected more than $225,000 to benefit two recovery houses for survivors of human trafficking: Dorothy's House in Des Moines and overseas at Lighthouse Ministries in Kathmandu, Nepal.

Already, the OK200: Stop the Traffic nonprofit has helped Dorothy's House open its doors earlier this year, provided human services for more than 800 children and young women in Nepal, and funded a film, Don't Get in the Van, that educates Southeast Asians on ways to avoid abduction.

Although the physically demanding Okoboji 200 bike ride involves climbing hills and battling headwinds, McCoy draws strength from the survivors he's met. On a recent trip to Des Moines to speak against human trafficking, young Nepalese women who bore the scars of brutal beatings and electrocutions shared how they were rescued from a brothel. "These are the stories that build unity in our fight and compel us to ride," says McCoy. "It is a simple reaction to evil and a desire to act."