View All From You
Share
IOWA Alumni Magazine | November 2016
Shakespeare at Iowa
By Shelbi Thomas
T he copy of William Shakespeare’s First Folio, opened to Hamlet’s famous speech, used to spend its days locked away in a vault protected by three heavy-duty doors, guards, and an alarm system. Yet this past September, the Folger Shakespeare Library in Washington, DC, entrusted the UI Libraries with the priceless book for Iowans to view as part of the prestigious First Folio! The Book That Gave Us Shakespeare traveling exhibit. The UI was selected as the only Iowa stop on a nationwide tour commemorating the 400th anniversary this year of Shakespeare’s death.

“We are incredibly excited to have the opportunity to showcase one of the most important books ever printed,” says University Librarian John Culshaw. “How appropriate that the First Folio visit the University of Iowa in Iowa City, the only UNESCO City of Literature in North America.” 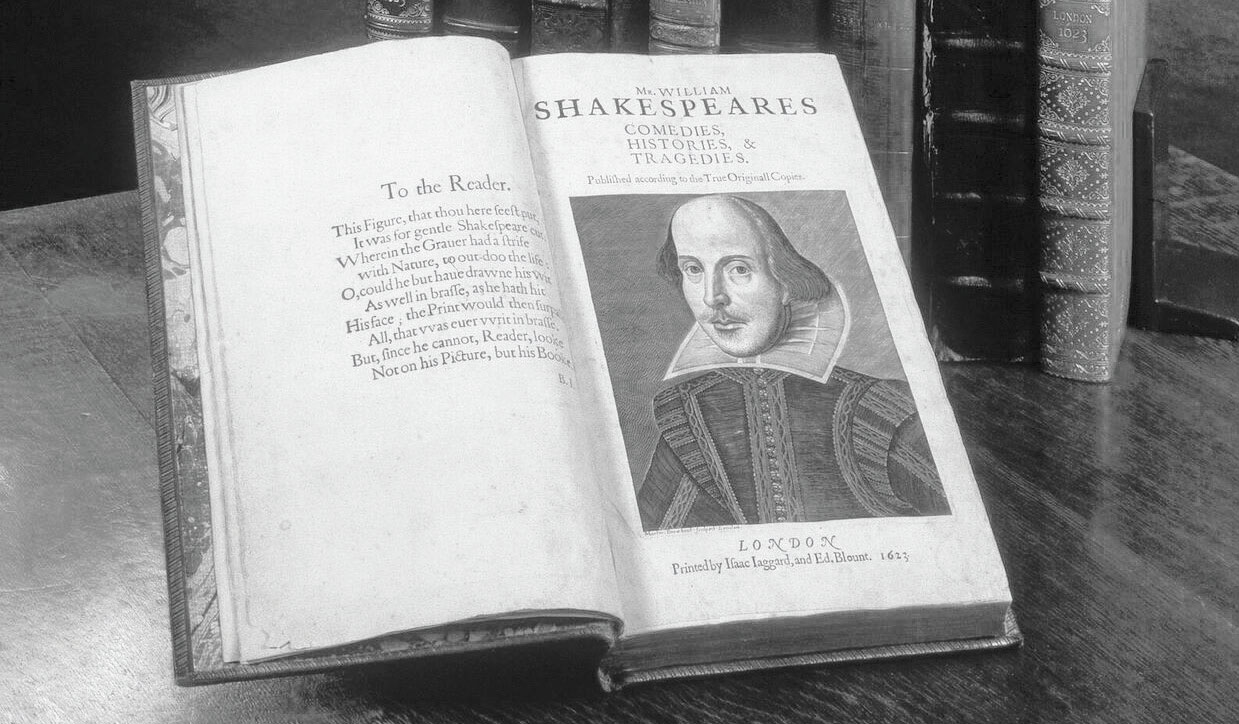 More interested in writing for the theatre than preserving his work for posterity, Shakespeare never published an anthology of his work. Some of his plays were printed by others, while several favorites had never been published at all.

Fortunately, in 1623—just seven years after Shakespeare’s death—two actors gathered and mass-produced the first collection of his plays, known as the First Folio, to honor their talented friend. Featuring 36 plays divided into comedies, tragedies, and histories, the edition reveals Shakespeare’s tremendous influence on theatre and the development of the English language (which includes introducing more than 1,700 words to the vernacular, some highlighted in the sidebar on p. 30). “Shakespeare during his lifetime was known as a man of the theatre, but the printers and publishers made him into a bestselling author and playwright,” says UI associate English professor and Shakespeare scholar Adam Hooks. “Without [the First Folio], Shakespeare’s works might be scattered to the wind.”

Indeed, half of Shakespeare’s plays—including Macbeth, Julius Caesar, and Twelfth Night—may never have been read, performed, or adapted for contemporary audiences had they not been first published in the First Folio. “The First Folio is the book that gave us Shakespeare. Between its covers we discover his most famous characters—Hamlet, Desdemona, Cordelia, Macbeth, Romeo, Juliet, and hundreds of others—speaking words that continue to move and inspire us,” says Michael Witmore, director of the Folger Shakespeare Library. “Shakespeare tells the human story like no one else. We are delighted that we can share this precious resource with people everywhere.” 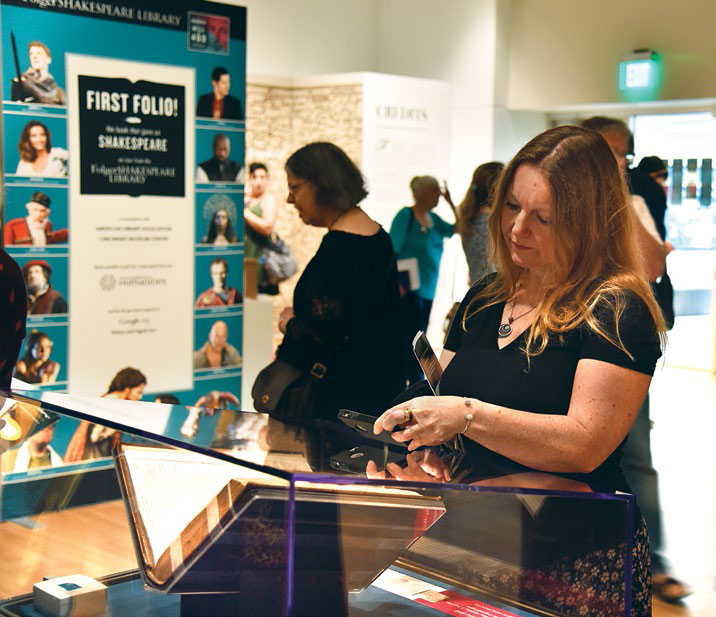 Of the 234 remaining copies of the First Folio, more than a third belong to the Folger Shakespeare Library, where scholars can compare the different versions resulting from proofreading that continued throughout the printing process. The Folger Shakespeare Library partnered with the Cincinnati Museum Center and the American Library Association to bring a First Folio to each of the 50 states, the nation’s capital, and Puerto Rico this year with support from a major grant by the National Endowment for the Humanities.

As Iowa City welcomed the arrival of the First Folio this past fall, it joined a yearlong celebration of Shakespeare that spanned the world to the Globe Theatre in London and his hometown of Stratford-upon-Avon, England. Though the First Folio spent only four weeks on the UI campus, more than 50 related activities, events, programs, performances, lectures, and readings continue into this month throughout the state. These include participation by Iowa’s K-12 schools and their libraries, as well as conferences and accreditation workshops for the state’s educators with an impact that will endure long after the festival’s conclusion.

Many of these festivities highlight the UI’s academic strength, rich resources, and long and distinguished history of teaching Shakespeare. The university is known for its English, writing, and theatre arts programs, which partnered with the UI Libraries to add their expertise to the festival. UI Libraries’ Special Collections also hosted complementary exhibits to feature some of its most treasured books, such as the Second Folio printed in 1632, which UI adjunct assistant English professor Stephen Sturgeon says is “the most dependable item in our collection that rocks people back on their heels.” 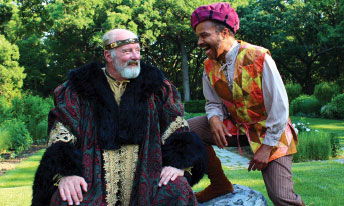 PHOTO: REPERTORY THEATER OF IOWA KING LEAR IN DES MOINES: Statewide festivities kicked off this past June with the Repertory Theater of Iowa (RTI) performing King Lear against the backdrop of the historic Salisbury House and its English gardens in Des Moines. On June 15-18, 2017, the RTI’s Shakespeare on the Lawn series resumes with performances of The Taming of the Shrew.

Now 400 years after his death, Shakespeare remains a towering influence over the arts and humanities worldwide. “Whether you had a bad experience reading Shakespeare at school or love him, everyone acknowledges he’s important,” says Hooks. “So many people identify with his characters and learn about a broad range of human experiences through his plays.”

The recent renovation of the Main Library to include a gallery made it possible for the First Folio to come to the UI. With its updated exhibition space, the Main Library Gallery provided a place where the Folger Shakespeare Library knew its valuable volume—last purchased for $6.2 million in 2001—would be safe and secure.

Much like a diva on tour, the First Folio was accompanied to Iowa City by a bodyguard and a stringent set of rules for its care. While the First Folio received the bulk of the spotlight, other books in the UI Special Collections also needed to gussy up for their time to shine.

To prepare the volumes featured in the exhibits, the UI Libraries Preservation and Conservation Department spent six months mending, repairing, and mounting them in custom-made protective cradles. Exhibition installation took two weeks, as library staff adjusted the temperature, humidity, and lighting in the gallery to create the ideal conditions for the aging books.

Explains UI Conservator Giselle Simon: “The books will be open to one page for threeand- a-half months. To me, that’s a hard workout for a book—especially ones from the 1600s.”

SHAKESPEARE IN THE CLASSROOM

Shakespeare at Iowa events were designed to provide statewide educational outreach both in and outside of the classroom. With support from the National Endowment of the Humanities, the UI hosted workshops for Iowa educators on teaching Shakespeare at the sixth grade through college levels. Teachers collaborated and shared strategies to help bring Shakespeare’s plays to life for their students. Also this semester, UI Special Collections Librarian Amy Hildreth Chen, 06BA, taught an honors first-year seminar on “The History of the Book: The Game” featuring a card game where players compete to collect the most important books of Western civilization, and UI associate English professor and Shakespeare scholar Adam Hooks instructed a course on “Hawkeye Shakespeare,” where students participate in quatercentenary festivities and explore the UI Libraries to learn more about the famous playwright. These classes supplemented the usual Shakespeare offerings that meet some of the requirements for English, English education, and theatre arts majors, as well as the ample opportunities that community members have to watch or perform in Shakespearean dramas. 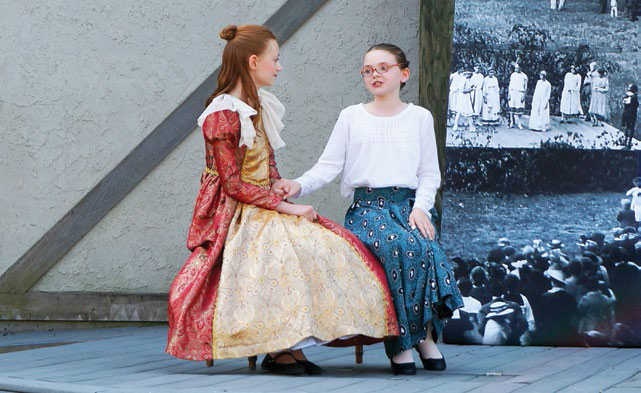 Iowa City’s tradition of honoring Shakespeare dates back to at least 1916, when locals met at City Park to remember the 300th anniversary of his death. One hundred years later, the legacy continues as Iowa Citians took the Riverside Festival stage to perform scenes from their favorite Shakspeare plays. 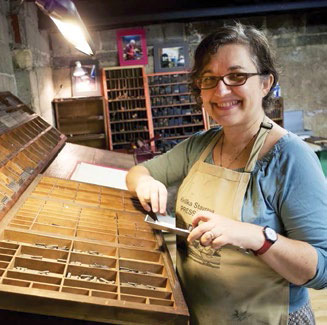 As one of many statewide Shakespeare events held in conjunction with the UI’s higher education partners, Cornell College English professor Kirilka Stavreva, 97PhD, delivered a public lecture in Mount Vernon, Iowa, on how she printed Shakespeare’s Sonnet 122 on an old iron hand-press. The Bodleian Libraries at Oxford University in England invited artists worldwide to contribute hand-printed copies of Shakespeare’s sonnets in this quatercentenary year.

A World Without Shakespeare

Here is but a sampling of the plays and words that the world would be lacking without Shakespeare’s First Folio:

The Comedy of Errors

The Taming of the Shrew

The Two Gentlemen of Verona

A dish fit for the gods

All the world’s a stage

Be all and end all

Beware the Ides of March

If music be the food of love, play on

It was Greek to me

Neither rhyme nor reason

Refuse to budge an inch

Something wicked this way comes

Such stuff as dreams are made on

Too much of a good thing

Any comments about this article? Email uimagazine@foriowa.org.