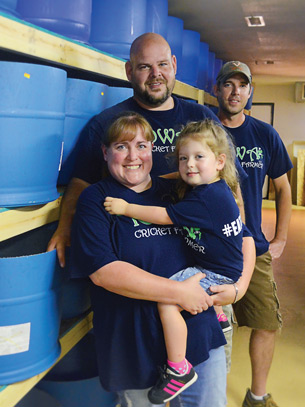 The corn lining the highway into Keystone, Iowa, stretches tall on a late August afternoon. But it's at an old diner on Main Street, and not in Benton County's rich soil, where one of the state's most unique farming operations grows.

Inside, Jared Van Hamme, 06BS, 10BA, and Becky Herman, 13MA, wipe sweat from their brows as they prepare for their first harvest. While most farmers work to keep pests from feasting on their crops, here insects are the crop.

Van Hamme and Herman, along with her husband, Jason, are the founders of Iowa Cricket Farmer. Their brightly painted building in the center of Keystone—population 610 humans, 350,000 crickets—houses the first farm in the state that raises the protein- packed insects specifically for human consumption.

On this afternoon, the cricket wranglers transfer a small batch of insects from one of their dozens of teeming barrels into a freezer, then vacuum pack them into plastic bags. They hope to one day ship as many as two million crickets every six weeks to national health food manufacturers, who roast the bugs and grind them into protein powder for products such as energy bars and snack chips.

Although insects are a dietary staple elsewhere in the world, Americans tend to be a bit more squeamish when it comes to bugs on their dinner plate instead of the bottom of a shoe. The health benefits, though, are easier to swallow: Not only are crickets loaded with protein, but they're also rich with iron and magnesium and relatively light on calories.

"People just have to get over the bug factor," says Herman. "Reality TV is the only place you really see people eating them in our country."

Naturally, the farm has raised a few eyebrows around Keystone. Some were concerned about the noise at night or the town being overrun by crickets, but good insulation and a tightly controlled environment have quelled those worries. Still, telling people you're a bug farmer in the middle of corn country more often than not draws a quizzical look.

Says Van Hamme: "They usually say, 'You're doing what?'"