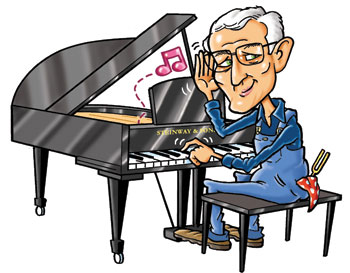 Although Steve Carver has been the head piano technician at the prestigious Juilliard School in New York City for the past four years, he still considers Hancher and the UI School of Music home.

With more than two decades of experience as the UI's piano tuner, Carver jumped at the chance this past October to help Hancher executive director Chuck Swanson, 75BBA, 76MBA, and his team select a grand piano from the Steinway & Sons factory in New York. The piano will be a centerpiece of Hancher's new building when it opens next fall.

Hancher's previous concert grand piano was moved before the 2008 Iowa City flood devastated the old building, but was later damaged in storage. As Hancher's re-opening day draws closer, the UI team sought a new Steinway that could be used for the auditorium's wide range of needs. In the end, the team chose the Steinway Model D, which Carver says demonstrates a good balance of brilliance and resonance. The piano is on display at West Music in Coralville until it finally moves to the grand stage later this year.

For others also in the market for a new piano, Carver offers these selection tips: