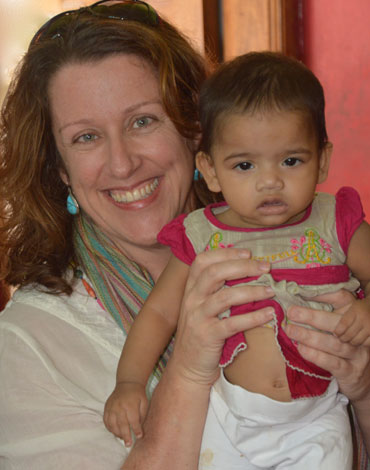 rom Bangladesh to Tanzania, Rebecca Arnold has witnessed firsthand the power of education in improving public health around the world.

She remembers the young Bangladeshi girl who delayed marriage to finish high school and pursue a degree in nursing. Then, there was the Tanzanian woman raising her children in poverty, who summoned the courage to leave an abusive relationship and become a public advocate for HIV patients in her community. Inspired by their transformations, Arnold has devoted her career to teaching life-saving health messages—from the importance of hydration to the dangers of smoking—to people in developing countries.

Arnold first began working in the publishing industry, but three years with the Peace Corps as a community health educator in Madagascar—as well as a job focusing on HIV prevention and healthy lifestyles in Tanzania—convinced Arnold to turn her passion for social justice into a full-time career. She then enrolled as a student in the UI College of Public Health and completed her practicum with Cooperative for Assistance and Relief Everywhere (CARE) in 2010, helping activists in Burundi, Uganda, and Rwanda instruct their communities against gender-based violence.

Last month, Arnold, 10MPH, received the UI's 2015 International Impact Award for her outstanding work in enhancing people's lives in countries throughout Africa and Asia. "I am inspired by the power of communication to affect behavioral and social change," says Arnold, now a senior program officer for the Johns Hopkins Bloomberg School of Public Health Center for Communication Programs. "When done well, communication can give a voice to vulnerable, at-risk, and marginalized populations."

Since summer 2012, Arnold has been director of the Bangladesh Knowledge Management Initiative in Dhaka, developing strategies to aid the Bangladesh Ministry of Health and its partners in promoting healthy behaviors. Her team has created an eToolkit and eight video-based eLearning courses to equip 45,000 field workers to counsel Bangladeshi families on issues like nutrition and family planning. The Quad Cities native has already seen dramatic improvements in the country's coordination of health communication efforts, and the program now serves as a public health education model for other nations.

Arnold, who also received the 2013 Outstanding Alumni Award from the UI College of Public Health, has enjoyed being part of a movement that involves policy and advocacy, as well as communication at the grassroots and national levels. "I love being on the frontlines of global public health," she says. "I'm living my dream."