View All From You
Share
IOWA Alumni Magazine | December 2015
City of Literature
By Nora Heaton
Students circa 1957 gather around Paul Engle, who led Iowa City's ascent to international literary renown. 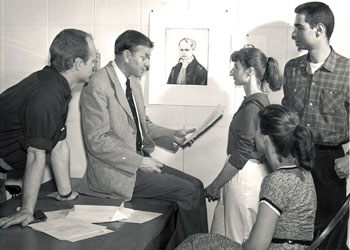 The celebrated Iowa Writers' Workshop, four decades of visiting writers hosted by the International Writing Program, the 40-plus Pulitzer Prize winners who have studied or taught at the University of Iowa—all reflect an enormous impact on literature. Such contributions culminated in UNESCO's 2008 designation of Iowa City as its third City of Literature, still the only one in North America.

Farhad Khoyratty, a 2010 International Writing Program resident from Mauritius, Africa, once described Iowa City as a "community of writers...where being a writer was seen as something so ordinary and wonderful at the same time." Indeed, this town was built by wordsmiths and from blueprints crafted by booklovers. On sidewalks and in Craftsman houses along leafy streets, there's evidence of a deep and lasting appreciation for literature.

So how and why did a small hamlet, nestled in cornfields and miles from a major metropolitan area, become one of the world's most revered literary hubs? Answering that question is the purpose of the new UI English course titled "City of Literature," taught by Professor Loren Glass.

Offered for the first time this past fall, the course originated from a 2012 UI film of the same name, which featured local scholars, historians, and writers illuminating the story of Iowa City's literary past. Glass, who specializes in 20th-century American literary history and culture, appeared in the film to share his perspective. When the idea of a semester-long class devoted to the City of Literature arose, Glass jumped at the chance to develop a course that's open to all undergraduates.

"City of Literature" begins with the 1936 founding of the Iowa Writers' Workshop and traces Iowa City's milestones through its UNESCO designation. Students read poems, short stories, novels, and essays by faculty and graduates of the Workshop, International Writing Program, and Nonfiction Writing Program along with memoirs by writers who spent time here. Since practically everyone who is anyone in the literary world at least visited the UI—many times also staying to study or teach—the body of work available is so vast and so varied that it encompasses the entire trajectory of post-war American literature.

Faced with the daunting task of creating a reading list from an almost infinite anthology, Glass carefully selected books for the debut course that were either written here or mention Iowa City. To include as many great writers as possible, without overwhelming students with too many assignments and long novels, was a real challenge. He wanted to assign texts across the historical timeline; as such, the course has featured dialogue about the Vietnam War, women's liberation, and the civil rights movement. Glass also wanted to include texts authored by writers diverse in identity and interests, and in various forms.

Glass begins each class with a brief lecture focused on a longer piece or several shorter selections, then opens the floor for discussion. This semester's readings have included Kurt Vonnegut's Slaughterhouse Five, W.P. Kinsella's The Iowa Baseball Confederacy, Joy Williams's, State of Grace, John Irving's The World According to Garp, and current Workshop director Lan Samantha Chang's All is Forgotten, Nothing is Lost. Many of the readings reference Iowa City landmarks such as the Foxhead or Prairie Lights Books.

During one class period, students consider Dylan Thomas' famed villanelle, "Do Not Go Gentle Into That Good Night." A quality liberal arts education anywhere in the United States can provide a rousing discussion of the celebrated poem, and a thorough professor might also play an audio recording of Thomas reading the poem aloud. "City of Literature" offers these experiences, too. But it also includes an account of an evening when Thomas read the same poem inside the Old Capitol, intoxicated and unruly, and did not himself go gentle into that good night. In hearing this account, students ponder how an audience in 1950s Iowa City might've responded, while also discussing the culture of Iowa City back then.

Jackson McNally, a history student currently enrolled in the course, said he appreciates this two-fold approach. "It's very different from a traditional English class, which is why it appealed to me in the first place," McNally says. "It serves just as much as a history class as it does a literature class."

In 1847, when the University of Iowa was founded, there was no such thing as a creative writing program. Would-be writers simply headed out into the world to find experiences to inspire their work. The idea of attending school to learn to write seemed absurd. But the UI would soon challenge that norm, offering its first creative writing class, "Verse-making," in 1897. In 1922, the UI announced it would accept creative work as theses for advanced degrees, becoming the first major university to do so. Paul Engle, 32MA, a young poet from Cedar Rapids, was among the first to earn a master's degree in English that included a creative thesis.

The Writers' Workshop was formally founded in 1936, and was strategically named. The word "workshop" intended to invoke the idea of writing as a craft—which suggested the technique and mechanics of creative writing could, in fact, be taught and learned. Based on an informal show of hands at the beginning of the semester, Glass estimated 80 to 90 percent of the students enrolled want to be writers.

"When all those students said they hoped to be writers, I wanted them to understand how different it is to say that now than a century ago," says Glass, pointing out how a formal education structure changed perspective on writing as a real career.

The intriguing story of the Writers' Workshop was part of what drew UI student Kaitlin Andersen to the course. Says Andersen, a freshman English major, "My main objective in signing up for 'City of Lit' was to advance my understanding of Iowa City's cultural ties to literature, and the people behind the scenes who made it all come alive."

If there was one person who did that, students learn, it was Engle. Named director of the Workshop in 1941, Engle guided the program through its most formative years. A passionate believer in writing as an art form, he persuaded the country's most renowned writer to teach at Iowa, and every writing legend who passed through Iowa City raised the community's prestige. Glass once wrote that Engle "built up the Writers' Workshop from an obscure local experiment to an internationally famous literary center," and students read excerpts of Engle's administrative documents to better understand his motivations.

During one recent lecture, the class discussed how Professor James Alan McPherson, 71MFA, describes the sense of community in Iowa City that

inspires the Workshop model. In the fall 2008 issue of Ploughshares, which he edited, McPherson described masses of volunteers working together to sandbag roads and the droves of shoppers leaving grocery stores with bottles of water to deliver to people affected by the devastating floods that year. These acts, he wrote, are why Iowa City is a community of "neighboring." Though originally an agriculture term that described farmers who helped one another with crops in times of need, "neighboring" now describes any helpful human gesture. "In places like Iowa City, such 'neighboring' gestures are normative," McPherson writes. He went on to add, "Paul Engle, who created both the Writers' Workshop and the [International Writing Program], had this tradition in his blood."

To further study this long and varied tradition, Glass said the department hopes to continue to offer the class once each fall. Glass plans to continue teaching some of the most central figures in Iowa City's literary canon, like Flannery O'Connor, 47MFA, and Philip Levine, 57MFA, but will keep rotating texts so that each year's course offers fresh material to students. Built word by word by a passionate neighborhood of writers and readers, the City of Literature offers an everlasting bookshelf from which to choose.

Perhaps some of the students who told Glass they hoped for a career in writing will one day have a novel, story, or poem listed on the syllabus. The thought is quite possible. Iowa City has a way of building writers.