View All From You
Share
IOWA Alumni Magazine | February 2015
On Safari
By Shelbi Thomas
An Iowa Voyagers photographer captures the untamed beauty of East Africa.


Most people take a few hundred photos on vacation. Captivated by the sight of exotic wildlife in the stunning landscape of East Africa, John Balzer snapped 25,000. 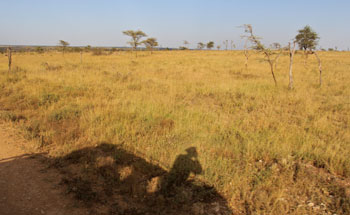 John took the majority of his wildlife pictures—including this "self-portrait"—from the comfort of a safari vehicle equipped with a two-way radio that the driver used to pinpoint photo opportunities. 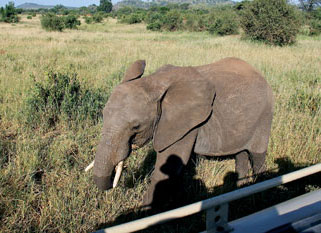 Balzer initially only agreed to the safari to appease his wife. Excited by the prospect of observing an elephant in its natural habitat, Melanie Maddox Balzer, 70BA, convinced John to join her for a two-week tour of Tanzania and Rwanda with the UI Alumni Association's Iowa Voyagers.

Though John, 69BA, was skeptical at first that they'd spot much wildlife from a safari vehicle, the photography enthusiast quickly discovered otherwise. From the safety of a nine-passenger Land Cruiser, the Balzers could peer out the roof hatch or the large side windows for optimal views of the animals. "I thought we'd see an elephant from 500 feet away," says John, a retired marketing consultant. "Instead, an entire herd came over to our vehicle. We could've touched the sides of the elephants; that's how close they were."

To add to the rich sightseeing opportunities, the Iowa Voyagers spring tour coincided with the annual migration of hundreds of thousands of wildebeest and zebra, as well as animal birthing season.

John experienced chills as he came face-to-face with a gazelle who had just given birth, as well as a baby giraffe awaiting its mother's approval to cross the road. Although he ended some days feeling hot and tired and "looking like I'd been in a coal mine," it only took a colorful bird flying by to rekindle his wonder at all the natural beauty.

The dust of the Serengeti plains eventually took a toll on John's camera's power zoom—but not before it recorded the natural splendor of Lake Victoria, the Ngorongoro Crater, the Olduvai Gorge, and the Serengeti and other Tanzanian parks and reserves. He also captured the colorful personalities of the nomadic Masai people, often draped in red cloths and jewelry, who graciously invited the travelers into their homes and marketplaces. 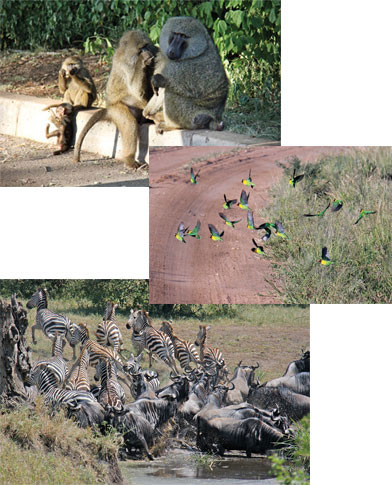 TOP: In the parking lot of one national park, John spotted four baboons in the middle of their morning grooming ritual. "The family walked within three feet of me," he says. "It was a magical moment, because I felt that the baboons accepted me; I was not threatening them." MIDDLE: Tanzania is a bird-watcher´s paradise. Its 1,000 different species include the colorfully named and visually stunning blue-cheeked bee eater, yellow-collared love birds (pictured), and lilac-breasted roller. BOTTOM: The safari vehicle came to a halt when a group of zebras (technically known as a dazzle) dashed across the dirt road toward a watering hole. Shortly after, some 300 wildebeest forced the zebras out—and so began a 15-minute back-and-forth struggle over the precious water.

A passionate amateur photographer, John has also visited Italy, Vietnam, and China through the Iowa Voyagers, but he formed a special kinship with the people and wildlife in Africa. Even though the tour took place almost two years ago, John simply has to scroll through his online photo galleries to be transported back to one of the most memorable experiences of his life. "The trip was extremely affordable and dirt-cheap for what was provided," he says. "We would've paid four times as much, because every day was wonderful."

Traversing the vast grasslands of Tanzania, John began to feel his own significance shrink as his travels brought him a broader perspective of the world. "All I do is look at a photo, and it's like I'm back on safari," he says. "I saw things, did things, and photographed wildlife that I could never have done anywhere else in the world."

Here's a snapshot of some of the Balzers' close encounters with nature on the Iowa Voyagers' African safari. 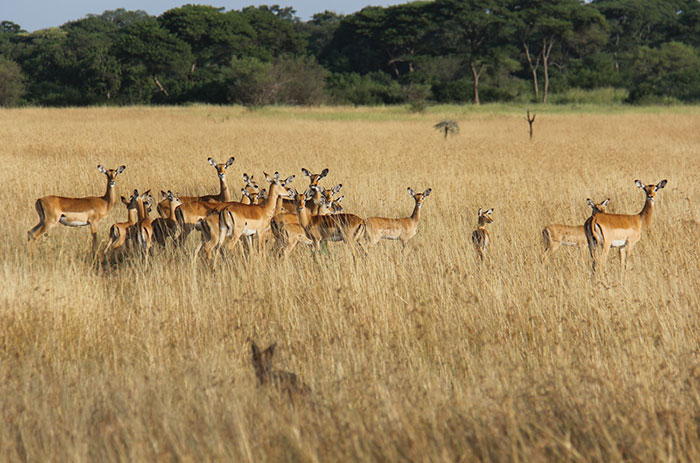 ON HIGH ALERT: The struggles of daily life for animals in the western Serengeti became evident one day as the safari vehicle paused to watch this grazing herd of impala. The predominantly female group of animals suddenly stopped, raised their heads, and gazed in the same direction. Hidden in the tall grasses, a hungry black-backed jackal looked for an easy meal. As the jackal crept closer, the mature impalas shielded vulnerable youngsters. They stood stone still, only moving their eyes and twitching their noses to keep track of the predator. When the threat became too much to bear, the herd erupted into a frenzied stampede to safety. 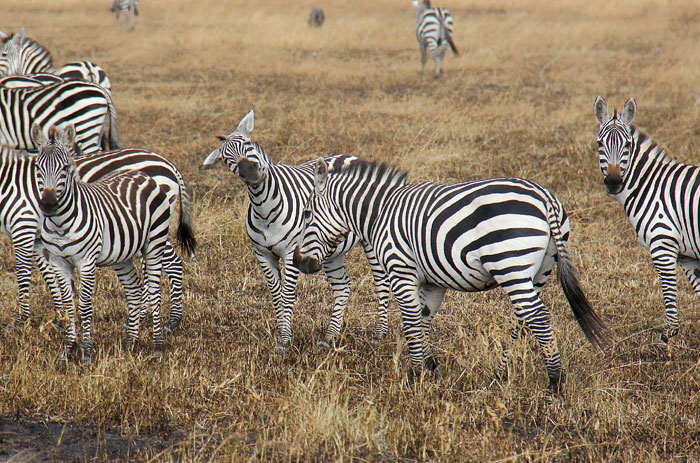 PLEXED ZEBRA: While most animals seemed indifferent to the safari vehicle's presence, this zebra tilted its head in curiosity at the sound of John's camera's shutter release. John took advantage of his Canon 60D's 18-200mm lens and sports setting to capture the personality of the animals he encountered. 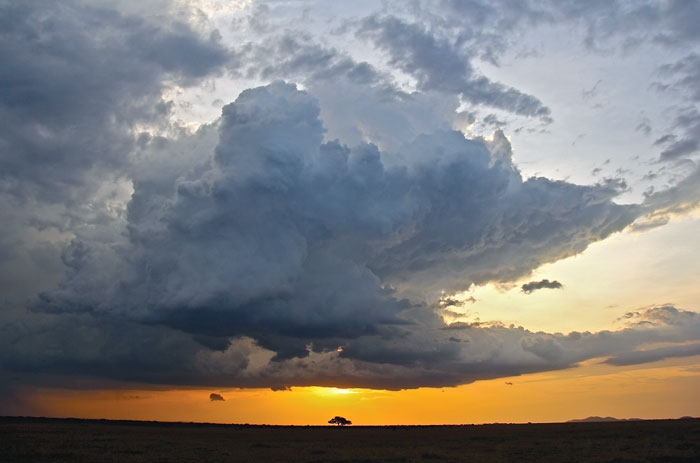 SUNSET ON THE SERENGETI 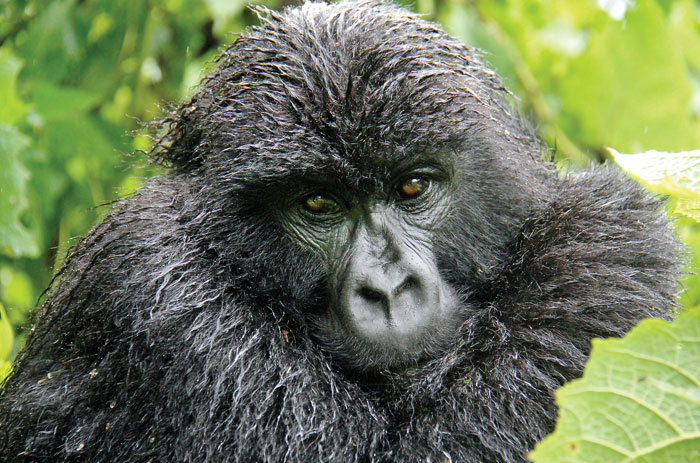 PRIMATE MODEL: On a trek through Volcanoes National Park in Rwanda, John formed a bond with this female gorilla that posed for his photos. "In a past life, she must've been a model, because she did what I told her to do," he says. "The guide had never seen that happen before." 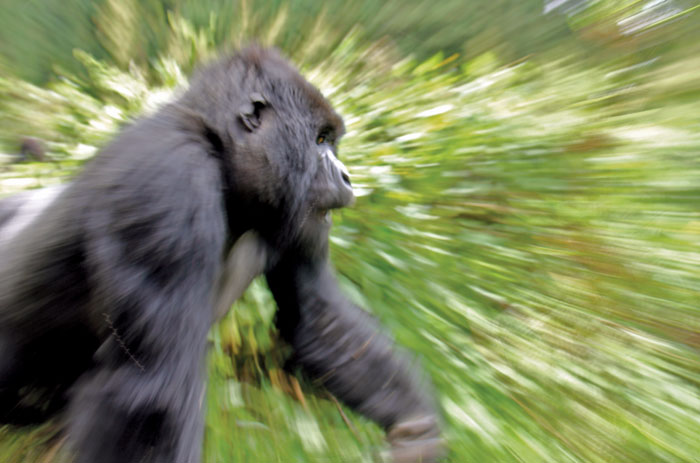 CLOSE CALL: The trip extension to Rwanda offered the Balzers a rare opportunity to see the endangered mountain gorilla, of which only 800 remain in the wild. A guide used a machete to forge a path through the jungle, warning the group that primates may use the same trail. When this silverback gorilla snuck up behind John, he tried to follow the guide's instructions to move aside, avoid eye contact, and stand still. Unfortunately, he lost his balance on some slippery vines—resulting in this unusual "action" shot. 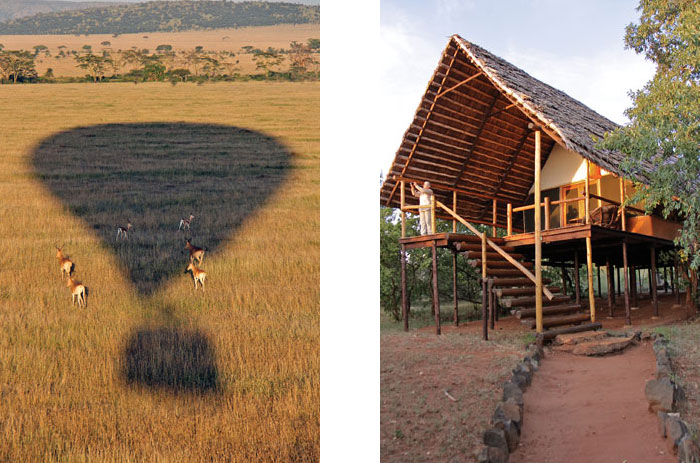 LEFT: At sunrise one day, travelers climbed into the basket of a hot air balloon and lifted off into the sky for breathtaking views of the Serengeti. John overcame his fear of heights to marvel at the sight of the balloon's shadow across the African plains. Startled by sight of the floating balloon and the roar of the hot air burner, zebras took off running, a male elephant prepared to protect its herd, and anxiety-ridden hippos circled in the water. The balloon landed in time for a buffet brunch and champagne toast out in the bush. RIGHT: Although the Balzers stayed in deluxe tented camps and lodges throughout the trip, life in the wilderness meant occasional periods without running water and electricity. Still, the thrill of this once-in-a-lifetime experience outweighed such minor inconveniences. The Balzers will never forget sitting on a porch overlooking the tranquil valley one evening and hearing a noise like a dog barking. To their amazement, they discovered that the bizarre sound actually emanated from a zebra. 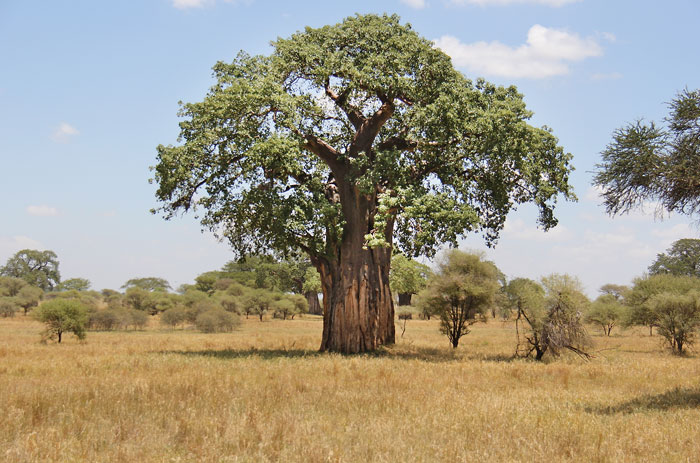 TRANQUIL TREESCAPE: The biodiversity of Tanzania extends beyond the wildlife to its assortment of trees, including this acacia in Tarangire National Park. Giraffes feed off the leaves of the acacia, while the thick-trunked baobab tree attracts elephants, monkeys, and baboons with its intoxicating fruit.

The People of East Africa 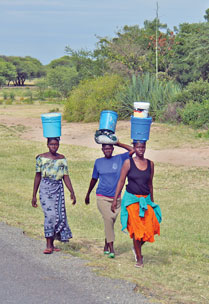 On his memorable trip, John Balzer often turned his lens toward the people of East Africa, who happily welcomed the Iowa Voyagers group into their communities.

While in Rwanda, the Voyagers visited a memorial museum that showed the lasting impact of the 1994 civil war between the Hutu and Tutsi tribes. About 20 percent of the country's population—including 70 percent of the Tutsi minority—died during the genocide. The tour guide shared personal stories of loved ones lost and explained how the two groups have worked together over the past two decades to seek justice and reconciliation, and help the country recover from its tragic history. 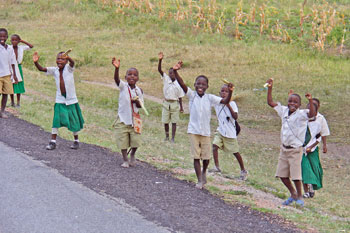 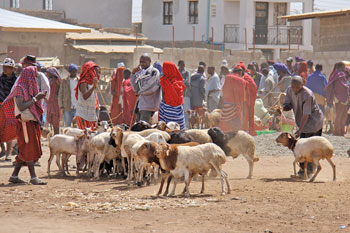 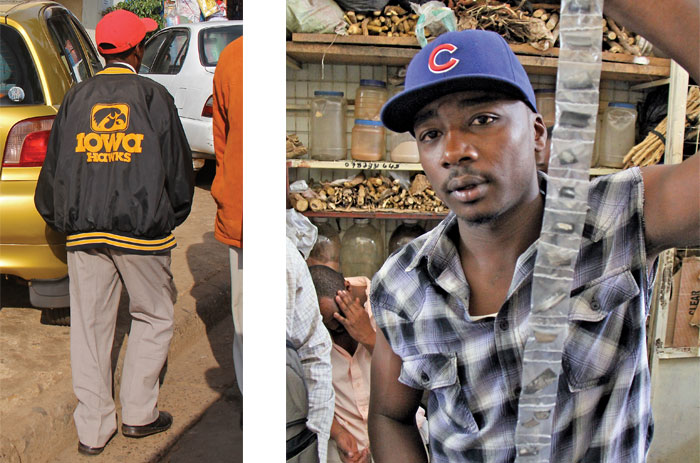 LEFT: While walking the streets of Kigali, the capital of Rwanda, John learned that Hawkeye spirit truly transcends borders. RIGHT: This self-professed witch doctor wearing a Cubs cap convinced John to buy a snake bite antidote, which he now uses as a conversation piece in his home in Bolingbrook, Illinois.

Travelers also encountered a range of human experiences while in Tanzania. In the marketplaces, they saw mothers carry babies on their backs and large urns for water on their heads. At a rural school, they watched a performance by grateful children who wouldn't be able to attend without the generosity of previous tourists. They also witnessed widespread poverty and harsh living conditions, including people drinking out of the same lake where others had urinated and bathed. Water isn't readily available to the nomadic Masai people, who sell crafts to be able to pay $300 a week for the precious resource to be delivered by truck to their remote villages.

"From start to finish, the trip was nonstop education and cultural enrichment," says John. "The only way to know and understand other people is to be immersed in their culture, and we saw a cross-section of how the locals live and work."

For more of John Balzer's photographs from the safari and other tours, visit www.johnebalzerphotography.com