View All From You
Share
IOWA Alumni Magazine | February 2015
Voices from the Past
By Shelbi Thomas
Crowdsourcing brings valuable history from the UI Libraries' collection into the hands of the public.

More than 150 years have passed since soldier Oliver Boardman wrote a series of letters to his family in Monroe County, Iowa, from the frontlines of the Civil War. Yet when John F. Pfiffner, a retired architect from Cedar Rapids, recently transcribed nearly 300 pages of Boardman's personal accounts of the Battle of Shiloh, Siege of Vicksburg, and other major historical events, the soldier's story became fresh again.

"Without warning, I came to the letter from his company commander notifying Boardman's father that his son had been killed in action," says Pfiffner. "Because I had worked on his correspondence for several weeks and had become familiar with the man, I felt like I had lost a member of the family."

Pfiffner is one of thousands of volunteers involved in the UI Libraries' Do It Yourself (DIY) History project, in which old handwritten manuscripts once locked away in the university's archives and special collections are being transcribed digitally through crowdsourcing, making the stories of everyday people from the past accessible and searchable online for future generations. The project allows history to be told from multiple perspectives, rather than solely through the lens of famous figures.

Jen Wolfe, a former UI digital scholarship librarian who helped lead the project, says, "Since the libraries put its first batch of Civil War diaries up, [volunteers] have fought a brave battle against inaccessibility and illegibility, rescuing the firsthand accounts of soldiers, cooks, students, railroad barons, farmers, artists, suffragists, and so many others."

Anyone can participate in the UI Libraries' DIY History project by logging into the free site (http://diyhistory.lib.uiowa.edu) and choosing a scanned page of history to transcribe into a text box and save for the next person to review and continue. Library staff then check the submissions for accuracy. With transcriptions now available for many of the images, documents that once collected dust in family basements and attics have become valuable resources for researchers. Crowdsourcing also alleviates the workload for the UI librarians and archivists, who can concentrate on preserving and preparing more materials to be available online.

The UI Libraries' foray into crowdsourcing transcription began in 2011 in commemoration of the Civil War's sesquicentennial. Librarians scanned and posted around 15,000 pages from Iowans' diaries and letters written in the 1860s and invited the public to transcribe. Since crowdsourcing transcription was still a new concept at the time, they weren't sure what to expect. In fact, for the first month, the site received only a few dozen submissions. Then, in June 2011, an American Historical Association blog entry about the project appeared on the social media site Reddit. Eager users logged onto the DIY History site, temporarily crashing it with 30 times its normal weekly traffic.

Since that success, the UI Libraries have enlisted the public's help with other projects, including a historic collection of cookbooks; World War I and World War II letters and diaries; documents from the lives of Iowa women and pioneers; papers on the building of the Transcontinental Railroad; and the collection of Hawkeye football legend Nile Kinnick, 40BA.

While libraries traditionally preserved materials by locking them away where only the most dedicated researchers are likely to access them, digitizing these resources invites the masses to take part in their conservation and dissemination. The subsequent sharing of these projects on Facebook, Twitter, and Tumblr has helped catapult the UI Libraries to social media stardom. DIY History recently reached an important milestone of 50,000 transcriptions after high-profile authors Kate Beaton (Hark! A Vagrant) and John Green (The Fault in Our Stars) promoted the site on their Tumblr accounts. 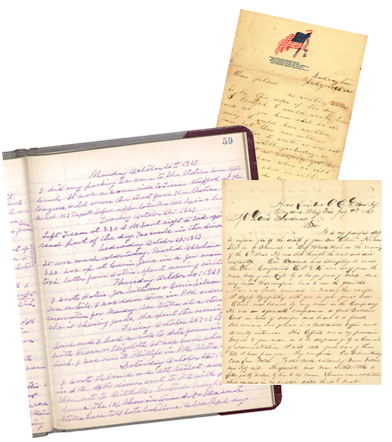 From left to right: Iowa Byington Reed's diary entry from Black Tuesday during the Depression, a letter informing a father of his son's death in the Civil War, and correspondence from a newly enlisted Union soldier.

Huge spikes in traffic also followed an NBC story on crowdsourcing and a Buzzfeed article this past fall on "13 Things For History Lovers To Do Online When They're Bored." In its review of the Iowa Women's Lives collection, Buzzfeed raved, "If you ever want to read someone's diary, now you can actually do it for a good cause."

Matthew Butler, 01MA, 03MFA, the lead developer and current project manager for the DIY History site, says it's not only the crowdsourcing, but the content that drives interest. "The UI has been one of the bigger players in the field of crowdsourcing transcriptions, because we had the right idea and material at the right time," he says. "The personal stories unlocked by transcription are always going to be the bread and butter of our site."

In fact, the UI's approach has been adapted by other libraries and research institutes around the world. After the university released the computer code, organizations such as the Newberry Library, Oxford University Museum of National History, Oregon State University Libraries, Beloit College, the Library of Virginia, and Yale University created their own versions of DIY History. In recognition of her contributions, Wolfe received the Center for Research Libraries' 2013 Award for Access for spearheading a project that opened up the practice of history to everyone.

Indeed, DIY History is used as a learning tool in UI classrooms through the IDEAL (Iowa Digital Engagement and Learning) "Archives Alive" project. Four weeks each semester, rhetoric students transcribe material from the site, conduct background research, analyze rhetorical devices used in the writing, and make presentations that are uploaded to YouTube (http://tinyurl.com/ma4bg43).

Along the way, students discover some of the greater challenges of transcription. Handwriting samples vary from chicken-scratch to flowery penmanship and from barely literate to pristine English. Certain types of ink also corrode with time, rendering some handwriting virtually illegible. To assist transcribers, the DIY History site provides users with tips that include a list of archaic terms and measuring units, as well as common Civil War abbreviations and misspellings. So far, the UI Libraries reports a high accuracy rate, thanks to a cumulative editing and checking process similar to Wikipedia's approach.

While thousands of people have visited the site, some 50 "power users" do most of the transcription. Greg Prickman, head of UI Special Collections and University Archives, says, "Some volunteers start by doing just one page, then they do another, and before they know it they're up all night."

One star transcriber stumbled across the site by accident. Dave Hesketh, a retired shipping manager and amateur historian in northwest England, was searching online for the English Civil War when he came across the UI's American Civil War collection. Since then, he's transcribed more than 700 pages and even enlisted the help of a friend with a Ph.D. in military history.

David Davenport, a retired history professor from Fresno, California, is another power user who first encountered the project through his interest in the Civil War. After completing some Civil War transcriptions, Davenport decided to explore the diary of Iowa Byington Reed, an Iowa City woman who wrote about her life nearly every day from 1872 to 1936. Through reading about Reed's long, exhausting hours devoted to household chores and her heartbreak after her husband's death, Davenport felt a greater connection to and admiration for his female ancestors of that same time period. 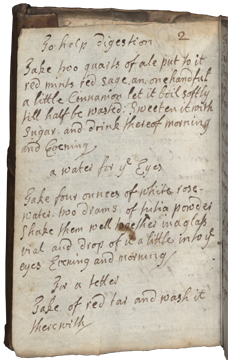 In addition to culinary recipes, the Szathmary collection also highlights medicinal concoctions, such as this recipe to aid digestion.

Davenport's personal connection is reflective of the sentiments felt by many users, who rave about the site to the UI Libraries staff. "Best thing ever," one transcriber said. "Will be my new guilty pleasure...that I don't even need to feel that guilty about." Another user entrusted her great-great-great-grandfather's Civil War papers to the university after a positive experience with the site.

Most recently, librarians have begun to digitize 10,000 science fiction fanzines from the James L. "Rusty" Hevelin Collection, which features writers such as Ray Bradbury, Roger Ebert, and George R.R. Martin. Because some of the material is sensitive or copyrighted, the collection will only be available to selected users in order to build a searchable index of the fanzines' contents. Future collections may include maps, photos, oral histories, and films, as well as medical books and other treasures from the UI's rare book room.

University librarians and archivists still marvel at how a relatively low-tech site generated unprecedented enthusiasm and interest around the world—and became one of the UI Libraries' most collaborative and successful educational outreach efforts. "I'm blown away by the level of engagement with the material," says Butler. "It's a dream come true for librarians."

To help preserve and tell the story of Iowa, the UI Libraries actively seeks to expand its collections of historically significant papers, photographs, and other documents from such time periods as the Civil War, World War I, and World War II. Anyone interested in donating a collection may contact Special Collections and University Archives at lib-spec@uiowa.edu or 319-335-5921.