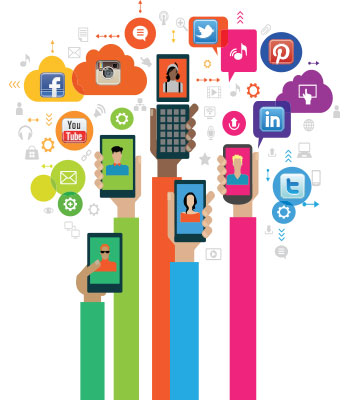 Though the term "social media" had yet to be coined, the concept existed in primitive form. Most people had email, the first tool to use the Internet for instantaneous communication. Craigslist was available for want ads, YouTube appealed to amateur movie makers, and the truly hip had their own page on MySpace.

Still, the idea of social media was largely unknown a decade ago. Nobody knew what to do with YouTube in those early months other than populate it with cat videos. Facebook was still "TheFacebook" and Mark Zuckerberg was busy collecting the venture capital he needed to move beyond Harvard. Twitter would not appear on the scene until 2007, with Instagram and Pinterest following in 2010.

But in that short span of time, social media has rewritten how we live our lives; receive our news; buy, sell, and are sold things; and keep in touch with each other. To take a scholarly look at how social media has touched and forever altered just about every aspect of modern society, the School of Journalism and Mass Communication in the College of Liberal Arts and Sciences offers "Social Media Today."

"It's a media literacy course for the digital age," says Brian Ekdale, one of the course's instructors and an assistant professor of journalism and mass communication. "When you look back at how much things have changed in ten years, and how quickly we've adapted to those changes, we [should take] the time to step back and see the implications."

One year after Facebook went national in 2008, about 278 million users had a social media account. By 2013, that number soared past two billion and continues to grow with everyone from Ellen DeGeneres to Pope Francis now owning a Twitter handle. Much of the exponential growth has technology to thank: just as social media platforms were being developed, hand-held device companies rolled out easier, portable ways to access them anytime, anywhere.

"It's hard to imagine ourselves functioning without our technology," says Sujatha Sosale, associate professor of journalism and mass communication who also teaches the UI course. "It's almost a psychological extension of ourselves. We are becoming so dependent on it."

"It's almost a psychological extension of ourselves. We are becoming so dependent on it."
-Sujatha Sosale

Anyone who considers a "like" on Facebook comparable to a dopamine hit knows Sosale speaks the truth. "Social Media Today" explores ideas like this, as well as how the phenomenon affects journalism, politics, health care, entertainment, career development, community, business, and relationships. Throughout the semester, students consider social media's influence in these areas and on their own identities and lives, which may never know a reality without it.

First offered in 2012, the course begins with a prehistory of social media, applying a very broad definition to its earliest days in the coffee houses of 1660s London. The cafés of Vienna in the 1890s, "wanted" posters from the Wild West, the drawings on the Caves of Lascaux—all were methods for people to share ideas and information quickly and easily—if not always elegantly or artistically. Mostly, though, the course focuses on social media's rapid evolution since 2005.

Like any powerful and widespread tool, social media brings both drawbacks and benefits. Students discuss the pluses: its ability to renew old friendships and create new ones, learn about new books and movies, read thought-provoking commentary on current events, do business, and help people find jobs or save money. In some cases, social media can be used to save lives—it can facilitate organ donation for patients in need or spread the word about a missing child within minutes. It can bring people together in times of crisis and it can serve as an outlet for shared grief or joy.

They also spend time on the dark side, which can be quite sinister. Despite all its positives, social media can be used to stalk, harass, and bully. Emboldened by anonymity, people behave in ways they normally would not, and their online discourse often degenerates into unabashed cruelty. Social media can also facilitate identity theft, violate privacy, and leave an eternal footprint that may haunt relationships and job interviews in the future.

Course participant Peter Kim took that lesson to heart. "I adjusted my privacy settings and made sure my professional social media pages were on the top of the Google search," says Kim, a cinema and journalism major and human relations minor from Seoul, South Korea. "And I got into the habit of filtering my posts on Facebook. I became more cautious when I posted content."

In a professional branding assignment, students like Kim are charged with evaluating their online brand and considering how they might create a professional LinkedIn image that will help them score an ideal job. Other papers and presentations throughout the semester require students to analyze and interpret information posted on social media.

On an international and political scale, students might write papers on the ways social media has shaped the outcome of global events. A revolt in Tunisia turned into the Arab Spring in part because Tunisians used Twitter and other social media sites to inform the world of their plight. President Barack Obama's victory in the 2008 election was credited partially to his campaign's innovative use of social media to energize younger voters. (Obama became the first sitting president to adopt @POTUS with the description: Dad, husband, and 44th President of the United States. He currently has 3.11 million Twitter followers.) More recently, social media showed its speed and strength as a forum for advocacy and demonstration when Facebook shares after the Supreme Court's ruling in support of same-sex marriage turned the platform into a rainbow.

Ekdale says social media fills a craving for human connection, even if it's online and sometimes at the expense of face-to-face reality. Most college-aged young people are well aware how social media has transformed the way they find their mates. Students of yore were forced to meet their love interests at the Iowa Memorial Union sock-hop; today, apps like The League make it easier for people to find potential romantic partners with mutual interests—without having to put on socks or leave the house. Commercial companies consider social media a game-changing treasure trove because marketers can tailor their sales pitch to a potential customer's profile. Selling merchandise may be easier, but social media has no doubt made it harder to...ooh, look at the video of that cat jumping out of the box! That's so adorable.

What? Oh, yeah...it's made it harder to stay focused. One afternoon as Sosale led her section, several students stared down at tiny screens to check their Facebook, Twitter, or Tinder. This irony is not lost on the professor, who redirects her class to keep focused on learning.

Journalism major Emily Neff says she found the class "eye-opening," especially as it applies to her chosen profession. Reporters no longer do their jobs without social media. They're expected to live-tweet the city council meeting, write listicles and clickbait headlines, post instant cell phone photos of a fire or crime scene to Instagram—tools that Woodward and Bernstein never could've imagined.

"I thought social media was just posting status updates to Facebook, but it's so much more than that," says Neff. "I changed my expectations for my career after the class when I saw the potential in how it's changing journalism."

The fact is social media has become so ubiquitous that there's no longer an opt-out. If a friend takes a photo of you and puts it on her Instagram: boom. You are now on social media, even if you don't have an account. "Or if you apply for a job and have no LinkedIn profile, that says something about you that a potential employer may not like," says Sosale.

The challenge of teaching a class about social media is the instability of social media itself, as new technologies, companies, and apps constantly rewrite the rules. Friendster is long gone as a social sharing site. Flickr dominated photo sharing until Instagram came along. MySpace was the first social media site to achieve mass popularity—but was so thoroughly crushed by Facebook that not even Justin Timberlake could save it.

"When you teach the Civil War, it's going to look the same in two years," says Ekdale, who is most active on Twitter. "That's not going to be the case with social media, and sometimes, the students are ahead of me. I didn't know what Yik Yak was until they told me about it."

He's updating the syllabus as we speak.