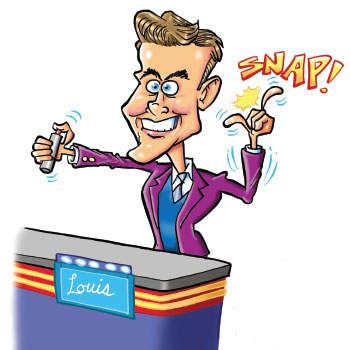 a contestant on Jeopardy this past spring, pop culture journalist and comic Louis Virtel, 08BA, delivered the snap heard 'round the world. Upon correctly identifying The Crucible as Arthur Miller's play about 1690s Salem, Virtel celebrated with a sassy victory snap that became an online meme. A few weeks later, fellow UI journalism alumnus-turned-Jeopardy contestant Choyon Manjrekar, 05BA, set the Internet ablaze with his tongue-in-cheek wrong answer to a question about a Broadway musical that shares its name with a hymn (he guessed Kinky Boots instead of Rock of Ages).