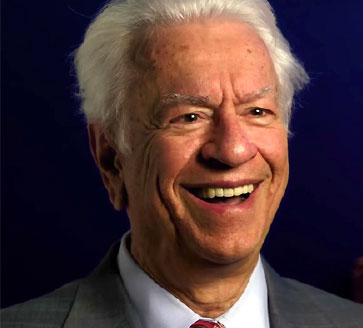 Stamatios "Tom" Krimigis — the only scientist in the world who has built instruments for space missions to all planets in the solar system—says coming to the University of Iowa to study with James Van Allen, 36MS, 39PhD, was the "best thing I ever did."

Krimigis, 63MS, 65PhD, recently followed in his mentor's footsteps to receive a 2015 lifetime achievement trophy from the Smithsonian National Air and Space Museum in Washington, DC. The principal staff scientist and emeritus head of the Johns Hopkins University Applied Physics Laboratory says, "I feel lucky for my time in Iowa City and my association with James Van Allen, whose leadership and vision helped shape my career."

In 1961—in the heat of the Space Race competition between the Soviet Union and United States—Van Allen recruited Krimigis to become a UI grad student. Van Allen challenged Krimigis to design a detector for the first mission to Mars, and together they worked on Mariners 4 and 5. These missions revealed that—unlike Earth—Mars and Venus don't have Van Allen radiation belts to protect them from inhospitable space radiation and solar wind.

Since graduating from Iowa with his Ph.D. in 1965 and serving for two years as a UI assistant professor, Krimigis has spent more than four decades at Johns Hopkins, Van Allen's alma mater, where he has designed, built, tested, and launched satellites and other instruments for various space missions.

The Smithsonian award recognizes Krimigis's early discoveries about solar wind and the magnetospheres of the planets, his role in establishing the NASA Discovery program to reduce the cost of planetary exploration as head of the Applied Physics Laboratory's space department, and his leadership in dozens of space voyages. J.R. "Jack" Dailey, director of the Smithsonian National Air and Space Museum, says, "Few individuals have contributed more significantly to our knowledge of the solar system in a single career."

Krimigis is perhaps most proud of his work on Voyagers 1 and 2, which have traveled further from Earth than any other spacecraft. Originally launched in 1977 to observe Jupiter and Saturn, Voyager 1 recently crossed into the previously unexplored territory of interstellar space.

Still true to his Iowa ties, Krimigis works with UI professor Don Gurnett, 62BSEE, 63MS, 65PhD, to analyze data from the Voyagers and Cassini missions. He also has instruments on spacecraft currently investigating Mercury and Pluto, but is most excited about a solar probe that will go within six-million kilometers of the sun in July 2018. Says Krimigis, "We have a wondrous world and universe, and we will never cease to explore it."