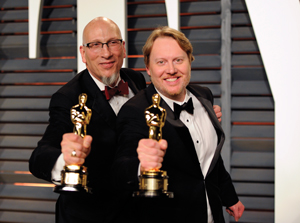 After 20 years of creating happy endings for Disney animated characters, Don Hall finally received his turn at a magical evening. Hall, 91BFA, accepted his first Academy Award this past February as co-director of Big Hero 6. The superhero movie about a robotics genius and his inflatable robot grossed more than $546 million at the box office and earned the trophy for best animated feature. An animator with the Disney company since 1995, Hall holds fond memories of reading Marvel comics as a kid and always wanted to turn a comic book into an animated film. Working with the Disney-owned Marvel Entertainment, he decided to adapt an obscure 1990s-era comic book drawn in the style of Japanese manga. For three-and-a-half years, Hall oversaw all aspects of the movie. "My main job as a director is to harness all the talent, so that everyone has their voice heard," he says. "At Disney, we're surrounded by and listen to the best artists in the world." While accepting the Oscar for the film, the Glenwood, Iowa, native delivered one of the ceremony's most touching tributes. "Once upon a time there was a freckle-faced little boy who told his mom and his dad that one day he was going to work at Walt Disney Animation, and they did something amazing: They supported him and believed in him," Hall said. "And from the bottom of his heart, he thanks them."

What are his other notable projects?

Hall's aspirations to work for Disney developed at an early age. He studied the history of animation and made his first films on an Oxbury animation camera while studying drawing and painting at the UI in the late '80s. After graduating with his bachelor of fine arts degree in 1991, Hall moved westward to earn a degree from the California Institute of the Arts in 1995 and take a job with his favorite company.

Hall became a story artist for Disney animated movies such as Tarzan (1999), The Emperor's New Groove (2000), and Chicken Little (2005). He also served as head of story for Meet the Robinsons (2007) and The Princess and the Frog (2009). In 2011, Hall made his directorial debut with Winnie the Pooh before taking on Big Hero 6 three years later—an experience that allowed him to "live out his dream every day."

Though fans are already pining for a Big Hero sequel, Hall doesn't know yet what's in store for the franchise. He plans to storyboard for a couple months, spend the summer traveling with his wife and kids, and return to the studio in the fall with ideas for his next feature film. In the meantime, Hall needs to find a safe place to display his Academy Award. "The day after the Oscars, we caught our eight-year-old son putting it in his book bag," says Hall, who foiled this plan but later surprised children at the school with a memorable show-and-tell session featuring the golden trophy.