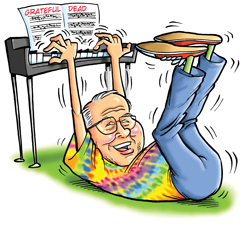 At age 65, Chris Johnson still knows how to rock. While he's all business during the day as a UI ophthalmology and visual sciences professor, Johnson tickles the ivories throughout the year as part of Winterland—a six-member band dedicated to Grateful Dead music. The gig is perfect for the keyboardist, who himself opened for the Grateful Dead as a college student in the '60s. Then part of a peculiarly named rock group, Hercules and the Chicken Fat People, Johnson warmed up the crowd with his signature move—a blind keyboard solo played lying on the ground, hands overhead and feet in the air—which he continues to perform today. Here, Johnson shares five ways to command the stage: