View All From You
Share
IOWA Alumni Magazine | June 2014
End of An Era
By UIAA Staff
After more than a quarter-century, the UIAA's popular president retires. 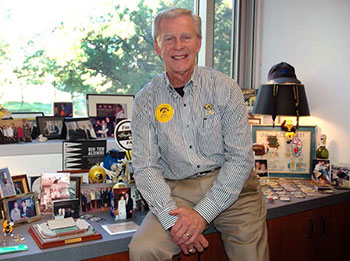 In every corner of this office, Hawkeye memorabilia abounds—pennants, buttons, holiday ornaments, Kinnick Stadium posters, and tickets from Iowa football bowl games. Black-and-gold beads hang from a University of Iowa table lamp. The Reflections photography book of campus takes pride of place on a table.

Although he spent 20 years at Drake University in Des Moines, as a student, faculty member, and eventually director of alumni relations, Nelson has devoted the bulk of his career to the University of Iowa. When he retires next month, he can look back with pride on a career full of notable achievements on behalf of the UI and its alumni.

Growing up on a farm near Clarinda in southwest Iowa, Nelson always rooted for the Hawkeyes and relished trips to Iowa City to see his favorite football team in action. He moved to Iowa City permanently in January 1988, when he joined the UIAA as associate executive director to help launch IOWA Clubs and oversee reunions, the Iowa Voyagers travel program, Alumni Band, and the Distinguished Alumni Awards.

In 1997, Nelson was appointed executive director at the UIAA, following an 18-month stint as interim executive director. Announcing his appointment, UI President Mary Sue Coleman paid tribute to Nelson as "an enthusiastic and innovative leader." Since then, Nelson has cultivated transformative projects and developments that put the UIAA on a solid financial and professional footing.

When he joined the UIAA, IOWA Clubs did not exist, but within months Nelson had helped establish several in Iowa and another five in Chicago, Oakbrook, Kansas City, St. Louis, and Minneapolis/St. Paul. Today, IOWA Clubs—one of the most visible and popular UIAA programs—help spread and celebrate the Hawkeye spirit in 53 cities across the U.S. and in 15 international locations. Nelson visits many of them, as he regularly travels all over the country to attend alumni association events or UI Nights with President Sally Mason. With his warmth and self-deprecating style, he's a popular figure at those events and back home in Iowa. Whether at meetings on campus, the UIAA Members' Tailgate, the UI booth at the Iowa State Fair, or the annual Distinguished Alumni Awards ceremony, Nelson has a smile, a wave, and a cheery greeting for all the people he meets—and he invariably remembers their names.

In 2001, Nelson's title changed from executive director to president. In his time at the UIAA, Nelson watched the organization's annual budget grow from $2.1 million to $3.3 million, the number of staff increase from 18 to 27, and membership rise from 38,000 to a high of 52,000. Other major initiatives during his tenure include the credit card and affinity programs, which provide critical funding to the UIAA, he implementation of a strategic planning process, the development of electronic communications and social media, and the move to a new alumni records database.

When he looks back at his years at the UI, though, Nelson doesn't focus on those kind of achievements. Instead, as a true "people person," he remembers relationships. "The best part of my job has been the friendships I've made with alumni, staff, faculty, students, and members of the UIAA board of directors," he says. "I have lots of great memories. And when I leave, that's what I'll miss the most: the people."

Nelson officially retires on July 3, but he will likely remain at the UIAA on an interim basis until the new president comes on board (at the time of this article, final interviews were being held on campus). So far, he has no definite plans for retirement. Other than traveling, playing golf, and spending more time with his wife, Pam, Nelson simply looks forward to the freedom of a flexible schedule. If he wants to take his time reading the morning newspaper over a cup of coffee, he can do so—although, as befits a former farm kid, he'll likely continue to rise before dawn.

With his glass-half-full attitude, Nelson often starts a sentence with, "We're so blessed...." After 26 years of Nelson's dedicated service, the University of Iowa and its alumni association can truly count their blessings for his outstanding leadership.

Says President Mason, "Vince Nelson has been the key player in the success of the UIAA for so many wonderful years, and he has been a crucial partner to me in advancing this great university. I can't think of too many other people who match Vince's passion as a Hawkeye booster. We will all miss Vince's dedication, his enthusiasm, his humor, and his boundless positive energy, but we are fortunate that he has left such a great legacy for the next leader of the alumni association. I thank him for his many years of leadership and tireless commitment. Vince, this one's for you.... 'Go, Hawks!'"