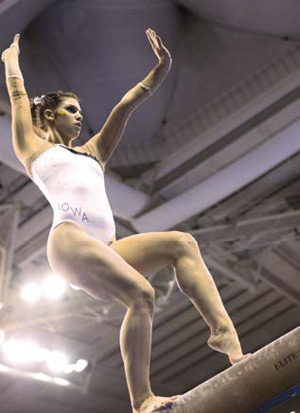 PHOTO: ATHLETIC COMMUNICATIONS Requiring a rare combination of flexibility and strength, gymnastics has always been a challenging sport to master. UI junior Emma Willis continues to exercise those skillsmentally, rather than physically—after an injury forced her to forge a new life outside of competition.

A gymnast since age two, Emma Willis has spent so much time hanging from uneven bars that she's used to seeing the world upside-down. But a lifetime of training to become one of the sport's elite couldn't prepare the UI junior for a recent injury that turned her world on its head.

Willis joined the Canada National Team at age 11, representing her country in international competitions like the Pan American Games and World Championships. With an eye on the Olympics, Willis considered taking time off high school to train full-time, but a series of injuries to her elbows and knees dashed her hopes. She was devastated, but the sense of accomplishment and joy she gained from performing helped her push forward. "I loved the sport too much to quit," she says.

Already familiar with Hawkeye head coach and fellow Canadian Larissa Libby, Willis decided Iowa was the ideal place to make the switch to collegiate competition. Indeed, the journalism major soared to success as a 2012 Big Ten Freshman of the Week, competed in every meet in the all-around, and became the team's leading vaulter. Yet by her sophomore year, she'd torn the meniscus cartilages in her knee again.

Gymnastics may look elegant and effortless, but it's a grueling endeavor potentially as risky as aggressive contact sports such as football or hockey. Gymnasts frequently suffer bruises, sprains, and stress fractures, while complicated stunts can result in severe traumatic injuries. Years of training 20-25 hours each week caused irreversible wear and tear on Willis' joints. Plus, Willis knew she was fighting against the clock, with most gymnasts reaching their peak at age 14—already considered past their prime at 16 when eligible to compete at the Olympics.

Although Willis took the summer off to allow her legs to heal, her condition didn't improve. She clearly remembers August 21, 2013—the day a doctor told her she had to walk away from her first love. "I knew it was coming," she says, "but you can't prepare to hear you'll have to stop something you've committed years to."

At age 21, Willis bears the scars from eight surgeries—more than most people have in a lifetime. Two operations on her elbow, two on her left knee, and four on her right knee had already taken a toll on her body and mind—but it was the latest meniscus transplant on her right knee that forced her into retirement. She officially made the announcement this past January on Twitter. "I had to think, 'Is it worth it to be in pain competing for two more years, or to see myself at 30, still able to run and walk?'" she says. "Gymnastics is wonderful, but not worth killing my future for."

Unable to compete with the Hawkeyes, Willis found a new way to contribute as the team's administrative assistant. She still travels with the team, offering her support as the program's No. 1 fan. Though unsure what the future holds, Willis believes gymnastics will always be a part of her life.

"I struggled with re-finding my identity, because for so long I was a gymnast," says Willis, who underwent her final knee surgery last month. "I'm still soul-searching; I spent 19 years in gymnastics, so it's not going to take 19 minutes to get over it."