View All From You
Share
IOWA Alumni Magazine | October 2013
The Future of Film
By Shelbi Thomas
In the age of Netflix, Redbox, and online streaming films, do people still go to the movies? Jesse Kreitzer, executive director of the UI's Bijou Film Board, believes nothing beats the experience of watching an independent film on the big-screen surrounded by fellow movie aficionados. 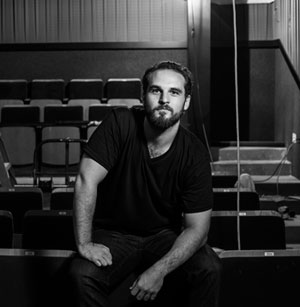 Here, the filmmaker, M.F.A. candidate, and teaching assistant in the cinema and comparative literature department explains the benefits that Iowa City will reap from the Bijou's new partnership with the nonprofit theater FilmScene and why conditions are ripe for microcinemas—small movie theaters that screen independent films—to flourish nationwide.

But, didn't the Bijou just close?

Since 1972, the Bijou has built its reputation as one of the nation's top studentrun theaters. And while we did close our location in the Iowa Memorial Union this summer, the final credits aren't rolling. Our reach will only grow through a partnership with FilmScene, a local nonprofit dedicated to showcasing independent and international films in the heart of downtown.

While the Bijou has always served both the UI student body and the larger community, it was difficult to attract new patrons in our former location. We're confident that our new space shared with FilmScene—in the former Vito's building on the Ped Mall—will serve the community better. FilmScene will cover the day-today operational expenses, so the Bijou can use its budget to bring in more filmmakers and other guest speakers. When it opens this month, the space will become a hub for the arts, where movie fans can meet for inspired dialogue, special programming, and filmmaking workshops in our lobby, café, or on the rooftop patio.

What is independent cinema?

Independent cinema is a slippery term, but it's defined as any film made outside of the studio system; such a small fraction of the films produced each year come from Hollywood. Chances are everyone has seen an independent film, which includes everything from obscure foreign productions to Oscar favorites such as The King's Speech and Beasts of the Southern Wild.

Why is it important?

Advancements in digital technology have made filmmaking more democratic and accessible than in the past, and the Internet provides more avenues for filmmakers to distribute their films and reach their target viewers. While studio productions with massive budgets often pander to a general audience, independent films have more freedom to tell rich and compelling stories about the human condition. They also break conventions in filmmaking, finding progressive ways of storytelling that are later adopted by Hollywood.

Similarly, microcinemas offer something different, a more intimate setting where people can watch smaller films together. Locally, 793 donors showed their support for the arts by donating $91,000 to FilmScene in a crowdfunding campaign. Specialized movie theaters like the Bijou/FilmScene space have popped up in many metropolitan areas due to audience demand, strengthening community bonds and adding to the cultural vibrancy of a city.

For more information on Iowa City's newest movie theater, visit the Bijou at http://bijou.uiowa.edu or FilmScene at www.icfilmscene.org.