View All From You
Share
IOWA Alumni Magazine | June 2013
From Print to Digital
By Tom Snee
Lewis D’Vorkin helps journalism thrive on the Web. 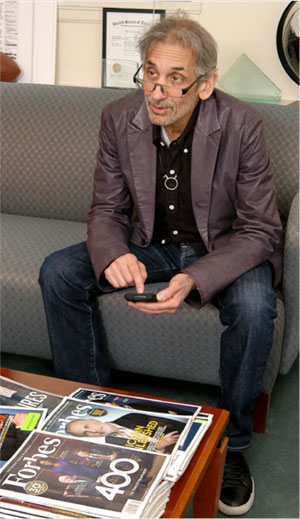 The news business today is a cluttered landscape of shrinking circulation, dying publications, and out-of-work journalists. Lewis D’Vorkin, 74BA, is determined that Forbes magazine will not be among the casualties.

D’Vorkin cut his teeth in the news business as a journalism major at the UI and a newsman for the Daily Iowan, which he edited during his senior year. His post-DI career is filled with mainstream media bona fides, including reporting and editing stints at the Wall Street Journal, the New York Times, and Newsweek, and four years as executive editor of the print edition of Forbes.

But as traditional journalism struggled—devoured by online news and all but left for dead after the 2008 recession dried up advertising revenue—D’Vorkin saw the writing on the wall and shifted to digital. He left Forbes to oversee news content at AOL, helped to start the celebrity news site TMZ, and in 2008, founded his own online-only news operation, True/ Slant.

The experience in digital journalism has given him some ideas on how to create that new model for news delivery. Compelling, well-written, well-reported content and skillfully told stories are a must, he says, a hold-over from traditional media and values that were drilled into him during his time on the DI staff. But in the digital world, revenues are low because for every $1 news organizations can charge an advertiser for a print ad, they can charge only 5 cents for an online ad. In other words, D’Vorkin says, "We’re trying to do one dollar’s worth of journalism for only 5 cents."

That’s why he believes that journalists in digital media will have to be more entrepreneurial and take some kind of an equity stake in their writing. Forbes.com has full-time writers, but it has also opened up its platform to about 1,000 contributors—topic experts, academics, and freelance journalists. Their compensation is reflected by how many people read their stories and how much value they bring the publication.

"It’s not like when I was at the DI and people said, ‘It’s a great story; I don’t care if anybody reads it,’" he says. "That doesn’t fly anymore."

Forbes purchased True/Slant after two years, re-branding it as the magazine’s online presence, while D’Vorkin became the company’s chief product officer. In the two-and-a-half years since, Forbes’ monthly online readership has increased from 15 million to nearly 48 million.

In D’Vorkin’s New York office, a monitor hanging on the wall opposite his desk constantly updates in real time the most-read stories on the Forbes website. Still, D’Vorkin can’t escape his ink-stained beginnings. Piles of past editions of the print magazine lean against his couch and cover the top of a coffee table, while galley pages of the next issue line the hallway outside.

As he admits, "even a 21st century news organization still lays out the magazine on the floor."